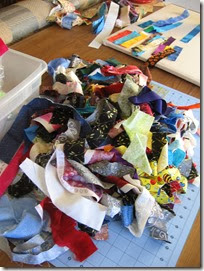 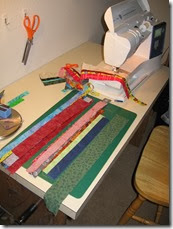 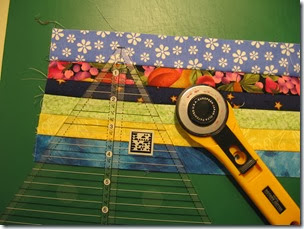 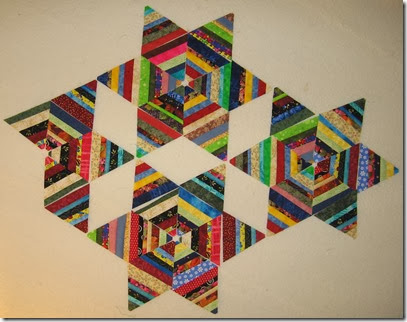 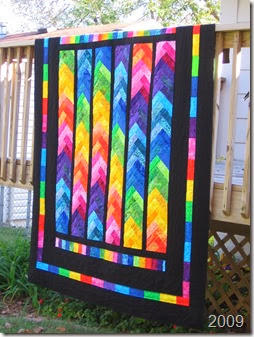 I couldn’t help myself.  I cut up more red, green and white scraps and made little ornaments.  It just couldn’t be avoided! 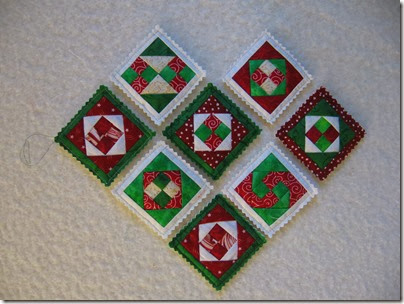 After I made the first little blocks I tried various ways of finishing them.  The first several I tried sandwiching them face down then turning them right side out, but on this scale it looked messy, especially where I couldn’t get all the turned out corners equally pointy or rounded, and the points didn’t look vey sharp as they rounded the edge of the puffy little sandwich.  I wasn’t very satisfied with the end result and almost gave up the idea of making more at that point

Luckily, sometimes the brain cooperates.  Usually if I think of something in the middle of the night, that thought is gone by morning.  This time it stuck.  I thought of adding a little border, outline quilting in the border then pinking the edges with pinking shears.  These will be hanging in a tree, not going through the laundry so there is no reason they have to have a sewn finished edge.  The pinked edge through all three layers of the quilt sandwich looks just fine, and certainly crisper than my previous finishing attempts.  So of course I became obsessed and went from two ornaments to eight.
There are more in progress too.  These little blocks are just waiting for their borders, then I’ll sandwich them with a square of muslin and a square of batting.  I can write on the muslin to turn them into gift tags or to record the year they were made, or both.  And just so you know,  they are not very time consuming, so I still had time to do groceries and laundry the past few days.  I may be obsessed but I still like eating and clean clothes! 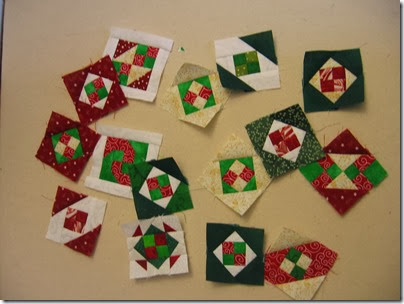 In case anyone else might need a harmless (and yes Katie, I know, crazy!) obsession I prepared a free photo tutorial showing how to add to the Ridiculously Tiny 4-Patch to make an ornament.  It also has alternate sizes to make a 4” coaster instead.