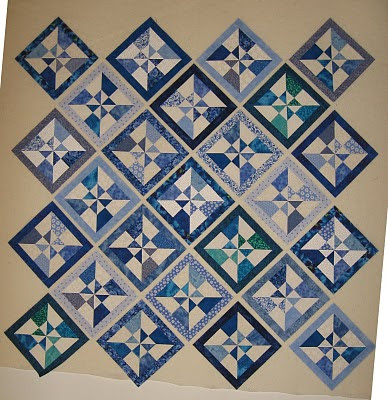 Ta da! All my swap blocks are done. I made 4 extra to make a table topper for my kitchen table and borrowed one to make my layout come out even. I'm auditioning layouts for when I get all your blocks, swappers!

Looking at this I've decided I need to replenish my stash of blues and make myself a blue and white quilt. I'd bought all this fabric a few years back for just that purpose but never got around to it. Now I'm inspired to make one after all. Eventually. Once I have a few more quilts moved off the UFO and WIP lists. (For my family who isn't familiar with the terms, that's "unfinished object" and "work in-progress").

I've gotten a start on handquilting the two quilts that came home basted last week. The first is my daughter's heart quilt. We still haven't settled on a name for it. Christine, any flashes of inspiration? :) 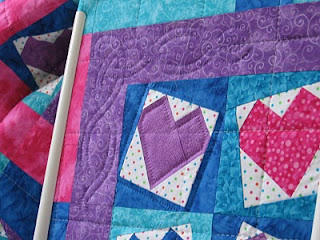 The chain pattern in the purple border is "Avalon" from Quiltmaker magazine's "Quilting Motifs, Volume I" book. Making a template from this was a real treat for me. For the first time ever I didn't have to resize anything to make it fit where I wanted. I also don't have to stretch or contract the motif at any point to make the pattern repeats fit. This one fit perfectly straight out of the book! I must say it made it easier to choose the motif, because the other two I also liked needed fussing with. (Disregard the large grid. That's just the machine basting.)

I've quilted 2 more hearts and the adjoining border areas since I took this picture. That's a total of 3 out of the 48 blocks in the quilt, so I still have a way to go. 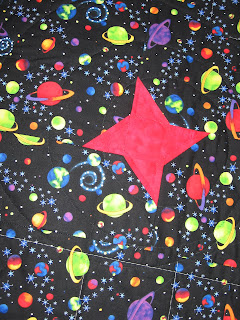 There has been more progress on the astro quilt quilting, as it is quilted much farther apart in a much less detailed design. It is difficult to see the quilting in the picture, due to a combination of poor lighting and black thread on black background. I didn't want contrasting thread to add to the busy look of the background. You can see it a bit better on the back in the picture below if you click on it to enlarge it. The poor lighting really washed out the green in the picture though. Again, disregard the basted grid. 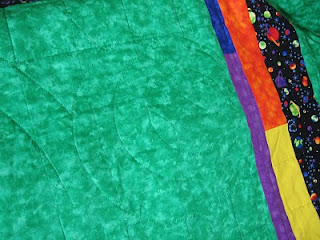 My daughter said it would be OK to work on this instead of hers since she already had a quilt and dad didn't. Frankly, I think she took pity on me because I kept having to re-mark quilting lines that were fading before they disappeared altogether. I marked this one all over before basting so I could see the whole effect, and make sure I balanced the number and size of the circles and where they overlapped. With my daughter's "permission" I am now trying to get all these quilted before I have to squint and mark a third time. I can go back and quilt the stars later.

I bought "White and Natural" batting for the astro quilt because the label on the batting claimed it could be quilted as far apart as 10 inches. I'm a little closer than that, but too far apart for the Hobbs 20/80 batting I've been using in most quilts. The White and Natural is thin and lets me make smaller more even stitches, something I hadn't considered in batting before. I wish I'd put it in my daughter's quilt as well, because with its flannel backing it has extra thickness and I'm getting larger less consistent stitches. What batting do you prefer and why?
at March 18, 2010 5 comments:

On Friday afternoon I called the longarm quilter to find out if and when she could baste two quilts for handquilting. It turned out that she was about to start two fairly large projects, but she could squeeze my basting in before those if I brought the quilts to her on the weekend. Otherwise I'd be waiting over a month. Guess who finished preparing quilt backs on Friday evening and went for a little drive on Saturday? 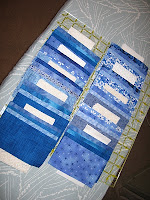 That left me a bit at loose ends on Saturday so I decided to use the time to work on my swap blocks. I cut up enough fabric for the rest of my sets and sewed up a few. I did a few more on Sunday. Then I figured spring was showing signs of actually arriving (yay!) and that would lead me to yard chores and planning flowerbeds and that would lead to less quilty time so I decided I really should just go ahead and sew all the blocks up now. This is how far I got: 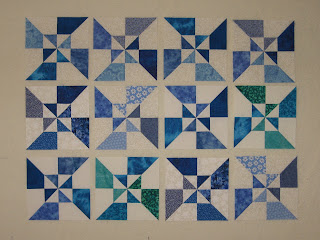 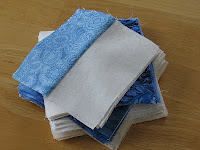 Obviously they still need frames. The rest of the blocks got as far as you see on the right. Then the quilter called and said the quilts were basted and my focus shifted completely! I just had to start quiting and see if the motifs I had planned for them worked as well on the quilts as in my head. Pictures will follow eventually. I'm off to quilt! 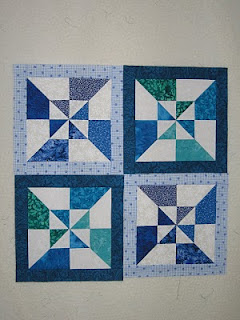 I finished my first two sets of blocks for the APQ Blog Buddies Swap. I hope they're scrappy enough even if they're colour themed. I've discovered my stash is definitely blue-heavy, from all the fat quarters I bought at once a couple of years ago for a blue scrappy quilt that hasn't happened yet. All my other quilts yielded surprisingly few leftovers. I guess I've done a good job (or bad job, depending on your point of view) just buying enough for a particular project. 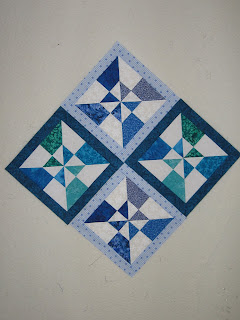 And look at what these blocks do on point. It amazes me that just looking at a different angle makes me see more movement. Do you see that too, or is just my eyes? I just may have to set my share of the blocks on point.
at March 02, 2010 10 comments: