Over 4 years ago, when I designed my paper pieced snowflakes, I only had time to make small projects with them.. I have runners, a pillow and a tote bag sporting various snowflakes.  I always planned to make a larger quilt big enough to snuggle under when it's cold and snowy outside, but I never quite got around to it.

Now I think I never quite got around to it because I hadn't come up with quite the right layout.  Just after midnight one night a couple of weeks ago one little tweak to the design popped into my head.  I got up and tried it out in EQ right away, and my enthusiasm for these snowflakes came roaring back.  Just one little tweak was all it needed. Fabrics came out to play this week while cold snow fell outside, pushing other work to the bottom of my list. I haven't been excited about any new projects in awhile so I am riding this wave of enthusiasm!

Despite the enthusiasm there isn't much to show yet.  I spent time working out cutting directions for the whole quilt rather than cut one block's worth at a time.  I thought that with 26 snowflakes, things could get messy and wasteful quickly if I cut each snowflake's parts individually.  I gathered all my snowflake cutting charts, added up numbers for identical cuts, and figured out how many strips of each fabric in which width would make most efficient use of my fabric to make all 26 flakes. 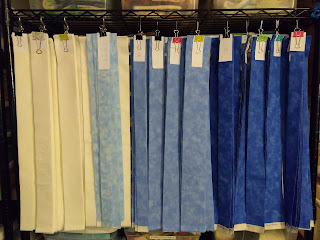 I won't subcut these strips all at once.  The plan is to cut just what I need from the appropriate strips for one snowflake at a time. 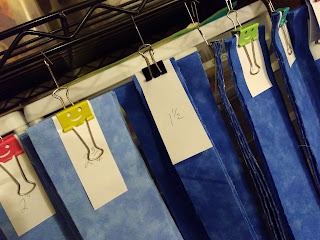 I'm happy to put these smiley face binder clips to good use to keep my strips sorted.  Santa tucked them in my stocking at Christmas, as though he knew Id need them.

I work tomorrow, but on Sunday I plan to start making snow. 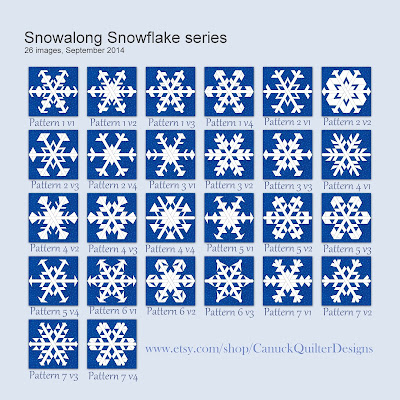 I am playing with my Tic Tac Who? pattern this week, but the family I am making the quilt for are cat people.  Rosie isn't sure she approves of this cat business, but I am adding an applique cat instead of my pieced dog block anyway.  I chose a black cat silhouette pattern from the EQ8 block library and will cut it from black Cuddle fabric once I settle on a size.

My original idea was to simply applique the cat on a blank square where the pieced dog/owl/duck block is in the original pattern. 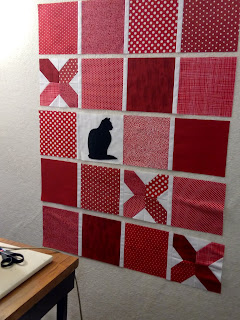 Umm.  Nope.  This applique just doesn't fill the space the way the pieced blocks did.  The cat shape is perfect though, so I'm determined to use it somehow.  I had been so sure this would work that I cut this cat from Cuddle, so I have an applique cat block to play with in some other project now.  However, I am not cutting any more cuddle without auditioning with something less messy first.  There's cuddle fuzz everywhere!

My husband suggested a sheet of cheap poster board. Why didn't I think of that? I cut a larger cat silhouette from poster board and have been auditioning placement.  I don't have a photo of the first try, but it did lead me to fill in the blank block with another X instead of trying to plunk a cat in it. 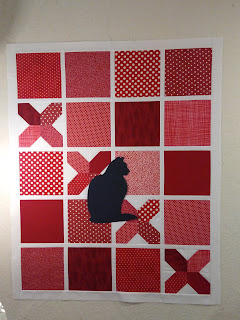 I think the size is better, but I don't like having the cat pretty much in the center of the quilt. 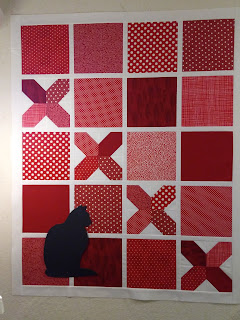 This is a bit better, but I think the cat gets a bit lost against the darker reds.  There's something else bothering me about this one, but I can't quite put my finger on what exactly. 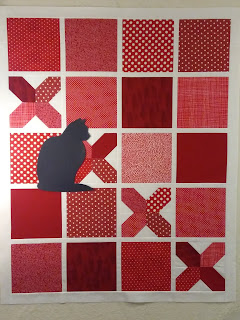 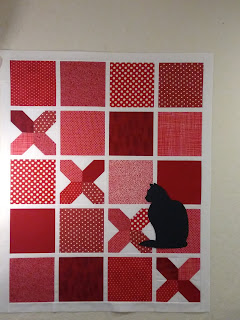 I think I like this one best.  I am going to let that simmer for a little bit while I baste and quilt the quilt.  I plan to have the cat be just a silouhette, so I don't want to quilt inside or all over it, but it is too big to leave the area under it unquilted.  I am going to quilt the background, then applique the cat on top.  I think that should be OK. If you have any words of wisdom against that plan, please speak now before I quilt!

Which side is which?

You may recall that back in August I decided the ISU Cyclones baby quilt I had almost finished quilting needed to be larger to fit my college son instead. I designed extra borders, figured out the math, bought more fabric, prepared to learn to add quilt-as-you-go borders, and made this instead.

The more I looked at the first project the more I thought it really wasn't Matt's style.  When I was organizing patterns on the wall at the LQS where I work, Spark by Maple Island Quilts caught my eye.  I knew Matt would like this better, and that the ISU fabric with the grey background would suit him better as well.

This was the quickest top finish I have ever had.  It took me about 5 hours from starting to cut to finishing the top. Making the back took longer because I couldn't leave well enough alone.  I made my daughter a quilt in her high school colors last winter.  I pieced her name into that one, and decided I should do the same for Matt's college quilt.  I was also determined to use up leftovers and the fabric I had bought to enlarge the previous Cyclone quilt, so I needed to sit down and design something.  It morphed three times, but here is what I ended up with.


I paper pieced the name using Happy Sew Lucky's Vintage Alphabet pattern.  It's a great, crisp alphabet.  There is even guidance on how to space different letter combinations. I love that.! 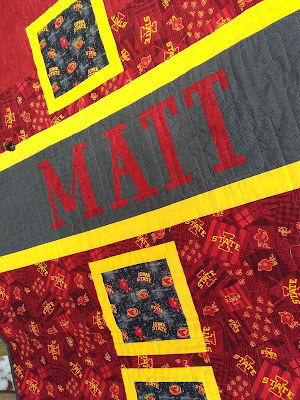 Honestly, I think I ended up liking the back better than the front.  So did my friend Chris of Urban Loon Studios who did the longarm quilting for me.  (I couldn't get Laura's quilt finished and quilt this one too!)  My co-workers at the shop liked the back better as well.

My first guess was correct though.  Matt's style is definitely grey and simpler.  Every time I've seen him use it since he pulled it out from under the Christmas tree, that's the side he's showing off. 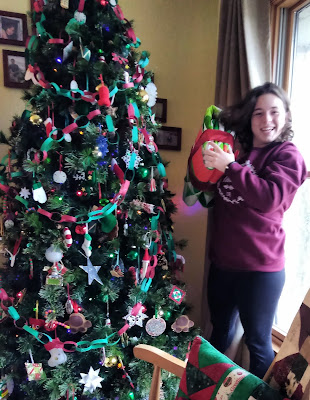 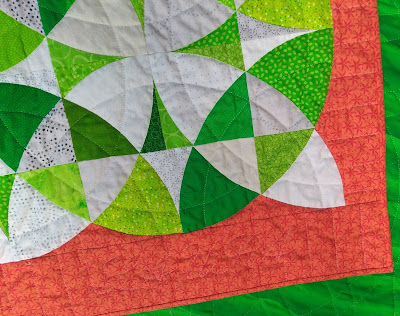 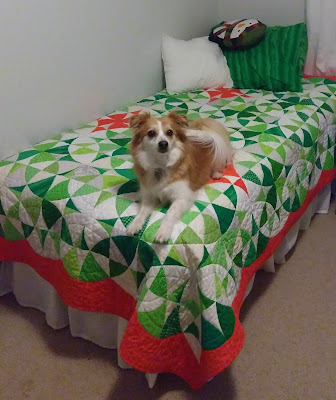