Summer is in full bloom this fall!

Today may be the official first day of fall, but summer is in full bloom in my sewing room.  I tweaked the bloom block I shared in my previous post.  I just reshaped and shrank the leaves a little to make them a little bit less prominent. 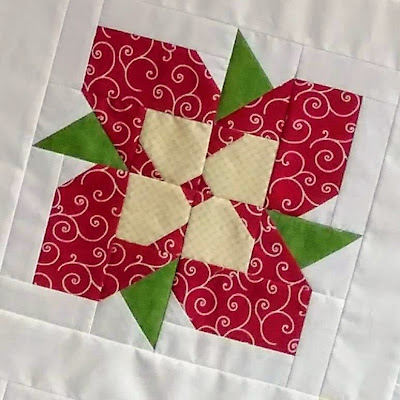 Once the block was just the way I wanted it, I dithered about cutting into the fabrics I bought.  I knew I wanted to use all the reds, but I was pretty sure I didn't want only reds.  I was also pretty sure I could use the pinks as well, but I wasn't sure about the blue, or the aquas.  I didn't want to waste fabric by making the blocks then not using them.  Really, that little internal discussion wasted way too much time!
In the end I convinced myself that I could just make a secondary project with any blocks that didn't make the final cut for the quilt.  I cut pieces for one block from each fabric, made those 10 blocks, and what do you know, I liked the combination just fine!  I cut another set to make another 10 blocks and headed back to the sewing machine...and the pressing board...and the cutting mat.
I designed the block using stitch-and-flip/lost corners/folded corners (pick your label!) instead of cutting triangles and dealing with bias edges and at least one non-standard shape.  It makes assembly easier, but it does involve a lot of trimming.  At least they are pretty trimmings.
Sashing and cornerstones came next.  I chose the same yellow as I used for the small petals to avoid introducing yet another fabric to make things busier.  I definitely wanted cornerstones.  Cornerstones help me line up blocks nicely, and they help me avoid measuring long strips for the horizontal sashing. 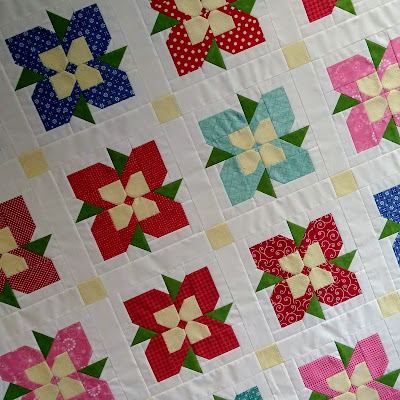 That's a terrible photo.  That's what happens when I take photos in my sewing room at night.  Nevertheless, you get an idea of how the blocks play together.
Since I like to avoid measuring and sewing long strips, you would think I would avoid multiple borders.  I really dislike measuring and pinning borders.  I stress about it and I dither and even when I do get to work on them I'm slow as molasses.  It took me all afternoon to add the background border (I guess you could call that the outside sashing) and two more narrow borders. 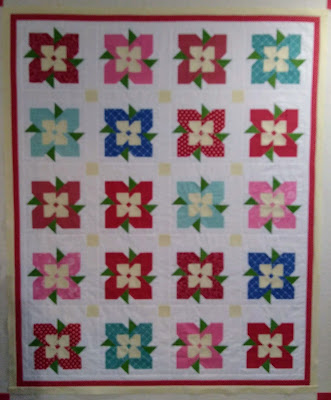 If I dislike adding borders so much, why do I design quilts with borders?  I do it because borders can help pull everything together and transform the quilt from OK to one that makes me do a happy dance.  Not every quilt needs them, but this one certainly does.  Just to be clear, those narrow borders are not transforming the quilt all on their own.  They look rather uninspiring right now, but just wait until you see them paired with the final pieced border.  There are white dots on red involved, and a little bit of yellow gingham-like print.  I'm working on that last border now, and I'm getting ready for the happy dance!
Happy quilting!
Joanne
at September 22, 2020 18 comments:

Hanging on to summer

After a scorching summer complete with drought, we finally had some rain this week.  You would think that after the heat, I would also welcome the much cooler temperatures that came with the rain, but it's unseasonably cool.  Aren't I picky?  Too hot! Too cold!  Sigh. I'm sure things will warm up again for a few weeks at least but right now, it definitely feels like fall outside.

I love fall, but early September is too soon!  I have decided to hang on to summer just a little longer and bring some fresh bright blooms into my sewing room. The blooms in my garden are definitely done, as I gave up trying to keep thing watered, but here are the raw materials for the sewing room garden. 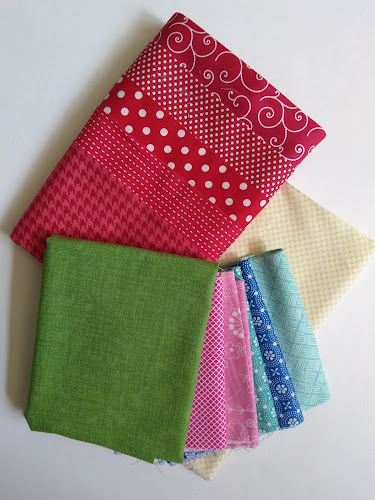 I'm not sure if all those fabrics will make the cut. At the store, I couldn't find the right fabrics to quite match the picture in my mind. It was hard to rethink the colour plan on the fly, so I ended up buying a little more so I could play around a little.  I'm not sure about including the bright blue, but the light aquas would be very bland on their own against the red.  I could use only the red, and maybe pink prints, but that might be a bit too much red for me.  I'll make blocks and see how they all play together.

I made a sample block with scraps. 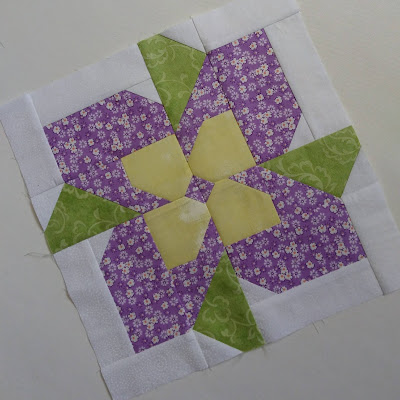 It needs a little tweaking.  I think the leaves are a little distracting, so they need a little work.  I'm getting closer to a final design.  I may make enough progress to share more next week.

I'm off to sew! Have a good weekend!

I have not been consistent about posting my temperature quilt progress!  Let's see if I can do better for what remains of the year.  Here is the quilt top so far, up to date through August 31. It's been rather fun to let go and allow the daily temperatures to select color placement for me. 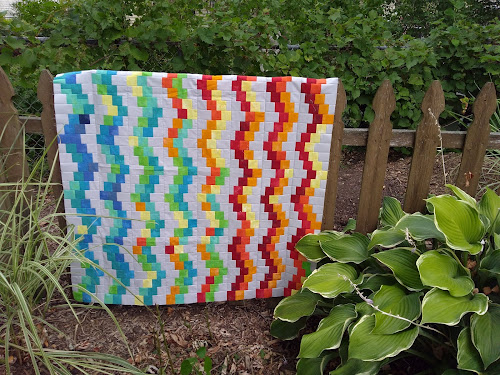 I photographed it sideways because my fence is short.  January is on the far left, August on the far right.  You can see it has been hot this summer.  The darkest red is for everything above 30 degrees Celcius (above 86 F), and a lot of those were hovering in the mid-thirties C (mid 90s F). 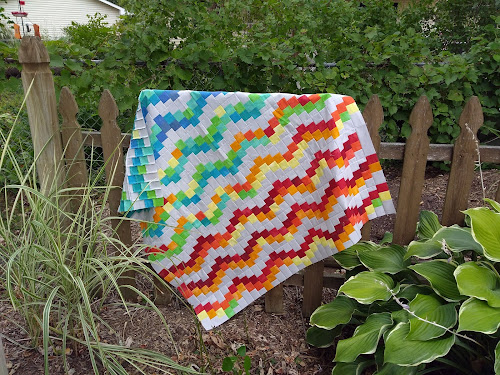 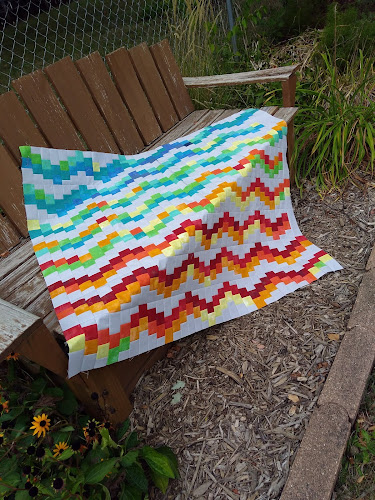 I underestimated how many of those days we'd have.  Either my memory of past summers is poor or we have had a particularly hot one in 2020. I suppose I could go look up past years' data, but I'm really not that motivated! At any rate, I ran out of the dark red and had to scoot to the quilt shop for more.  I may or may not have left the store with other pretties to make the trip worthwhile.
OK.  More fabric did come home with me.  More on that another time, after I take pretty pictures of pretty fabric :)
In the meantime, you can still get your copy of the Temperature Quilt pattern here.  You can start now and record through next summer, or you can catch up all at once on this year's data, or you can tuck the pattern away for next calendar year. Don't forget to check out my post from March about getting organised for Temp Quilt success.
Happy quilting,
Joanne
at September 08, 2020 12 comments:

2020 has been a doozy of a year, and there have been times when crawling into a bunker and waiting for it all to pass has been mighty tempting.  Turns out a quilted blanket fort is better.  Crawl in with a dog and a stuffy and you're bound to feel  better.  Rosie insists. 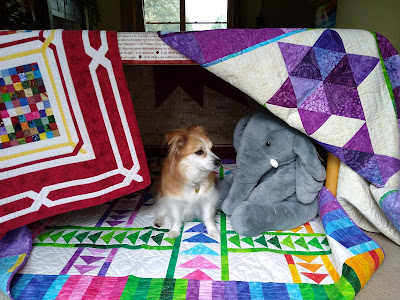 Anyway, in March, the pandemic led to me being laid off from my job at the quilt shop.  Scary stuff, but as my husband's job is secure I had the luxury of stepping back and taking stock of life. To make a long story short, I took a deep breath and decided to not return to the quilt shop when it reopened. I am concentrating on Canuck Quilter Designs instead.
That was a big change.  Though I miss the customers and my co-workers, I'm happy to report that change led to a cascade of small positive changes and I'm feeling better than I have in a long time.  As an added bonus, feeling better has given my creativity a much needed boost! 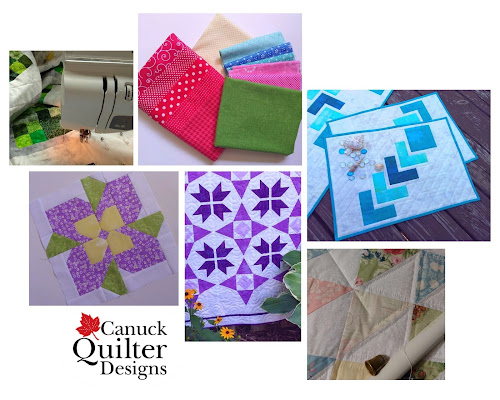 Some of these are almost ready to share.  There are 3 pattern releases coming up soon. I have new design ideas simmering, fabric pulled, and I'm excited to start sewing them up.
Between the designing and sewing, I have also been working on the business side of Canuck Quilter.  Last week I hit publish on my brand new website!  Creating a business website, as opposed to adding pages to the blog, has been on my to-do list for years, and I finally did it.  See the little maple leaf favicon in the tab beside the website name? It's ridiculous how happy I was to figure out how to add that little detail. Well, you might need to click through to the site and see it on your own screen, because it's pretty tiny in this screen capture shot. 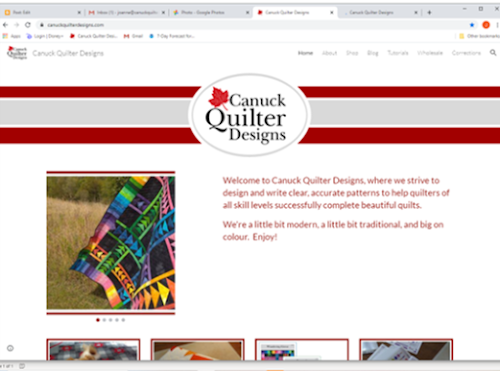 The blog will still be here at this address, but some other pages are now shared with the website.  You can access everything from the tabs below the blog header, and you can access the blog from the tabs on the website.  The two will work together, so whether you find me find me at www.canuckquilterdesigns.com or here, you'll be able to access all the same content.
Finally,  I invite you to sign up for my newsletter.  That's also been simmering a long time, but I'm excited to start sending out quilting inspiration, tips, and occasional subscriber bonuses.  At the moment the plan is to send an update out once or twice a month.  If this is something you think you'd enjoy finding in your inbox, you can sign up here, or use the form at the bottom of the page or in the sidebar.
If you'd like to get just the new blog posts delivered to your inbox, where they are formatted to be more phone-friendly, you can sign up for that on the sidebar as well.
I'm off to play with fabric now!
Happy quilting,