Reinventing the wheel (or at least the HRT)

I indulged in a few long afternoons of playing in EQ8 recently.  As usual, what I ended up with bears no resemblance to what I started with. This instance was rather extreme: I was thinking flowers and somehow ended up with a sailboat.  Go figure!

After I drew it, I printed out the cut sizes the software suggested and happily started cutting and sewing, only to find that my sails were not turning out the size they should.  I suppose I could have winged it and fudged all the other block parts to make it all fit together, but I'm really not an improv kind of quilter.  I can appreciate a well-made improv quilt, but I don't particularly enjoy the process myself.  I like to know what to cut to what size to make things fit in a predetermined way.  So there.

This of course meant that I needed to figure out why things weren't working out. I double- and triple-checked my seam allowance.  I cut more fabric, checking my measurements.  Nope, still not working.  I finally figured out that my problem arose from having to guess how to line up the triangles when I sewed them together. I wasn't hitting the sweet spot.  I thought I knew where to align one piece relative to the seam allowance on the other. I was wrong, though it would have worked if the geometry of that long triangle hadn't messed up the works. 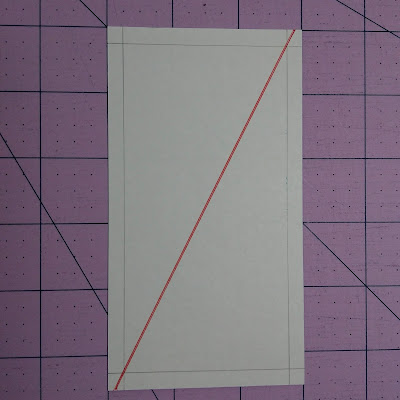 Well, that's a fine how-do-you-do! I know there are rulers out there that take all this into account.  In fact, I have one on my wall that would suit, except that it isn't large enough for the unit I needed.  Also, the quilt design I have in mind uses just a few boat blocks, and I'd hate to ask folks to buy a specialty ruler for just a few blocks.

I humphed and harrumphed and decided there must be  away to make these a little larger and cut down to size so alignment wouldn't be such a bother.  I took in ideas from various tutorials, and spent half the afternoon stirring them all together and finally came up with something that worked the way I wanted. 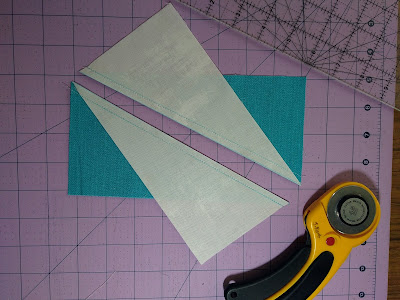 I spent the rest of the afternoon figuring out the math to know what size rectangles to start with to end up with a given size.  It would be a pain to use trial and error every time I want a different sized unit.

There's a tutorial in the works to share the details.  In the meantime, tell me, have you used HRT in any projects?  If so, do you have any tips or trick to share?

Off the fence about quilting On the Fence

It's a good thing I had quilting distractions the last few weeks.  Just as I was building up a head of steam to write a blog post then tackle less exciting business tasks, our internet connection cut out.  Literally. A cable bundle in our neighbourhood was accidentally cut. It took our provider more than 2 weeks to restore our phone and internet service.

All those "exciting" business tasks needed internet so had to be put on hold. What's a girl to do?  Turn on the sewing machine, of course.

The stack of tops waiting to be quilted is getting distressingly tall, but if I stop to think about it I get discouraged and none of the tops get quilted.  I plucked up my courage and plucked this one off the top of the pile. 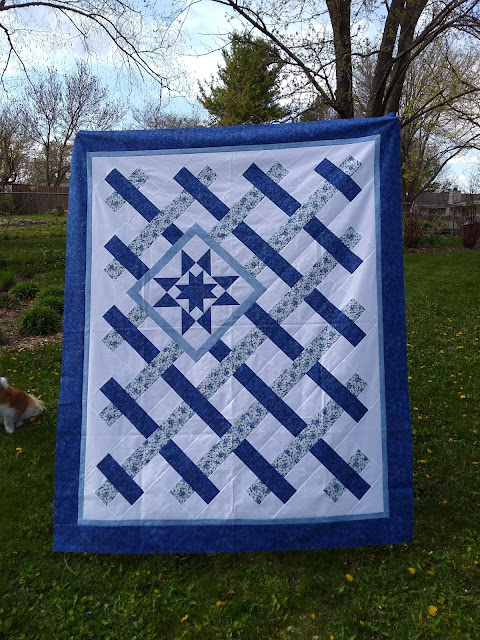 The pattern has been waiting for its cover quilt.  The top has been ready for months but right about the time I was ready to quilt it, the pandemic turned things upside down.  My husband started working from home and we set up an office space for him in the other half of my space, where I usually baste larger quits.  This quilt isn't very large, but it is a little wider than my table.  I thought it would be easier to wait until the larger space was available again.  I think you can all guess how that turned out.  The university is encouraging people to work from home as much as possible, so the home office is here to stay for the foreseeable future.

I don't want to wait forever to release the pattern or to use the quilt, so it needed to be quilted. I only have so much budget for quilting-by-check, though that would be easier. Then again, maybe I have an idea of what I want and I couldn't afford the cost of custom quilting. But sending it to a longarmer would free up time for other things...  Let's just say that I spent a lot of time sitting on the fence about what I should do about quilting this quilt.

I finally got off the fence and made a decision. I committed to quilting it myself and went ahead with basting in sections on my cutting table.  It wasn't as much of a pain as I anticipated.   I just had to make up my mind and do it. 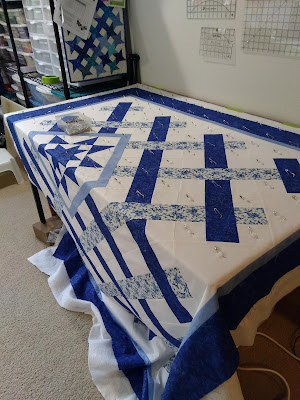 I thought I would get this quilted quickly.  Surely, a day, two at most, should do.  I should know better!  Quilting always takes longer than anticipated. This time, it took closer to a week.  Some of that time was spent pondering what to do next, or whether what I was doing was really a good choice. (It turns out I didn't have as much of an idea of how to quilt it as I had thought!) A lot of time was spent wrestling the quilt sandwich through the throat of the machine. Finally, let's face it, I'm not a fast quilter!

First I stitched in the ditch in the lattice using my walking foot.  Stitching straight lines in a single direction at a time, I didn't have to turn the quilt much, so the using the walking foot was less time consuming and more convenient than using the ruler foot and straight ruler.  Next, I quilted a motif in the background areas of the lattice using the ruler foot and one of my Westalee templates. 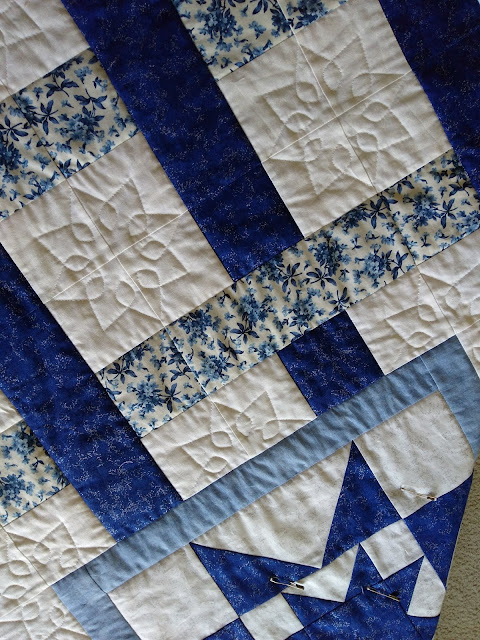 That actually went very quickly and I patted myself on the back until I spread it out.  It was OK, but...I was not 100% satisfied. The flowers seemed a little lost somehow when I spread out the whole quilt.  What to do, what to do?  Sleep on it, of course.

The next day I drew out several options on paper, all based on what I quilted the day before because I was not prepared to pick out all the previous day's work! 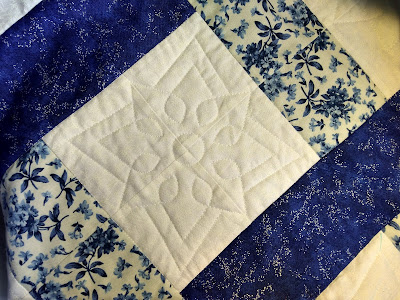 Well, this filled the space a little better, and dressed it up a little.  It was more time consuming that the previous day's stitching as there were a lot of starts and stops, and switching rulers for the center circle. I was happier with the result, but then had to decide what to quilt in the lattice.

My original plan was to not quilt anything in the lattice strips beyond the ditch stitching.  However, with the densely quilted white space, the unquilted lattice was puffy, in a messy sort of way, and looked unfinished.  After much deliberation, I agreed with my husband that things were busy enough without adding too much dense fancy quilting to the lattice.  Plain straight lines evened out the quiting density well enough. 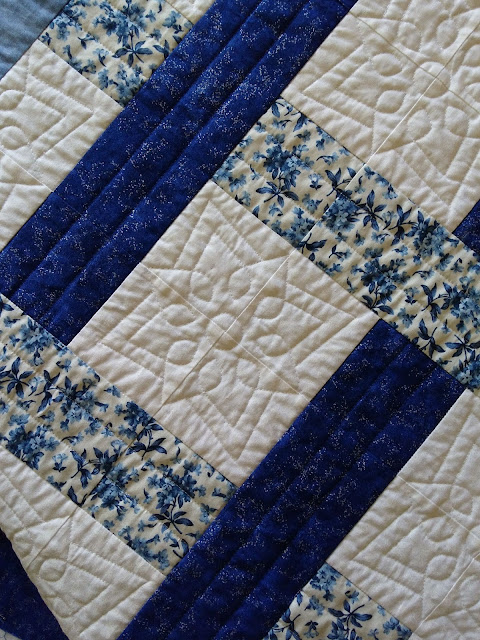 Moving on to the edges, I was momentarily stumped figuring out how to transition from the open sides of the lattice to the surrounding background.  Echo quilting to the rescue! 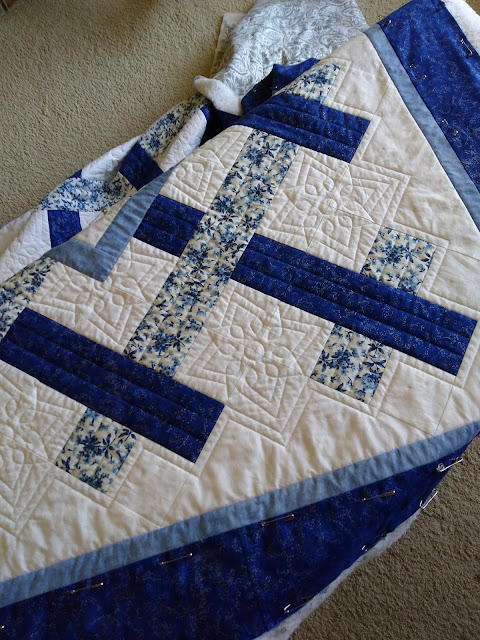 With the center now defined by the echo quilting all around, the rest of the background became a sort of border area.  Again keeping in mind how busy the flower motif was, I decided to give the eye a quieter place to rest in the border with some plain piano key quilting.  I used the ruler foot and straight edge for these lines. 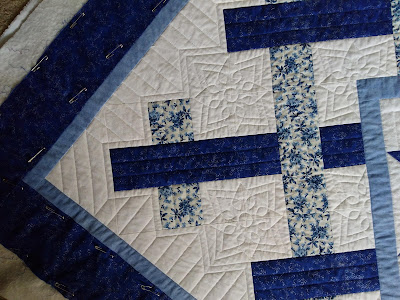 I had all sorts of grand plans for some sort of arc design in the dark blue border, but I decided the quilt was already busier than I had planned and I didn't want to add more "busy".  I thought of mirroring the straight line and peaks from the white edges, but that would have left the valleys between the peaks, right up by the edge of the quilt, less densely quilted.  I know from experience that less densely quilted borders end up being very friendly - they wave!

My husband had the answer.  He asked why I didn't just carry the straight lines over all the way to the edge.  Huh. I was so wrapped up in the idea of mirroring the other side of the border that the simpler design just never occurred to me. 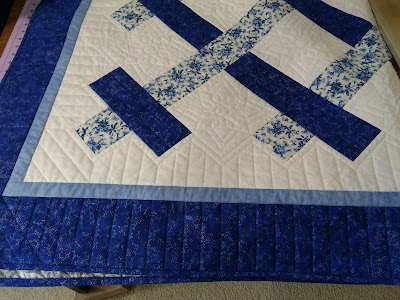 It's simple but I think it works, and it doesn't distract from what I quilted in the center.  Plus my border doesn't wave.  That's a big plus! 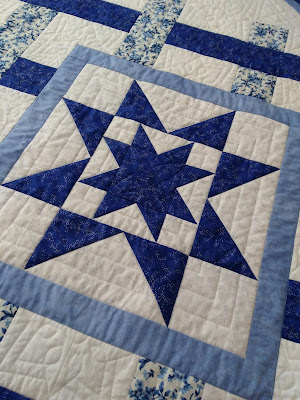 I also chose to keep things simple in the focus star.  The straight lines tie in to the borders and the lattice.  Using the ruler foot and straight edge quilting ruler this was easy and quick to quilt, also a point in its favour. 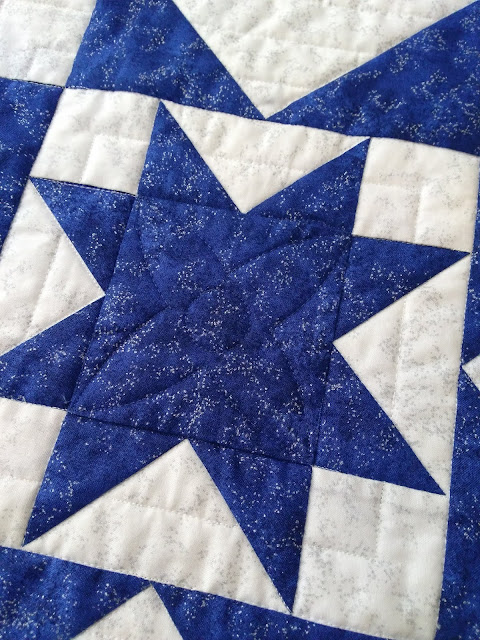 Quilting in the ditch around the stars and a little extra something in the center to flatten out a little poofy bit finished off the quilting.

The quilt still needs a photo shoot for (hopefully) glamour shots.  Maybe I can conscript a family member to help with that this weekend!

That's half of what I've been up to recently while I was out of digital reach.  What has been under your needle?