Leap Day Launch is here!  I'm releasing four new patterns on a date that only happens every four years. 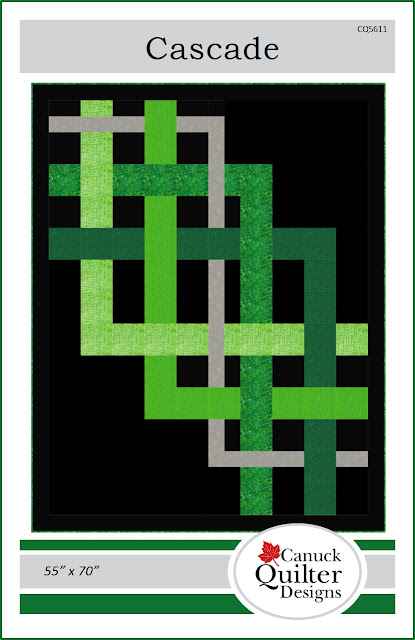 Cascade is a bold graphic design that comes together very quickly.  Large pieces let your fabric choices do most of the work of creating the wow! factor. For my first quilt I chose 4 tone on tone greens on black but don't let that limit you.  Anything goes!  I really think any fabric style will work with this design.

Look what I chose for my second quilt top. 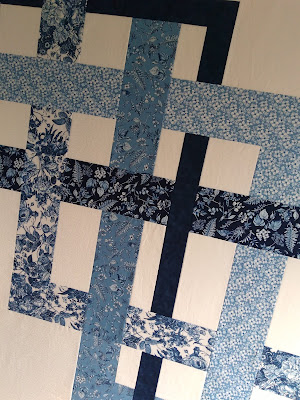 If you have followed this blog for awhile, you know that florals are not my usual choice.  Blue, yes.  Floral, no.  In this quilt I love both!  These florals are Botanical Etchings from Connecting Threads. 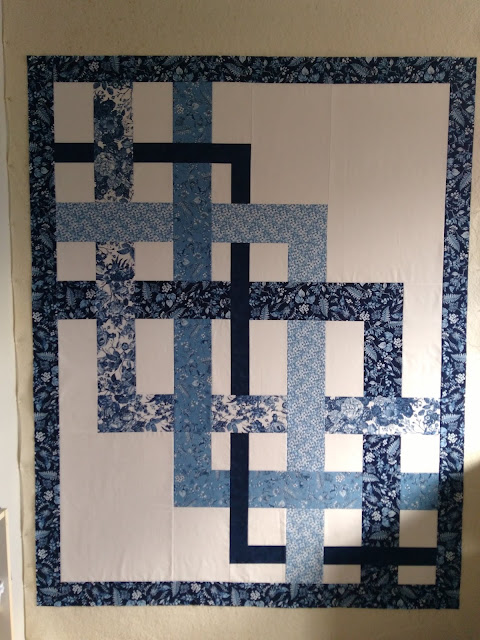 Notice that the floral version has a print border, while the cover version floats on the background color.  Making the border from the same fabric as the background, as in the cover quilt, makes the intertwined fabrics float on the background for a bold modern effect.  Choosing one of the prints for the borders frames the design in a more traditional way.  The fabric amounts in the pattern list the border separately to make it easy to choose either option.

I really wish I had had time to quilt these before launch day.  That was the plan. I'll just have to share them again when they are quilted and bound!

In the meantime, you can own your own copy of the pattern.  Cascade, as well as the other three new patterns, is on sale at 25% off regular price now through March 7th in my Etsy shop. 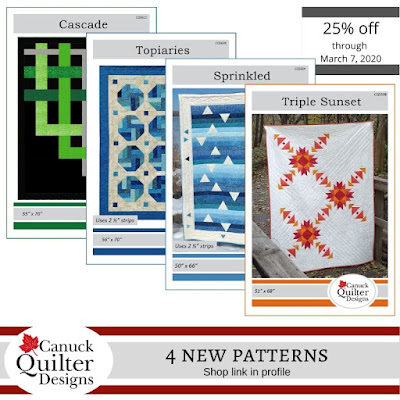 You have seen a peek of Topiaries recently and I revealed Triple Sunset last fall.  I'll share more about Topiaries and introduce Sprinkled over the next few days.  For now, I'm off to the Quilting Connection in Ames, IA for a live showing of these and other quilts.  Pop in this afternoon if you're close by!
at February 29, 2020 5 comments:

I wrote a few new quilt patterns in the last month or so.  My creativity seems to be waking up after a long snooze!

Cascade will be one of four new Canuck Quilter patterns making their debut on Leap Day at a pattern launch event at Quilting Connection in Ames. Leap Day just seemed like a good day to do something special.  If you are local, I hope you'll pop in sometime that afternoon to say hi and check out my quilts.

I was excited about this one and I immediately cut into fabric to test it.  I conveniently had a snow day off from work the next day and by that afternoon I had a completed quilt top.  That is a new record for me.  Granted, it has a lot of big pieces, but still.  I usually stall at adding the borders but I pushed through this time. 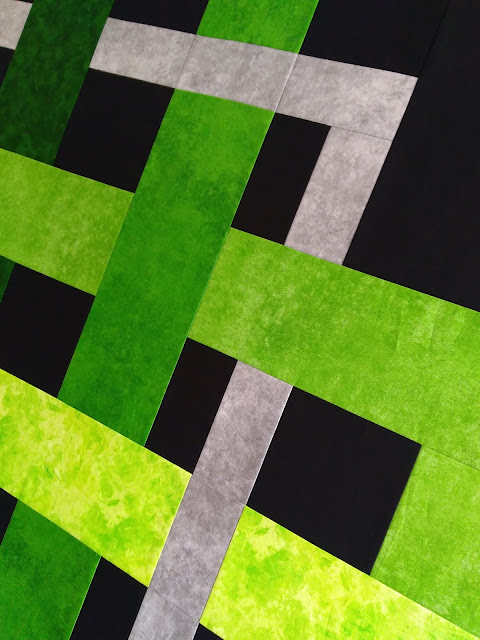 It still needs to be quilted. I think I'll try a different design in each color, and very simple straight lines in the background.  I don't think I'll get it done in time for Saturday.  Being sick for over a week derailed my plans!  Still, I'll have the top, and another version in a completely different colorway and fabric style. Wait till you see the difference fabric choice makes!

I'm so happy with this one that I won't dwell on the fact that I just replenished the green scrap collection I worked hard to deplete in January.

Check back on Saturday for the full top and a pattern launch sale!
at February 25, 2020 8 comments:

I have a new pattern in testing, and while the testers are hard at work, I need to finish the cover quilt so I'll have the cover ready when the final revised pattern is released. 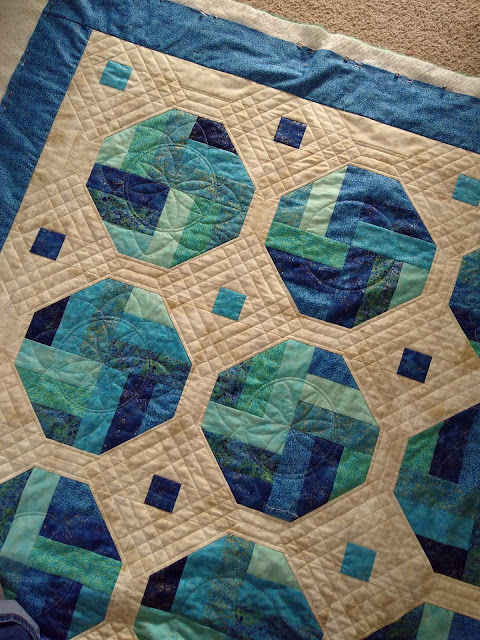 I think you can guess that I have been getting to know my quilting rulers.  I planned to quilt this simply and lightly but the rulers took over.  I just love how crisp things look when I can trace instead of quilting freehand.  I also love that I don't have to wrestle the quilt quite as much as when I use my trusty walking foot.  My shoulders are much happier.

Since I took this photo, I finished quilting all the blocks.  Now I need to figure out what to quilt in the borders.  Ideas are simmering, and I hope I end up with a plan that I like as much as the design I quilted in the blocks. 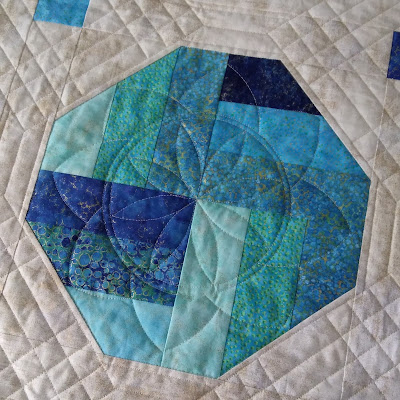 I am enjoying playing with just a few basic Westalee rulers, layering shapes to build up different motifs.  This one uses the Circles on Quilts templates for the circle that I used as a base.  The petals inside and outside the circle were quilted with the 6" spiral from the Template Starter Set.

This wasn't my original plan.  I tried using the circle as a spine for a feathered wreath. 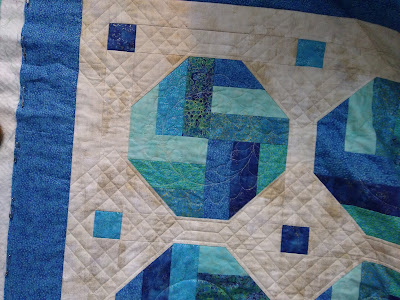 It wasn't bad, but it just seemed to be swallowed up by the piecing, and overwhelmed by the crosshatching in the cream background.  I'm glad I decided to quilt all the crosshatching and let the block ideas simmer while I did that.  My new design seems to have more presence in this block.

For now, it's bedtime.  Maybe I'll have a flash of inspiration for the borders as I drift off to sleep, and if I'm lucky I'll remember it in the morning!
at February 07, 2020 13 comments: 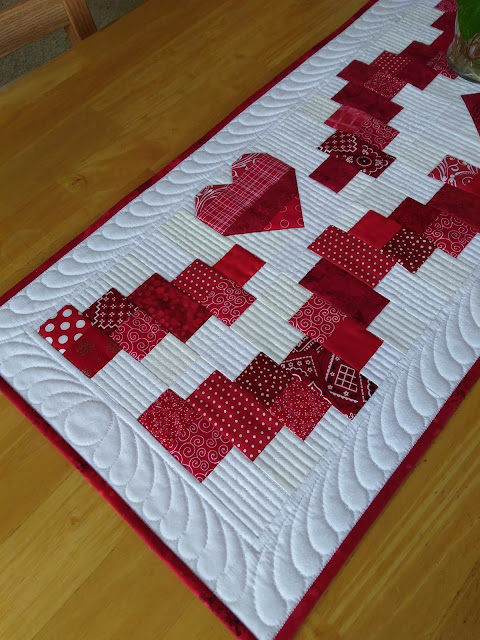 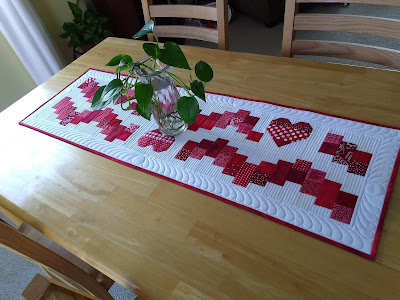