When Sherry from Powered by Quilting invited me to participate in a blog tour for her newest signature collection from Island Batik, I plugged the digital fabric swatches she sent into a design I'd been toying with on and off in EQ.  I liked what I saw and I couldn't pass up the chance to make Ripples Cubed in her Plum Pudding fabric. 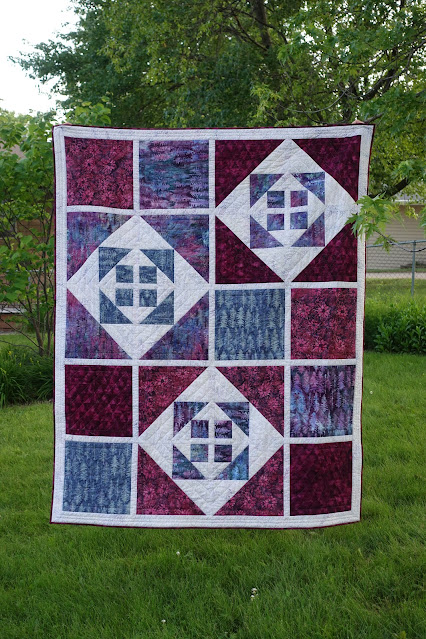 Ripples Cubed was designed with large pieces specifically to showcase pretty prints.  I think it certainly did the trick for the Plum Pudding batiks. These are not my usual colour choices, but I couldn't resist the mix of rich jewel tones and more subdued accents.  There's a great variety of textures in the prints as well.

I shared some of the quilting process in this post last month.  I used Westalee quilting rulers to quilt the designs in the darker triangles.  I also outline quilted inside the medium triangles to define those shapes a little.  I think it makes it look a little more polished.  It's difficult to make out the quilting in the center squares and triangles in the photo.  It looks better in person, and I'm pleased with how it dressed up the blocks. 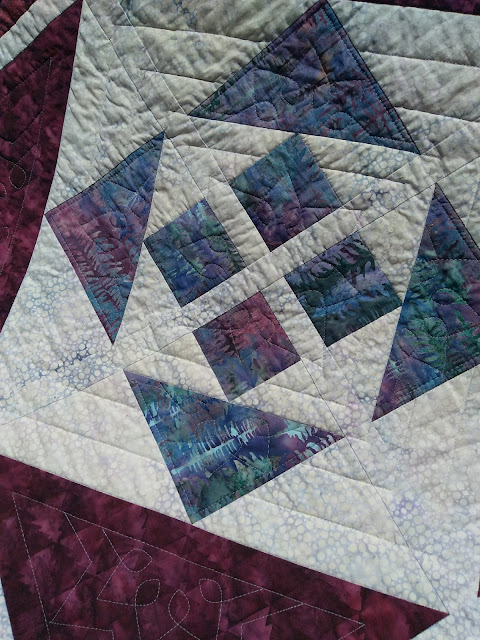 I let the quilt sit a couple of days while I pondered how to quilt the background and the plain squares.  You can see in the photo above that I quilted multiple echoes of the square-on-point shape that appears in the background.  As I worked my way to the center with the echo, I realized I could change the angle of the lines just a little bit in the innermost echo so that it extends the designs in the small print squares into a single design.

I thought about practicing different designs in the plain squares, but in the end decided to keep things clean and simple, just like the piecing. Well, I was also running out of time, and the straight lines were quick!  To tie this quilting to the rest, I first quilted a frame 1" inside the sides of the square, just as I had quilted a 1" frame inside the large triangles. 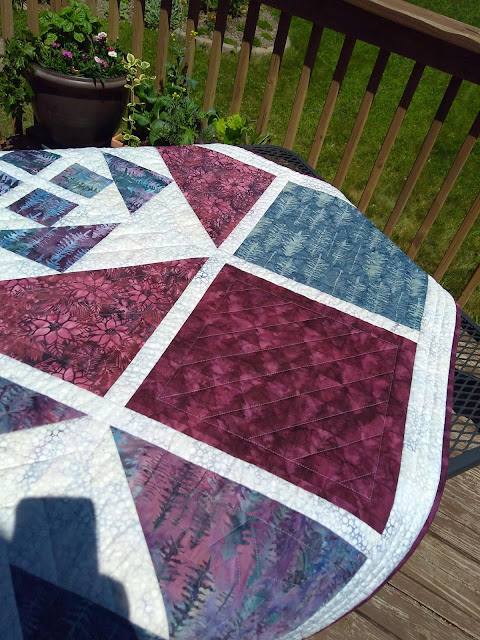 I finished off the quilting with straight line quilting all the way around in the border, then added a contrasting binding. 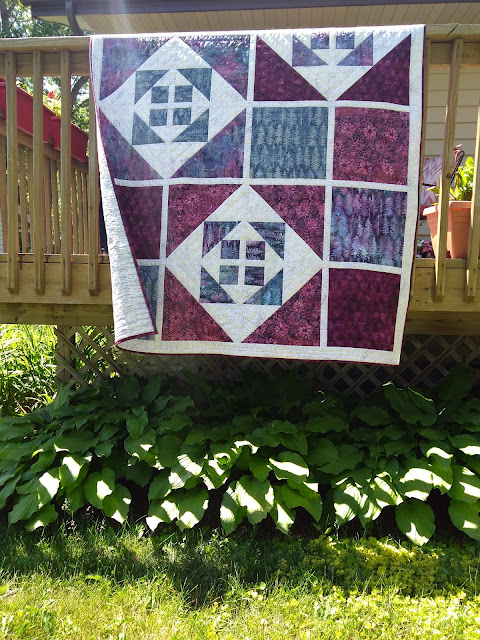 If you're wondering where the quilt's name came from, I can say part of the design reminded me of ripples radiating out from a stone dropped in water.  I added the cubed part because the shapes are squared, not rounded like true ripples.  And yes, it's 2-dimensional, so would be "squared" rather than cubed, which would imply 3 dimensions, but there are 3 ripples, and a superscript 3 is read a "cubed"....I admit, the name's provenance is kind of convoluted, but this is a quilt pattern, not a math textbook, so just go with it, OK?  :) 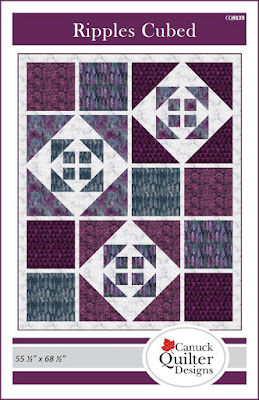 If you'd like to make your own version  of Ripples Cubed, the pattern is now available as a PDF download in my Etsy shop.  Many thanks to Tammy H, Kathi Kivi, Sandie L and Pamela Dee Deringer for testing the pattern. I'll share my testers' lovely and varied versions later this week to provide inspiration.  Let's just say, there isn't a limitation on fabric genre for this one! 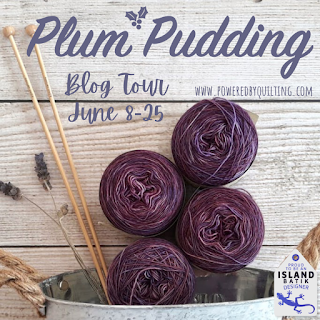 To see more projects made with Sherry's beautiful collection, visit other stops on the blog tour this month.  Links are included below.

I can finally share the finished, quilted and bound Small Change! I love how it turned out. 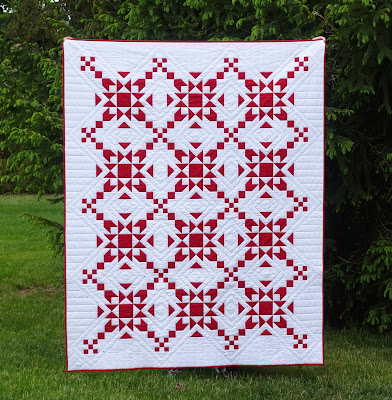 I shared a bit in February about the frantic sewing to meet the pattern deadline for a catalog.  I actually finished the quilt top in less than a week!  After more than 20 years of quilting, I sew a little faster than I used to.  What hasn't changed is my enthusiasm for seeing a stack of cut fabric pieces turn into a finished quilt top. 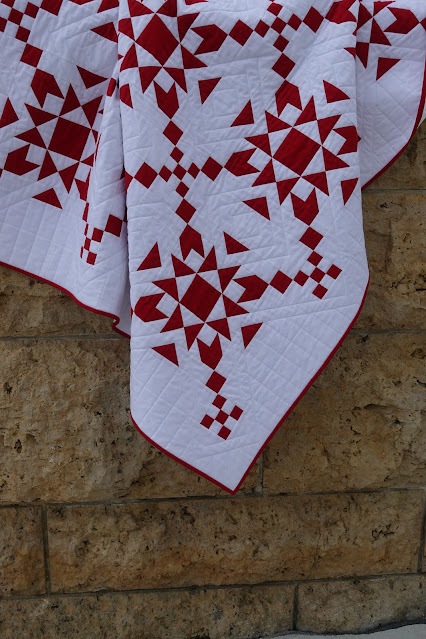 I wrote about my quilting process and choices in April.  I quilted this entirely in straight lines with a walking foot.  By the end of that I had a few more ideas on how to minimize the need to turn the quilt around under the needle.  (I'll make a note to share more about that later.  Maybe even a little video...though I make no promises about the video, as I'm still working out the details of filming anything useful.)

I had to wait for decent weather and for a quilt holder to be available, both at the same time, for the quilt photo shoot, which explains the delay in sharing the finished quilt and releasing the pattern.

Who noticed the inset picture on the pattern cover?  That inset is why I called the pattern Small Change!  When I was playing around in EQ8 trying to finalize the design, I discovered that changing the sashing and border fabric resulted in a completely different quilt.  The block is exactly the same in both quilts! 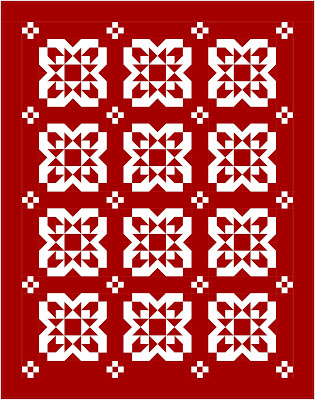 I have plans to make version 2.  Would anyone be interested in a Small Change Quit-along to keep me company and keep me accountable?  You could make either version, in any of the four sizes, baby to king.  I'm thinking of late summer or early fall.  Let me know in the comments if this might interest you, so I can gauge interest.

I must thank my four wonderful pattern testers.  Here are their versions, to give you a taste of the possibilities! 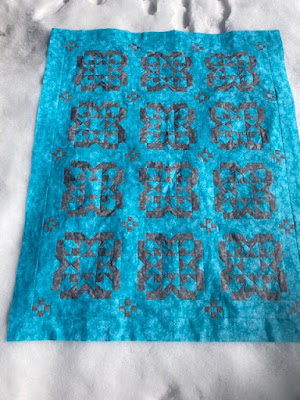 Carol Andrews also chose to make version 2.
Now, on to the next project.  The blue florals I shared on May 8th are well on their way to becoming a quilt.
Happy Quilting,
Joanne
at June 02, 2021 8 comments: