The last few days I have been busy working on a set of placemats and a table runner from 8 fat quarters and a bit of solid cream yardage.  I pretty much knew what I wanted for the placemats, and they came together fairly quickly. 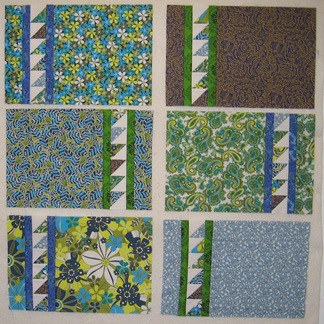 Recently I saw a few zigzag quilts and thought something like that would look fun in these fabrics.  A little nagging doubt at the back of my mind warned that while it would be fun it might have too much white space to really go with these placemats.  On the other hand the zigzag would be so much fun.  I ignored the nagging doubt and pushed ahead.
I spent all day yesterday fighting with 64 HST’s.  Why do some come out perfectly square, and others, using exactly the same method and care, come out wonky?  Anyhow, I trimmed and sewed them all into submission and did end up with a fun zigzag.  It really needs a border, but I don’t have enough of anything suitable in my stash right now, so it is on hold pending at stop at the fabric store.

As the little voice in my head warned, it does have too much white space to go well with the placemats.  It really shows when they are side by side.  It will be fun on its own, but not as part of the set.
So today I obsessed.  Here’s Take 2 on a matching runner (I can’t believe I had enough left from those 8 fat quarters to make take two and I still have decent scraps left):

This is another example of how important contrast is to make the Twister block pop.  My fabric layout seemed to have a lot of contrast when it was just squares side by side, but by the time it was reduced to pinwheels a lot of the contrast was lost.  I see some pinwheels because I’m looking for them, but most just don’t show.  When my husband first looked, he saw scrappy diamonds instead. (Hmm…there’s another idea perking here for things to do with the Twister tool…)
That said, I think Take 2 will go quite well with the placemats. It is also much narrower so I will be able to have it on my rather narrow dining table at the same time as the placemats.   Usually I use a runner alone, and remove it when I set the table with placemats because I can’t fit both.
So here’s the set.  I need backing and batting, then I’ll have to figure out how I want to quilt everything. 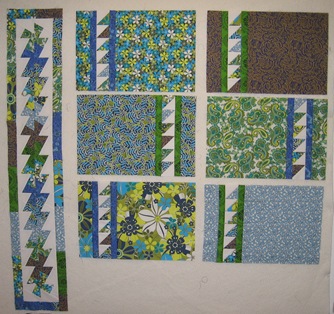 Look what came in the mail

This came in the mail last week from a super generous blogging friend.  Thank you Liri!

They are all fat quarters!  There was a craft book too but my kids absconded with it before I got a picture and I want to get this posted.

Actually, the box this came in was addressed to my daughter.  Liri has kindly been helping her with a social studies project from school and sent her several small treasures wrapped in all this fabric. The lovely note to my daughter did tell her the fabric was for me :)

I will be playing with this soon, but today I’m going to be busy transforming a swing set that the kids don’t fit on anymore and hopefully planting some annuals. The sun is out but the bugs aren’t yet, so I’m off to the garden!
at May 18, 2011 5 comments:

For the past few days I’ve been pondering what to make with my lovely fat-quarter bundles of brights.  I have quilting magazines spread all over my floor, opened at assorted tempting patterns.  The quilt made up of 25 9-inch lone star blocks looked tempting, though I was thinking of a more modest 5-block table runner.  My sticking point is that the block requires inset seams and they intimidate me.

Today I decided to plunge in and try one.  I didn’t cut into my pretty new fabrics though, just in case.  I dipped into the blue scraps and 3 hours later I had this: 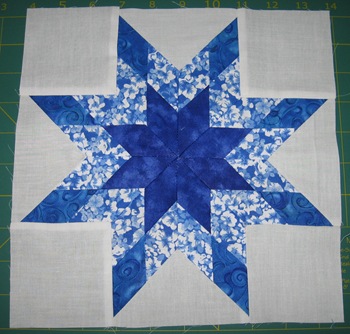 It looks much better than my first and only previous attempt at y-seams 10 years ago.  That attempt was a wrinkly, wont-lie-flat-under-a-steam-roller mess.  More practice should take care of some of the ripples that you can’t see in the picture.

So am I ready to make enough of these to make at least a runner? Hmm.  Eventually. It would qualify as practice. However, at three hours a block (though I’m sure each subsequent block will come together a little faster) it doesn’t fit the bill for the quick satisfaction I’m looking for right now.  Maybe later.

I’m heading back to all the magazines strewn on my floor.  I’ll settle on something soon.  In the meantime, I can at least say that I am no longer scared of set-in seams!
at May 17, 2011 8 comments:

Email ThisBlogThis!Share to TwitterShare to FacebookShare to Pinterest
Labels: y-seams

It’s time for another Blogger’s Quilt Festival.  How did that happen? I was going to show my daughter’s bed quilt, which I didn’t finish in time for the last festival, but when asked her opinion she suggested this quilt instead, since hers has been on my blog before but this one hasn’t. 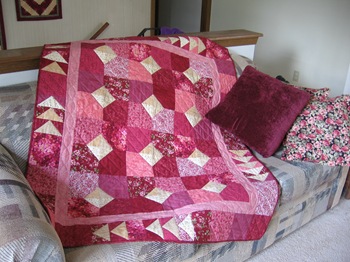 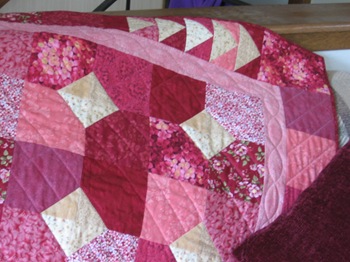 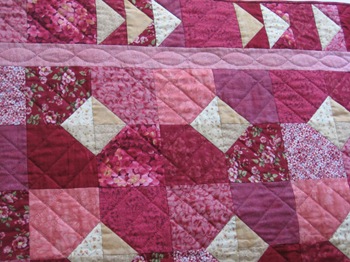 This was my gift to my grandmother when she was ill, since I lived too far away to visit.  She enjoyed it for a year before she passed away, and I’m told she used it daily.  I’m glad I could send her a little piece of me.

While making this quilt I discovered that I could get a quilt hand-quilted in a month, provided it wasn’t too large and nobody minded the complete lack of attention to things like messy bathrooms and unmade beds…

The quilt was machine pieced and hand quilted.  It was inspired by Blueberry Pie, by Mary McCarthy and Pam Buda of Heartspun Quilts, published in the June 2007 issue of APQ.  I made it smaller by using fewer, smaller blocks.
at May 14, 2011 21 comments: 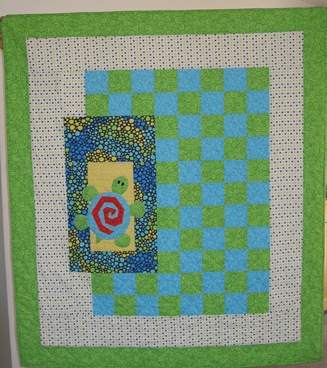 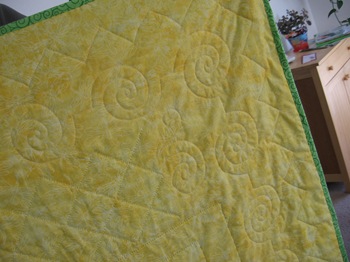 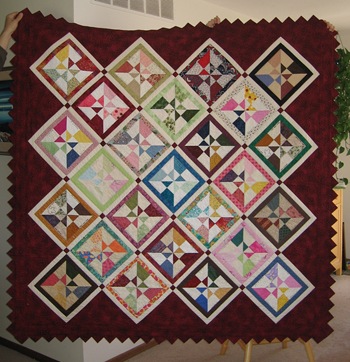 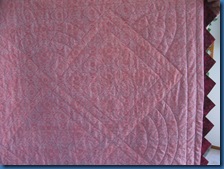 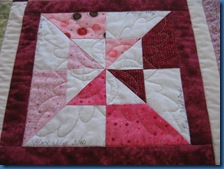 *****
That’s it for quilting for now.  I’m off to the garden to divide a few hostas. I’ve never done that before and I’m a bit worried I’ll kill them instead, but as with the quilting, I’ve got to start somewhere!  Time to go get my jeans muddy!
at May 01, 2011 7 comments: