Showing posts from February, 2016
Show all

What was I thinking? 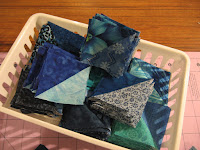 What was I thinking?  The design looks great on paper, but 350, 2" finished HST squares now seems like a bit much!.    I made 310 of them 18 at a time using a "sew on the marked lines and cut apart" triangle paper method, so that went pretty quickly.  It gave me 18 of each color combination, but spread over 310 I figured it would still look scrappy.  I made the other 40 two at a time because I wanted variety in the colors and color combos.

They are all ready but now I need to sew them all together and that's where things are slowing down!  First, random is hard.  To ensure I spread the 18 duplicates of each HST square more or less randomly around the quilt, I divided the 350 into piles of 10 for my 35 blocks.  I thought I would chain sew...but then I lose track of what belongs in which block.  I might just give up on keeping track when I get to the blocks that only have blue units and start chain sewing with abandon.  Right now I'm sewing one block at a time to…
14 comments
Read more

Now I love it! 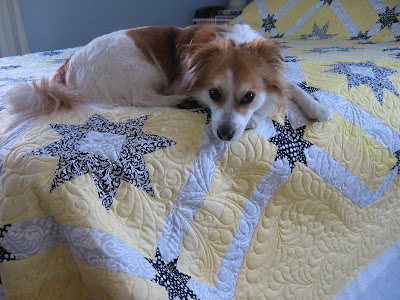 That didn't take long!  I dropped off my yellow quilt with Liz Meimann of A Quilted Memory on Wednesday around noon.  This morning there was an email waiting for me telling me that the quilt was ready!  I almost squealed when I saw it.  I did do a little happy dance.


Look at that quilting!  It would have taken me two years, not two days to acheive that, but this is exactly what this top needed.  I had asked for feathers in the border and setting triangles, treating them as one unit,  and something swirly in the rest.  The design we had settled on didn't work so Liz chose something else she thought matched the effect I was trying to acheive, and she chose perfectly!

You can see I still need to trim it and bind it, but I couldn't wait to share.


Off I go to finish other things, things that have deadlines, so that I can then trim and bind this so I can use it!
20 comments
Read more 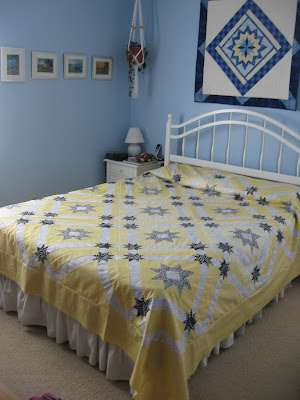 What happens when you use lots of yellow (OK, all yellow) for a quilt background?  You get a very yellow quilt.

That's my latest "Well DUH!" moment.  I put the finished top on the bed and said "Oh my, that's a lot of yellow!" Don't ask me what I thought it would be.  Maybe I thought the gray sashing and black stars would tone it all down.  Perhaps I was more excited about yellow when I started this a year ago.  The pieces have been in a box for most of the last 10 months.  That's plenty of time for my colour mood to change, apparently!


It's hard to see from this picture, but there are actually several different yellows in there to add a little interest.  At least that was the plan.  Now I just see plain old yellow!

It's too big for me to quilt in my tiny corner, so I'm sending it off to a long armer on Wednesday.  I've never sent a quilt out for quilting before, and I'm having a bit of trouble letting go of the control that comes…
16 comments
Read more 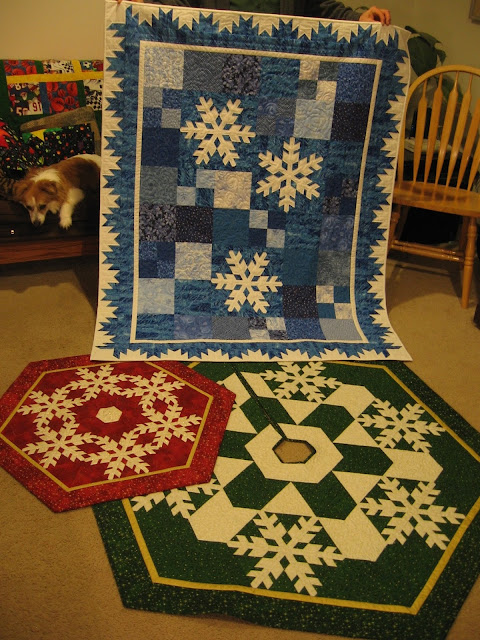 I just put the last stitches in the binding of my snowflake treeskirt, and the pile of projects waiting to be quilted has officially diappeared.  That isn't to say there isn't binding sitting around waiting for a quilt in progress.  Those quilts in progress just aren't ready for binding yet.

So, here's what I put binding on this past month, besides my son's quilt and the Minions I showed last time.


This is a poor picture.  That's what I get for trying to have a photo shoot at 10 pm.  I'll try to take better ones during daylight hours and share again!  I wish I had finished in time to take pictures outside on lovely fresh snow.  After the past couple of days I would be taking pictures in lovely squishy mud!

The treeskirt pattern will be ready by the end of next week (hopefully sooner) and I'd like to have it tested.  There are two sizes for each design.  Let me know if you're interested in making one in the next month or so!
10 comments
Read more 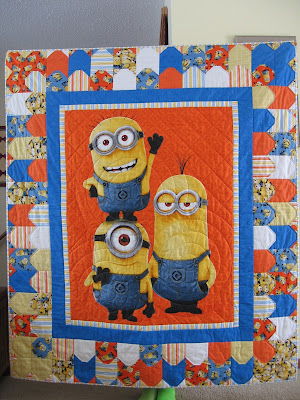 I've crossed off a few things from the quilty "to do" list I posted last time, but I couldn't cross this off because I forgot to include it in the list.  I finished binding the Minions quilt.


I finished the top in early December, but wasn't sure how I wanted to quilt it.  I thought about outlining all the detail in the panel, but honestly, this isn't a quilt I wanted to devote that much work to!  I considered all over swirls, and those almost won, but then I thought of circles.  Concentric circles like targets seemed appropriate for Minions somehow, one target on each Minion.  I filled in the rest of the space in the panel with a large cross hatch, stitched in the ditch around the plain borders, and outline quilted the patches in the pieced border.

Daughter is pleased, and watched a movie last night to curl up on the couch and break it in.  She isn't the only one to stake a claim though!


And here is the quilt in its natural state and habitat.  It is ver…
10 comments
Read more

Only 2 years in the making! 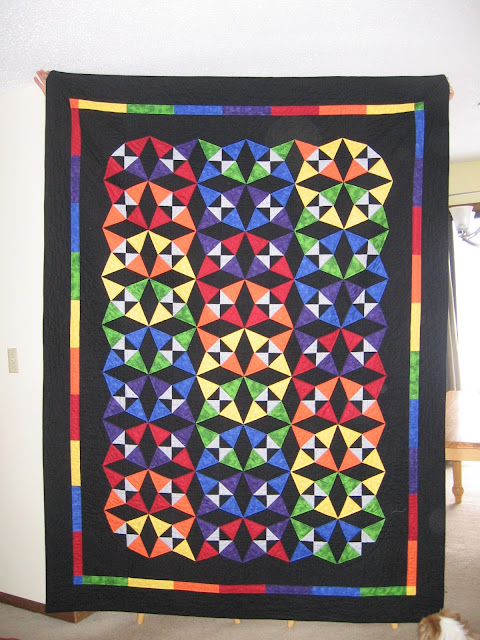 
I sewed the first seam in this one on February 10th, 2014, and I took the last stitch in the binding on February 1st, 2016.  I would have celebrated here earlier, but nobody was available during daylight hours to hold it up for a picture until today.  Hmm, and looking at it now, I think I forgot to turn the flash off and it washed out the colors.

Here it is on the bed.  Note the model, who approved the quilt and assumed the photo shoot included her. Given a choice of anything to lie on, Rosie will settle down on the quilt every time.


Most of the 2 year delay in finishing was due to hand quilting.  First, I'm slow.  Second, summers are too hot for me to want to sit with a quilt bunched in my lap so there's no hand quilting happening for at least 4 months a year.  Third, I had a couple of inconvenient bouts of tendonitis that curtailed the hand work for a while.  Fourth, I sometimes I feel like hand quilting, a…
19 comments
Read more
More posts