As I was sorting through pictures on my phone I realized I never shared this project here on the blog. 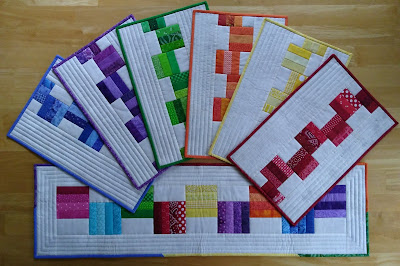 Last spring was grey and gloomy and I needed more colour in my life to tide me over until the garden started blooming. There's plenty of colour in my scrap bins, and I spent several evenings sifting through those, petting the fabric and choosing small scraps, deciding whether I could really bear to use the last little bit of this or that favourite fabric.(You never know if there might be a better project for it right around the corner!) 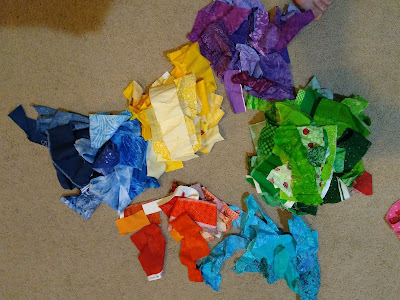 This is not my whole scrap stash, of course!  These were just the ones I thought would play well in my project. Surprisingly, this selection hardly made a dent in the scrap stash.  Scraps reproduce inside those bins.  Someone needs to conduct some research into that phenomenon.

I even found scrap strips for the binding. 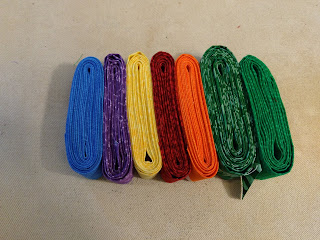 These placemats were a joy to sew.  They were colourful, quick to make, and gave me the satisfaction of making quick progress after working on slower, long term projects. 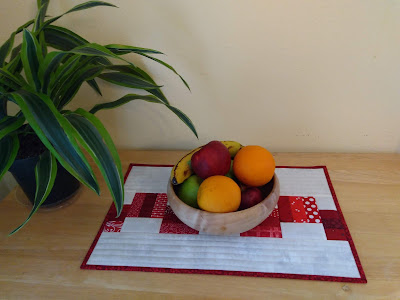 You can see I kept the quilting very simple.  Easy, quick, evenly spaced lines quilted with my walking foot add plenty of texture without distracting from the colorful scraps. 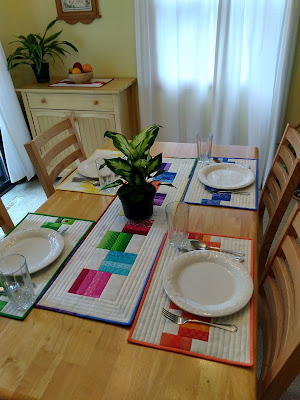 I love them, though the family is afraid of that white background.  No worries.  We just use different placemats when we serve spaghetti and sauce!
at September 25, 2019 13 comments:

I have gorgeous fabrics.

Just look at that blue with little metallic silver highlights!  How could I leave that on the shelf?

You can't tell from the picture, but the dots on this are metallic silver.  Very, very pretty though not my usual choice of fabrics.

I bought them with a particular design in mind.  I designed it in a much softer color palette for a project I can't share yet, and decided to challenge myself to give it a totally different feeling with stronger, darker colors.  It actually looked pretty good in Civil War reproduction blues, and in a particular group of reds.  I rather like the suggestion of plaid in the background.


The catch is that I couldn't find what I had in mind at the quilt shop. I must be the pickiest fabric shopper ever, because with a choice of over 10,000 bolts of fabric at Quilting Connection  I wasn't satisfied.  Sigh. I just find it hard to change course when I have the perfect combo in my head.

However, change course I did!  How about a "guy quilt" in steely greys with just a pop of color in the stars?  That's when those two gorgeous fabrics above jumped on to my cart.  I chose three more greys to play with them, brought them home and promptly began to doubt my choices. There may not be enough value contrast between my first two fabrics for the design to pop.

Last night I stayed up late sewing some test blocks, hoping I was wrong.  While I sewed I had the sinking feeling that I was right.  I put the blocks up on the wall and went to bed mulling over options.  I liked the greys, but the blue wasn't working for the stars.  I went to sleep stumped about what to do about the stars. 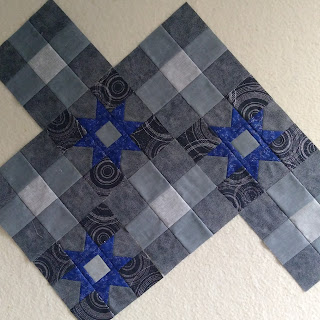 I like my grey plaid background, but the star points fade away.  I still love that blue. I so badly want it to work, but I think it will have to wait for a different quilt.

So what do you think about those stars?  I could use the same fabric as the lightest grey in the background, but would that make the quilt too dull, so very monochromatic?  Or creamy yellow stars?  Maybe I could find a red that would work, but it might be a challenge to find a value that isn't too close to the darker greys, with the same trouble the blue is having.  I thought it was vibrant enough that it would work anyway, but clearly value still counts.

So, it needs simmering.  I'm off to work on something completely different now!

Burst of productivity in orange

I have been invited to be the International Association of Quilters' guest designer for November.  I'll provide instructions for a block for their mystery quilt, as well as a quilt pattern for their members.  I have known about this since last December.  I did have a plan, but just couldn't seem to start on the quilt or the pattern.  It turns out that was because it was the wrong plan.  I just didn't know it until a looming deadline made me admit that I just wan't excited about Plan A. Once I gave that up, Plan B popped into the newly vacated space in my brain and moved along at a steady pace. 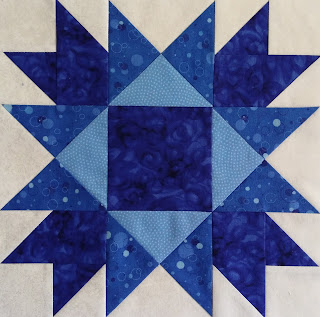 I'm sure this block must exist somewhere.  If anyone knows what it is called, please let me know.  For now I've named mine Variable Starburst.

Plan B morphed a bit along the way.  I planned to work in blues, as in the test block above.  I planned a layout that used 10 of these stars, each with different value placement, as an exercise in playing with value and placement.  That's where the "variable" part came in.  Then I thought to add a layer to "variable" by making a single star a different colour.  I went back to my EQ drawings and made one star orange and promptly decided I currently love orange and had to make every star in the layout orange, except the variable one. 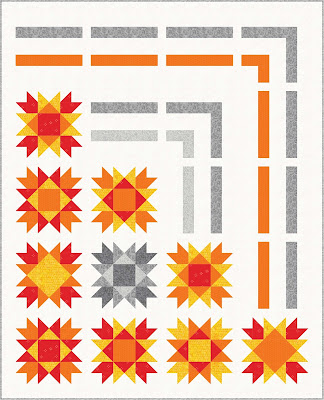 I got as far as doing all the math, figuring out cutting charts and yardage amounts before the test block fell off the design wall and I slapped it back on...on point. 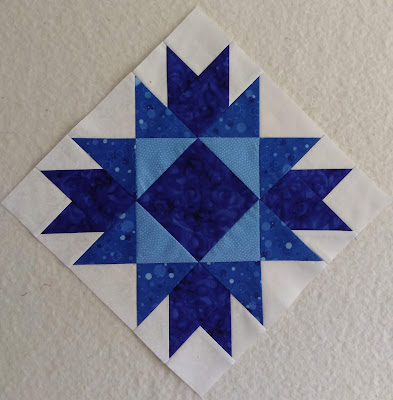 OK, I like the block even more on point.  I fired up EQ again and played with that idea. 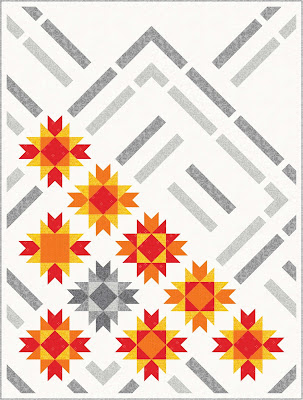 This is kind of fun too, but those pieced setting triangles would be a pain to write up in a pattern. I do like the movement the diagonal elements add, though.  I went to bed undecided and ready to pitch Plan B out the window.

The next morning, in my free half hour before heading to work at the quilt shop, Plan B morphed into Plan C. I really, really like Plan C, so much so that I spent my lunch hour doing the math so I could buy the fabric before heading home. (But you know, revisiting both versions of Plan B right now I think fabric may eventually come out to play with them too.)

I'll keep the full design to myself just a wee bit longer, since I'm very close to being able to show the finished top, but here's a peek a some of it.  I love its clean, crisp lines and all that orange brightness.  Who knew I could like orange this much? 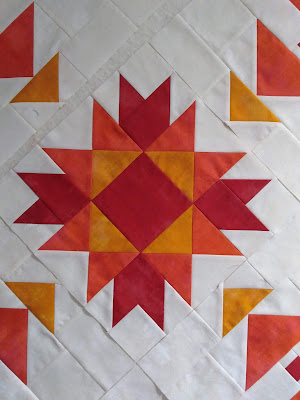