After my attempt at a blue drunkard’s path and snowflake quilt fell flat at the end of March, I planned to give up on that idea and use the drunkard’s path units on their own.  However, readers gave me a lot of positive comments about the original idea’s potential so I packed up all the parts together, just in case I wanted to try again.

The idea kept pulling at me so this week I gave in and played with it again. 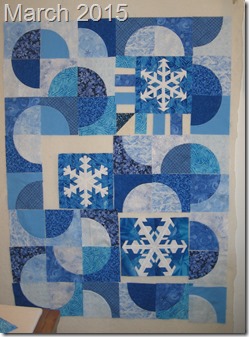 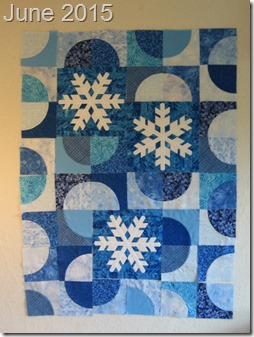 I’m still not happy with the color distribution in the drunkard’s path blocks. Things seem washed out to me.  I think I need more mediums and fewer lights.

However, I think I have the snowflake part sorted out!  The scale was all wrong before.  Also, despite the science geek in me wanting every snowflake to be different, as real snowflakes are, the quilt needs repetition.

I knew the scale was all wrong back in March, but I resisted the idea because my snowflake block patterns were all for 9” blocks.  If you have seen these patterns, you know the paper foundations have drawn seam allowances, shaped to specific angles at the points to help match sections.  That would be lost if I just enlarged the paper foundations on a copier or printer, as the seam allowance would be enlarged too instead of being the standard 1/4”.  I was feeling lazy and didn’t want to figure things out all over again to redraw trimmed seam allowances for a larger block.

This week my high school math came to the rescue.  Do you remember similar triangles from geometry?  Don’t worry, it will work for you even if you don’t remember the details.  The key part is that when I enlarged the foundations, the lengths of the sides all changed by the same proportion, but the angles stayed the same. 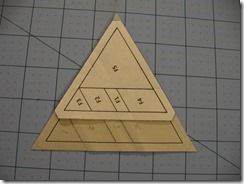 I used my rotary cutting ruler to trim the seam allowances around each paper pieced section to a proper 1/4” and used my paper foundations from the 9” block to trim the points.  Easy peasy!

So, if you have my snowflake block patterns and wish you could make them a different size, you can!  Just photocopy the foundations from the 9” pattern, with scaling set to whatever you need to obtain the size you want.  For example, scaling by 133% will give you foundations for a 12” block.  Scaling by 67% would yield foundations for a 6” block. (A 6” block would be cute, but would have awfully small pieces.  Just saying!)

You can trim the foundations to have the correct seam allowance and shaped points before you start sewing, or you can wait until after you have pieced the sections.  I went ahead and pieced first, then trimmed. 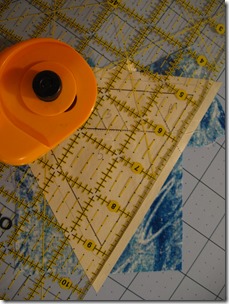 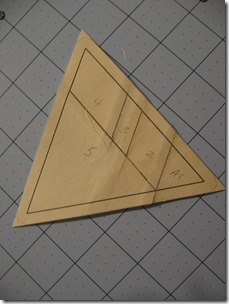 I lined up the 1/4” mark on my ruler along the printed solid line that represents the finished side of the section, then I trimmed away the extra and repeated on each side, leaving a 1/4” seam allowance all around this section. 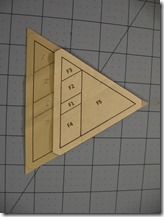 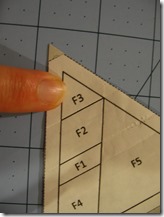 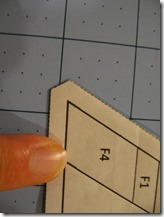 I did this for all the points on all the sections, and then just assembled the snowflake according to pattern instructions. Everything lined up perfectly. 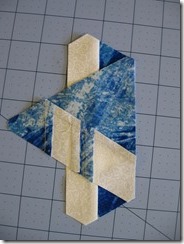 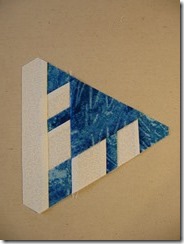 I’m so happy I figured out how to scale this pattern!  Now I can stop asking myself why in the world I designed the original as a 9” block in the first place. Though it took on a life of its own,  I started the snowflake design adventure specifically for this quilt idea and 9” doesn’t figure in it anywhere!  So where did the 9” come from?  OK, I guess I’m not done asking.  The answer just doesn’t matter as much anymore.

Now I need to go pull fabrics from my blue bin to see if I can fine tune the drunkard’s path part of the quilt.

Summer is here and sewing has slowed right down!  I did get these three Scrappy Trip blocks sewn for Diana’s Golden Needle. 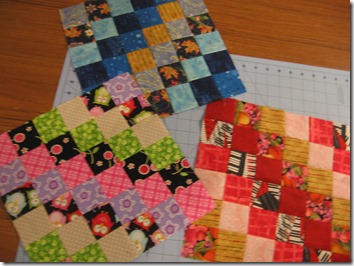 Diana is a Girl Scout working on her Gold Award (think Girl Scout equivalent of the Boy Scout Eagle Award).  She is making quilts, using Bonny Hunter’s free Scrappy Trips pattern, for teens who are aging out of the foster care system and she is raising awareness of foster care and adoption. If you might like to contribute, click on the link above to read more about her project.  My daughter is a Girl Scout (who just earned her Silver Award, whoot whoot!), I was a Girl Guide, my mom was a Girl Guide…I just had to help out with this one!

Besides that, not much has been happening in my sewing room as I have been enjoying summer in the garden instead. 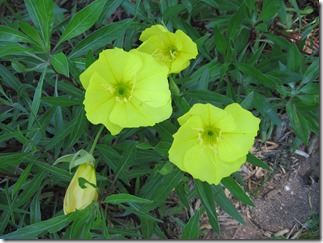 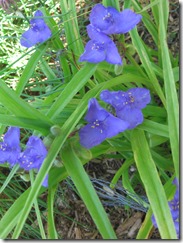 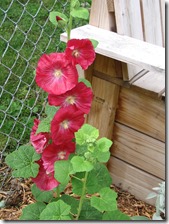 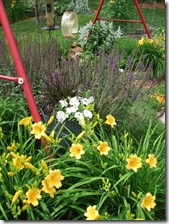 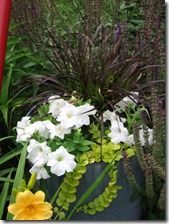 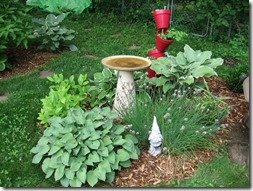 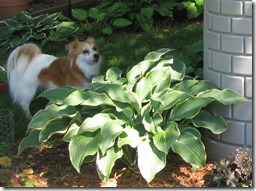 I love that red hollyhock.  It’s new this year.  I hope it will grow as tall and wide as the plant tag claimed, because more of those red blooms would be gorgeous.

You can see the Backyard Security Officer in the last picture.  Rosie does a pretty good job keeping the riffraff out of the yard (that would be rabbits and squirrels).  She leaps over flower beds in a single bound to chase those intruders away.  It’s hilarious to watch.  Just the word “squirrel” sends her racing to the back door.  Don’t worry, the critters get plenty to eat when she’s not out.  I can tell by the empty bird feeders and the munched vegetation.

Right now it’s dark and the mosquitos are out in force, so I’ll just go root through some scrap fabric bins and see what happens in the sewing room.