My husband's  Great-Aunt Ruth was a prolific quilter until her eyesight gave out.  I haven't had the opportunity to get to know her personally, since we have never lived close by, but I do have some of her quilts to admire.  I thought you might appreciate a peek at her work. 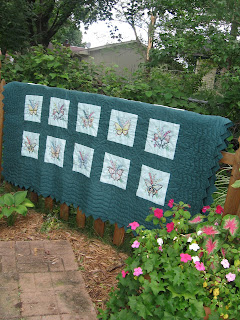 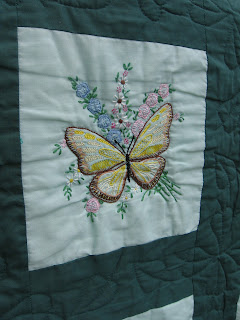 The butterfly quilt was her wedding gift to us.  It is hanquilted, and I check the stiches on it occasionally to see if I'm getting my stitches on my quilts as even as hers.   I'm sure you noticed the prairie points too.  I measured those to give me a place to start when I was auditioning point sizes for my leaf quit.

The quilt below was a gift for my son when he was born.  It arrived complete with the first place ribbon it won at the Stanley Fair.  I love the brown border.  It wouldn't have occurred to me to use such a colour for a baby quilt but it frames "Goldilocks and the Three Bears" perfectly. 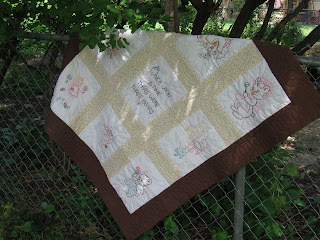 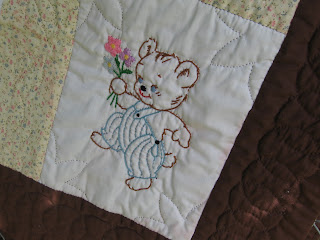 I also have my husbands baby quilt that Aunt Ruth and Aunt Beth worked on together, but I haven't figured out how to photograph it properly.  It is a handquilted whole cloth reversible quilt, pink on one side, blue on the other, with alternating pink and blue prairie points.  I haven't gotten the lighting right to get the quilting to show, but it's a wonderful quilt.

Thank you Aunt Ruth!  I'm off to quilt on my daughter's quilt now, striving for even stitches just like yours! 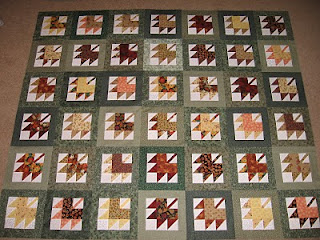 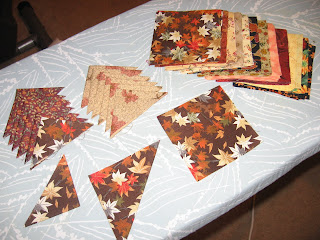 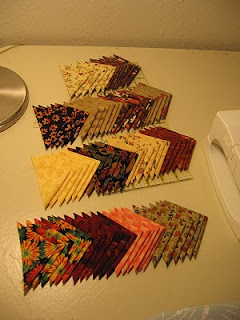 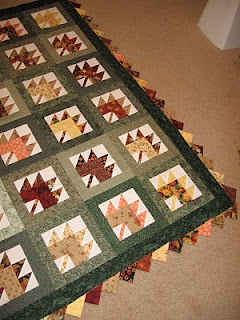 So easy cooking tonight - sandwiches and whatever doesn't create dishes to wash :)  And as long as the power stays on to keep the A/C running to keep the heat at bay (105 F/41 C with the humidity factored in) I can keep quilting. There aren't supposed to be any storms tonight...
at August 11, 2010 9 comments:

The package is in the mail... 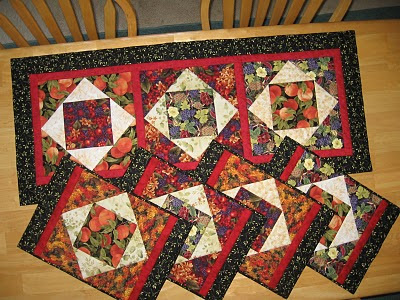 Mom,  your runner and placemats are almost in the mail!  They're in a box and addressed and everything short of being actually in the post office's custody.  Monday, I promise!
at August 07, 2010 10 comments: