Wish I could see this…

Carrie just wrote a post about the American Folk Art Museum’s exhibit “Infinite Variety:Three Centuries of Red and White Quilts”.  She has various links to articles and pictures about the exhibit but you have to go see the slide show in this link.

Seeing 650 red and white quilts in one place is stunning enough, but the way they have displayed them is really cool.  I suppose nobody will get a really close up look, but it’s still a beautiful way to display these quilts. 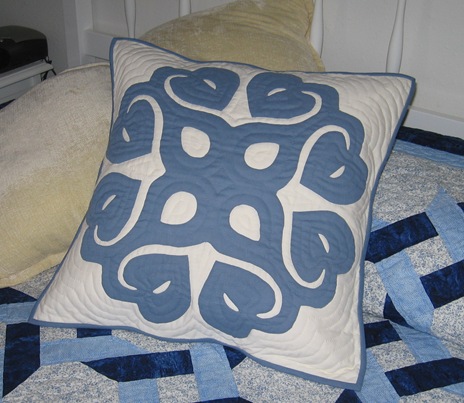 My Hawaiian quilt pillow is finished!  It only took me 15 years and a couple of months :)
It came as a kit, with the applique piece already cut out.  I wasn’t very familiar with sewing at the time so it was slow going when I first attempted it.  Knowing what I know now I realize that the poor quality fabric and the very poor instructions that came with the kit probably didn’t help my progress.  I don’t know that I could have gotten the hand quilting done following those directions if I had gotten to that step 15 years ago, so I’m glad I set it aside till more recently.
Here’s how the UFO list stands now:
1.  Leaf quilt – needs basting and hand quilting
2. Swap quilt – needs basting and machine quilting (currently stumped on what I want to quilt on it)
3. Whimsy pinwheel/windmills – needs borders, basting, quilting (hand or machine?)
4. Designing a Canadiana quilt (maybe this doesn’t count as a UFO since there’s no fabric actually cut yet?)
It feels great to have the list whittled down like this.  It’s about as long as I like it. It gives me one of every activity I like to have available: piecing (Whimsy’s pieced border), machine quilting and hand quilting.  I think  the swap quilt will be my next big focus.  Any thoughts about what to quilt on it?  There is an extra 3 inch border and prairie points all around (all in the same fabric as the setting triangles) since this picture was taken. 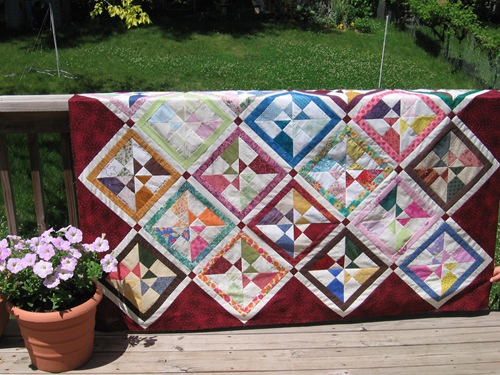 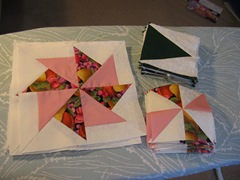 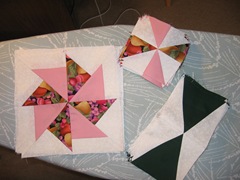 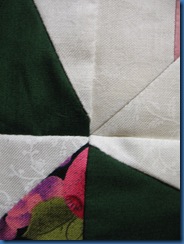 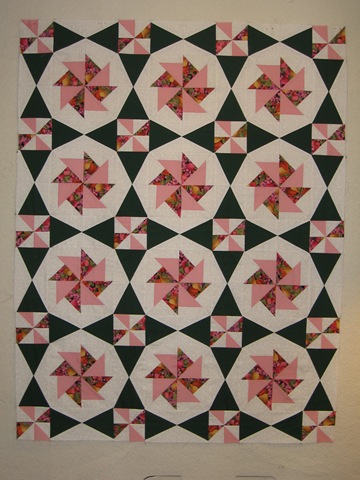 Looking at the whole

I spent the last couple of days finishing up a table runner that I started in January. After feeling like I wasted weeks cutting up scraps into useful units I felt the need to use some just to prove it was a useful exercise! I dipped into my bin of conveniently cut scraps for a variety of blue pieces, followed the pattern “Churnover” that I got for my birthday, and promptly decided I was vastly disappointed in it.  It just wasn’t as vibrant as I expected.  I was uninspired to do anything else with it.
Last week I decided to use it for freemotion practice and to try out a few tips from the machine quilting class I went to a few weeks ago. I found a quilting motif that I thought would work and traced it onto tissue paper. 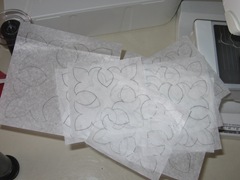 If you try this, be sure to use tissue paper that is made to tear away easily, like the kind used for tracing sewing patterns.
I pinned the tissue paper onto the runner where I wanted the design to go. 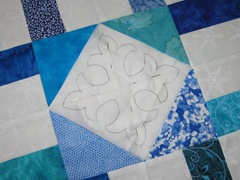 Next I quilted over the lines, right through the paper. 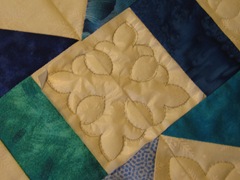 I’m sure you’ve figured out the next step: tearing away the paper. 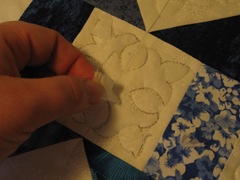 Voila!  A quilted design that didn’t leave behind any telltale markings showing where I didn’t quite quilt on the lines! 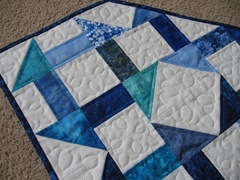 What does this have to do with “looking at the whole”?  This is a piece I seriously considered not finishing because it didn’t soar.  Then I started the quilting and fell in love with it.  Then I finished the quilting and felt I really should have done something different along the edges.  Then I added the binding and fell in love with the whole thing all over again.  So, I’m resolving to never again pass judgment on one of my projects until I can look at the whole finished product.

Thank you for all your encouragement in the machine quilting department.  My Christmas quilt is all quilted and bound and I am very pleased with my first effort. 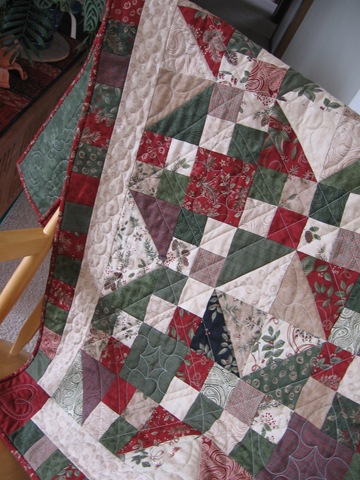 I decided not to push my luck and try feathers in the borders just yet.  I tried some on practice sandwiches but I haven’t quite figured them out yet.  (Any tips on those are welcome!) Instead I did a free form overlapping drops kind of thing in the inner border and decided the narrow pieced outer border didn’t need any quilting.

Looking at it in my living room, I it actually fits in quite nicely with the rest of the decor.  Maybe it won’t be limited to Christmas after all. 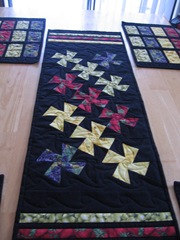 Back in January I did get around to quilting the pinwheel table runner but somehow never posted a picture. 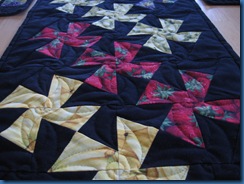 I’m enjoying crossing projects off the UFO list.  It wasn’t very long by most standards but it was really bothering me.  Knowing I had projects sitting unfinished kept me from enjoying new ones.  That’s just a personality quirk, I guess.  Anyhow, here’s where the list stands now:
Almost there! I think once I finish #3 and #4 and get #1 basted I’ll be happy to start something completely new again. Or perhaps I’ll be inspired to try to fix all the problems in #6 after all (and trust me, these aren’t subtle!) .  We’ll see…
at March 04, 2011 4 comments:

No, not unbelievably cute fabric.   Unbelievably cool girls though.  The Flying Monkeys are a team of local junior high age Girl Scouts who competed in this year’s First LEGO League competition.  Half the competition involves LEGO robotics, but the second half, where these girls have really made their mark, is a challenge to come up with a solution to some real life problem.

The Flying Monkeys designed and built a prosthetic device that allows a three year old girl born with no fingers on her right hand to hold a pencil in her right hand for the first time.  As I understand it, the Bob-1 as they call it is a device that is adjustable and can grow with her to some extent.  Not a bad accomplishment for a group of 6th and 7th graders!

Here’s where you come in.  The girls are competing for the First LEGO League Global Innovation Award.  This award comes with a cash prize to be used towards patenting their invention and making it available to others.  They have already had enquiries from people who feel this invention could help them in their daily lives.  If you would like to encourage the girls along, please vote for them at  http://fllinnovationaward.firstlegoleague.org/teams/flying-monkeys/submission/bob-1-hand-device. You can vote every day until March 18, from as many IP addresses as you have access to.