…while I indulge in a different obsession! 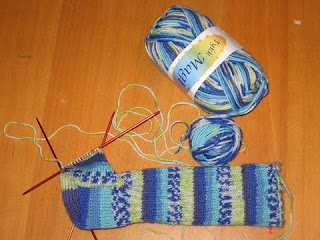 I haven’t knitted in a long time but my daughter overheard me tell a friend about the lovely yarns in a new yarn store that just opened in town.  Guess what she put under the tree for me?
Is this what is called self-patterning yarn?  It looks like I’ve put a great deal of effort into changing colours every half inch or so, but it just knit up that way straight from a single skein.  This could be addictive!  I’m also just tickled that this thing is actually starting to look like a sock.  I’ve never tried socks before.  I found this free pattern (“Wise Hilda’s Basic Ribbed Sock” by Kate Atherley) on Ravelry.com and so far the instructions have seemed straightforward.
Somehow, I remember socks knitting up faster when my grandmothers knit them.  That partial sock is the result of about 10 hours of obsessed knitting!  Also, Wise Hilda claims this pattern is “more interesting…than a plain sock but not so interesting that you have to pay attention”.  Well, ummm, I guess that would be for the more experienced knitters!  I’ve needed to pay plenty of attention, and have had to unravel when I didn’t!
I’ll be back to quilting soon.  Santa’s helper gave me a new book about machine quilting, my current challenge, so once the socks are finished I’ll be making up a tall stack of practice quilt sandwiches.  But right now, that yarn is calling again…
at December 29, 2010 8 comments:

Email ThisBlogThis!Share to TwitterShare to FacebookShare to Pinterest
Labels: knitting

The last little while has been filled with Christmas preparations.  Last week I spent a lot of time in the kitchen baking up all our Christmas favourites. 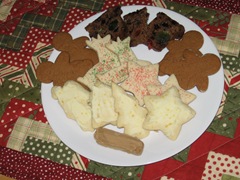 Starting at the top we have fruitcake. Go ahead and make the obligatory fruitcake jokes but the extended family loves this recipe and just this year my son acquired a taste for it too.  The gingerbread cookies need decorating still.  The first batch was mostly given away and now I need to sit the kids down with icing  and candies to embellish this batch.  They’re still tasty though.  In the middle are my hubby’s shortbread cookies.  I love to bake but I can’t make shortbread like he can so I’ve been waiting for the baking mood to strike him.  He finally obliged on Sunday night and these are the best ever.  Beneath the shortbread are frosted orange cookies.  Mom found this recipe in a newspaper back in the early 70’s and I cannot remember a Christmas without these.  Christmas just wouldn’t be the same!  That last little cookie, a maple log,  is a recent addition to the Holiday lineup but a popular one.  The one on this plate is the only one left.

There was also a batch of caramel corn in pretty little packages but I neglected to take a picture before they were given away.  I also didn’t get much of a chance to indulge in it.  I’ll just have to make another batch soon.  Maybe for New Year’s. 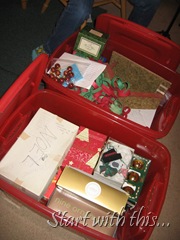 Tree trimming was later than usual this year.   The kids asked to wait until they were out of school for Christmas vacation, so we waited until this past Friday afternoon.  I set up the tree and brought up the bins of decorations before they came home from school, hubby came home early and we spent the rest of the day and early evening 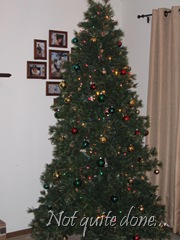 It is becoming a challenge to fit all our ornaments on the tree.  When my husband and I were first married, we had a little 2 foot tall tree and about a dozen ornaments that were carried over from my childhood trees.  It needed work, so every year we made something new to add to the collection.  We graduated to a 6 foot tree so needed to keep adding.  Of course a when the kids came along they started contributing creations.  Soon adding new ornaments became less a necessity and more a tradition.  I’ve recently suggested that we could either stop adding or start removing a few to make way for the new but that was met with resistance, so this is what our now 7-foot tree looks like: 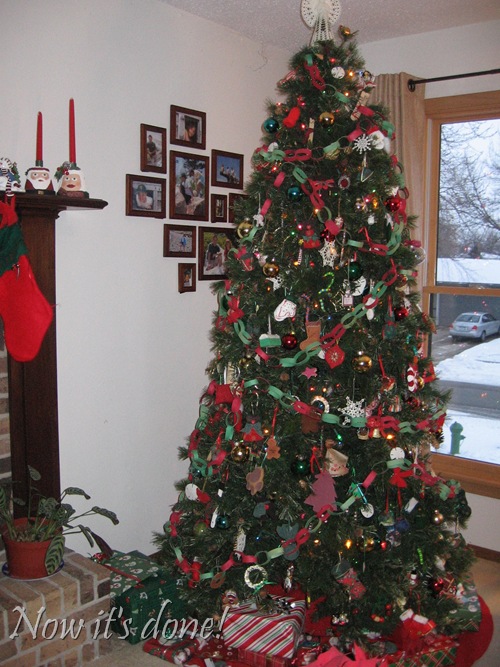 This is not a decorator’s dream by any stretch, but it’s exactly how we like it.  I’d say except for the lights (which are hard to see in this daylight picture) and the coloured balls, 95% of the ornaments are homemade by me or the kids, and/or have a story attached.  In fact, I think even the three oldest boxes of coloured balls have a story attached.  Part of the reason it takes hours to decorate this tree is that stories of the Christmas we made this one or that one get trotted out and that slows down the decorating process.  It’s a fun tradition though.

Here are some of my favourite ornaments.  Some are by me (one of them circa 1976), some by the kids, some by us together.

And here is the only bit of quilting this house has seen in the last couple of weeks. 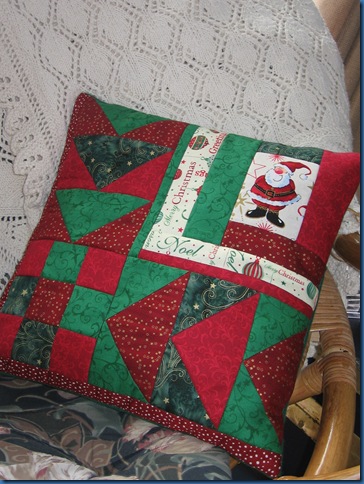 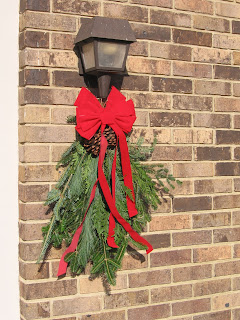 We are of that odd breed that doesn't trim the Christmas tree right after Thanksgiving.  December 1st doesn't turn the switch on either.  Usually the tree goes up the 3rd week of Advent, 2 weekends before Christmas Day, but then it stays up till after January 1st so we can enjoy the Christmas cheer through the kids' "winter holiday".

However, we do let a few Christmassy things sneak in, a few at a time, earlier than the tree.  This past weekend we took advantage of a milder day to deck out the front step railing with greenery and bows without freezing our fingers.  I added a poinsettia to the coffee table.  Our first Christmas card arrived yesterday so the garland we attach the cards to every year will make an appearance shortly. 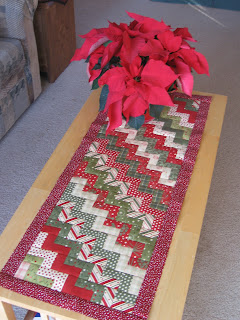 And I've been playing with a Christmas fabric honey bun. It would have come together even more quickly if I'd trimmed units earlier in the process.  I haven't used pre-cuts very often, and I forgot that they aren't exactly sized.  My "1.5 inch wide" honeybun strips were a little wider so when I sewed two strips together with a 1/4 inch seam the resulting strip was wider than the 2.5 inches I needed.  This is when I should have trimmed the strips down to the proper width, but I didn't think of that until after I had subcut the strips into 2.5 inch units, which weren't quite square after all.  Instead of trimming 18 strip units I trimmed 108 individual squares.

I've encountered this kind of frustration with pre-cuts before.  Am I alone in this?  I suppose the advantage of these bundles is that it gives you a little bit of a lot of different fabrics to play with, but I don't think it really cuts down on the cutting chore.

Anyway, it's done now and today I'm going to take a deep breath and try my hand at freemotion quilting again.  Wish me luck!
at December 07, 2010 7 comments:

Since I'm hopelessly unoriginal at naming quilts I'm warming to the idea of having the recipient name their quilt.  It worked for my husband's quilt.  My daughter came up with "Heart Mania" for her quilt.  Here it is, finally! 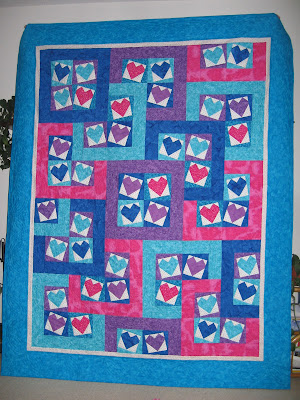 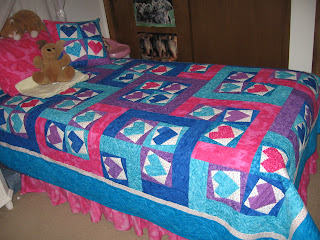 The 6" heart blocks are the "Heartfelt" paper piecing pattern by Cindi Edgerton. The setting, with 3" borders on two sides of each block, is mine. The cable quilting motif in the middle part of the quilt is "Avalon" from Quiltmaker's "Quilting Motifs Volume 1". The motif on the outside border is mine. 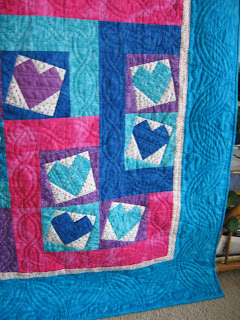 I finished sewing the binding to the back around 1 am on Tuesday.  I should have stopped earlier and finished on Wednesday, but I was so close to being done it was hard to quit.   It was even harder to get up on time and get the kids' lunches packed and everyone off to school on time in the morning!   However I got an "extra squeezy" hug from my daughter after she woke up and found herself tucked under her new quilt, so it was worth it.
On Monday night as I was attaching the binding I was pondering how astounding it was that a 26" square of fabric produced enough bias binding to go around the whole quilt.  I use the bias tube method to make binding.  I have a lovely laminated "cheat sheet" (Quilter's Strip Ticket from Lamb Art Press) with instructions and diagrams on one side and charts listing what size square of fabric I need start with to make various lengths of various widths.  I love that cheat sheet and was rather dismayed when it failed me this time!  Three quarters of the way around the quilt I realized the binding strip would be about 20 inches too short.
It turns out that the chart only works when you put in the right numbers at the beginning...go figure!   I got exactly as many inches of binding out of my 26" square as the chart said I would.  My quilt is 308" around, not the 288" that I looked up in the chart.  Luckily I had enough scrap left over to piece together an extra 20".
Now I'm off to ponder what I will make next.  I can play with other projects guilt-free now that "Heart Mania" is done and delivered.  I'm thinking about a Christmas zigzag table runner for my coffee table...
at December 03, 2010 8 comments: