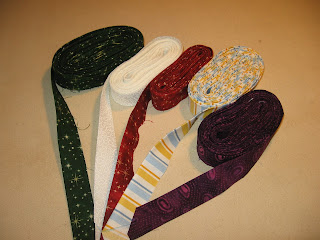 These rolls of binding were my New Year's Eve day sewing, products of my determination to move a few projects closer to finished state before the calendar rolled over to 2016.  After Christmas I looked back at my 2015 sewing and realized I had only two "large" quilt finished for the year.  By large I mean at least a throw size. 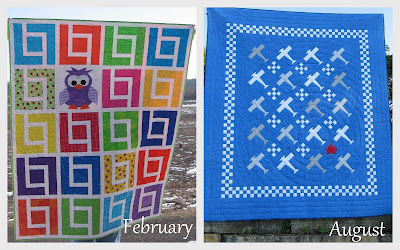 I know I used the sewing machine regularly most of the year, I used plenty of fabric, I created scraps and I emptied thread spools, yet I had only two finished quilts to show. There were a few smaller projects, most of which I made in December: 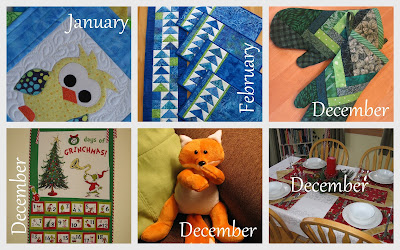 So what did I have to show for the rest of my efforts?  There are four runners that took up most of my May and June sewing time but that I can't share yet (though hopefully soon?).  The rest are partially pieced projects, flimsies and partially quilted pieces that I couldn't decide how to finish.

These three are still in the unquilted pile.

The first two measure about 30" x 40" and will get done at some point but I'm not feeling any urgency about them.  The third was basted on New Year's Day and will get quilted up in the next two or three weeks.  The purple binding is waiting for that one.  And by the way, I think I'm done with Sparkling Trail for a while! 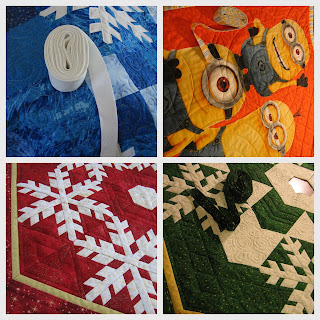 The fall quilt still needs upper and lower black borders, then quilting, of course.  It's a twin size and I know more or less how I want to quilt it, but I'm not sure I want to tackle it at home with the setup I have.  Still thinking on that.  Then I have plans for a variation in a totally different colorway.  The fabric is waiting in a labelled bin...

This queen size one has been coming along in fits and starts since last February, and I think I'm almost ready to pull the top together.  This one is definitely being sent out for quilting!


Last but not least, my son's quilt is in the last stages of hand quilting.  I'm down to the outer border, and I'm making fairly rapid progress.  Of course the progress would be faster if was upstairs quilting right now...


So for the next month or so, I am going to concentrate on these three quilts, and possibly that variation.  I also need to finish writing patterns for the snowflake quilt, the treeskirts, the fall quilt... Let's just say that Canuck Quiter Designs is off to a running start in 2016!


Linking up with
Linky Tuesday at Freemotion by the River
Fabric Tuesday at Quilt Story
at January 04, 2016