They aren’t big finishes, but they are UFO’s from the summer so I’m feeling like I accomplished something.

Here’s a runner made with leftover units (plus a few extra) from the table runner and placemats I made for Mom.  I have now officially used up all these fabrics.
I practiced a bit of freemotion quilting in the white areas, stitching along a tear-away paper template.  Oddly enough, the earliest bits had the tidiest design.  As I kept quilting the stitch length became more regular (yay!) but the design got more wobbly…go figure.  The rest of the runner has straight line quilting because all the FMQ designs I tried looked messy against those bold prints.  I decided that just because I can FMQ a bit, it doesn’t mean it’s the best choice for every piece. 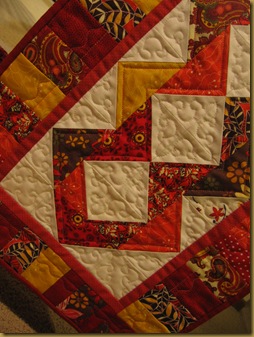 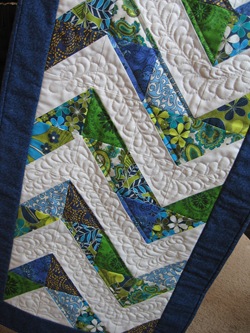 A second set of placemats and runners, which I actually started first, stalled out in June but is now almost done I just have to finish stitching the binding to the back of 3 of the placemats.  The runners – one wide and one skinny – are finished. I couldn’t get a good photo of the whole length, but you get the idea.
The feathers are hooked feathers with no backtracking.  This was my first effort and not at all as regular as I wanted, but overall I like the texture it gives the runner.  I hesitated before trying these feathers on an actual piece instead of a practice sandwich, but I can only do so many practice sandwiches before I get bored.  I had to start “for real” sometime! 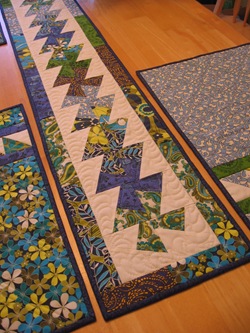 Again, I freemotioned the white bits and stitched straight lines elsewhere.  Of course I only came to that decision after I had covered one placemat in an all-over pattern and stepped back.  I solicited other opinions, let it sit for a few days to see if it would improve with age, then used up a couple of hours of my life unpicking all those stitches.  The triple diagonal lines in a single direction look much tidier.

Next up, tackling Whimsy’s wavy borders.  I will finish that quilt yet!  Somewhere along the way I’ll also finish hand quilting the leaf quilt you see in my banner.  I thought I’d have that done by the end of October, or November at the latest.  Hmm, yes, well, that would have required me to consistently quilt one leaf block most evenings, and I have not been even close to consistent.  Ah well, this quilt is for me, with no deadlines, so it will get done when it gets done.
at December 05, 2011