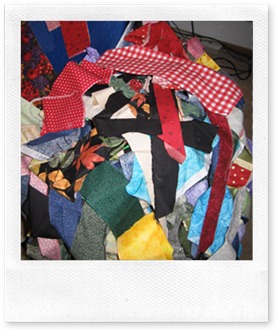 Almost two years ago I resolved to cut my scraps into usable precut pieces, “à la Quiltville”.  I spent days cutting, got discouraged, then decided I would just cut down some of the unruly pile every time I had my rotary cutter out, and would always cut new scraps down right away as part of the cutting for any new quilt.  That way, in a couple of years I’d have a box of tidy scraps to make a scrap quilt.  Fast forward…

Are you laughing really loudly yet?  The mess you see at the left shows you how well I stuck to that plan!

Pulling strips of scrap fabrics to start working on my small lone stars made me realize just how much fabric is sitting, forgotten, in my two scrap bins.  I am inspired and determined (again).  I will tame this pile and not let it get out of hand again. 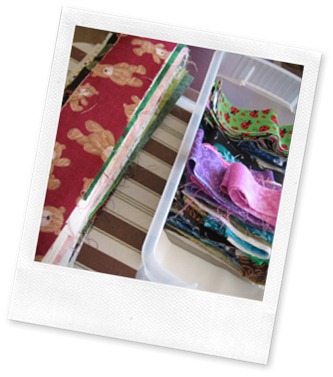 Yesterday I dumped out the wrinkled mass of strips and pressed every one of them.  This week they are getting trimmed down!  The stack of strips is about 4 inches high.  The strips in the box are the ones that I trimmed back in February 2011.

The other bin of scraps is less overwhelming, and I plan to get its contents trimmed down into tidy bits next week.  You can see below how many nice bits I had when I stopped a couple of years ago.  Not much has been used up from this bin.  The bin on the left should fill up as the one on the left empties out 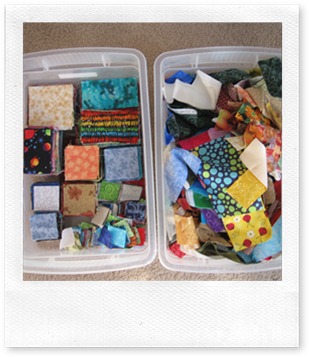 If all goes well (in other words if I don’t give up or get side tracked) I will have no unruly scraps left by the end of January.  At that point I will have two new challenges:  1) remember to trim any new scraps right away rather than starting a new pile of messy ones and 2) actually use the trimmed scraps in a quilt!

I suspect the second challenge will be the greater of the two.  I can stick to the first by repurposing the scrap bins so that I don’t have an empty bin to toss a mess into, but actually making a scrappy quilt with such disparate fabrics will make this matchy-matchy quilter step out of her comfort zone! I keep telling myself that’s a good thing…