It seemed like a good idea, then not so much, then good again, then I ground my teeth.   I think it was worth it. 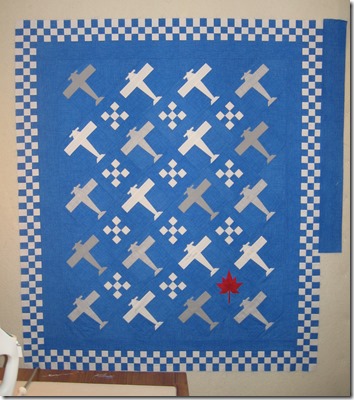 I thought my airplane quilt needed a little something more.  A checkerboard border to echo the nine-patch alternate blocks sounded just right, and with strip piecing it would come together quickly.  In theory.

In practice, strip piecing is still faster than cutting and sewing together individual 1.5 inch squares, but 196 little sub-cut units still take a while to cut and sew together!  About halfway through I didn’t think this was such a good idea anymore! Thankfully the seams nested very nicely so I didn’t have to pin all those.

Once the border strips were pieced I was happy again – until I measured them.  I thought I had a pretty accurate seam allowance, but being off by as little as1/32 of an inch or less on 40+ seams adds up to about an inch.  On the positive side it was too long rather than too short, and I hadn’t yet cut the blue for the inner border I meant to use to float the center, so I was able to adjust that to make the pieced border fit.  I won’t dwell on the blue strip that ended up too short by about 3 inches even though I used the quilt to mark the length.

Now I’m pleased with how the border looks and think it was well worth the effort.  Now to choose a border width for the final blue border….  I think I might just procrastinate and go prepare the backing and binding instead.