I went to a two day retreat this weekend and purposely brought projects that were almost done so I could have the satisfaction of finishing something.  Plus, with nothing else to work on I couldn’t procrastinate on the steps I don’t enjoy, like adding borders.

Project #1, which ate up a little over half of the first day, was in fact not almost done, but it was small and involved cuddle (Minky-like) fabric and was started and successfully finished.  I can’t show you the finished product until after Christmas on the off-chance that a particular someone might stumble onto this post. 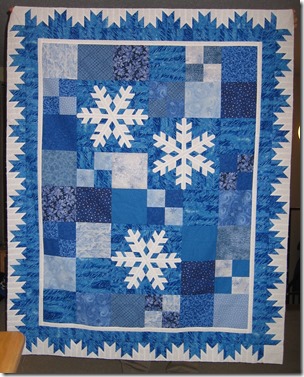 I planned to add a final narrow blue border but decided the white finished it just fine, like icicles hanging off the binding.  I had pretty much decided this before I polled the other ladies at the retreat and they unanimously panned the extra blue as well.  Just quilt and bind in white, they said.  OK, done!  This top is about 48” x 60”.

I think the only glimpse of Project #3 on the blog so far has been a picture of the fabrics. 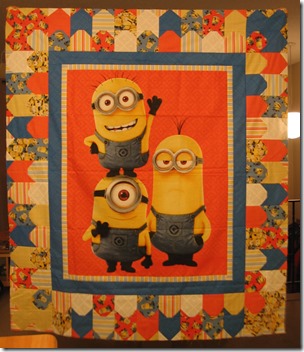 The colors aren’t showing up well here thanks to the poor lighting.  The colors are bright and crisp and really pop.  The pattern is “1 in a Minion” by Paula Stoddard from the Sept./Oct. 2015 issue of Quiltmaker magazine.

I had pieced the outside borders several weeks ago but procrastinated when the time came to cut the panel down to size, so having nothing else left to work on at the retreat was a good thing.  It really wasn’t a big deal once I started!  Some of the ladies thought I had pieced the borders that day…. Should I have let them believe that? 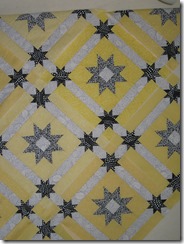 On day 2, I worked exclusively on Project #4, but I have no new pictures.  It’s the yellow/grey/black starry confection I last worked on in May.  I spent a ridiculous amount of time on Saturday trying to preplan how to press seams so they would nest at a later step…and I should have waited till I was home and could make use of the design wall to really see what would meet where.  I had it on paper but I messed up.  Oh well.  The pieced setting triangles are now all pieced, even if the seams might not nest just so, and I have all the pieces cut for the last 4 blocks I need to make this a queen size.

I even found a fat quarter of the light gray fabric I was bit short of.  I bought the fabric months ago, and got that awful sinking feeling when I couldn’t find the bolt anymore.  I had seen it very recently too, which made it frustrating.  If it had been for a different part of the quilt I could have substituted something else, but this one had to match. I’m so glad someone suggested the FQ bins.  If a bolt is almost empty, the shop turns the remaining fabric into fat quarters.  I’ll remember that from now on!

That’s it for now.  I need to get the last two borders on the fall quilt so I can show you that as well, then I need to start quilting some tops.  They are starting to pile up…but the piecing UFO pile is shrinking!