It seems like I have been cutting pieces forever.  Of course I took long breaks, so it seems longer than actual hours spent cutting, but there was still a lot of cutting for my daughter's Chic Country quilt.  First cutting squares and rectangles, then cutting 2 to 3 curves in each with the Quick Curve ruler, adds up to a a lot of cuts!

But finally, seams are being sewn!  Here are the first two blocks sewn together to make sure I'm trimming things correctly for points to match. 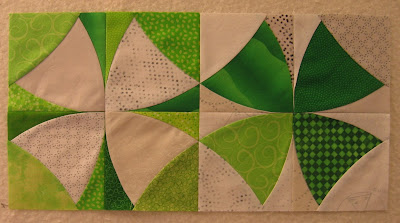 That's a relief!  I'm sure there will be some chopped off and/or offset points in the quilt, but at least I know it's possible!  I did have serious doubts earlier this week. To trim the block, you're supposed to to mark certain points on the ruler and place those on the three points of the unit to position the ruler for trimming the unit correctly.  Actually, the pattern says "align pieced points on or near reference dots".  On or near?  How near?  I was 1/8 off both outside points if I positioned the corner point on the dot, and the 1/8" didn't seem to be in equivalent directions for both points that were off.  1/8"???  Isn't that too much?

I almost cried and quit right then.  I was sure none of the points were going to meet to create the lovely circles in the quilt's design. Why didn't this bother last summer when I made a test block?  Now I had cut up all the "good" fabric and couldn't change patterns and the quilt was going to be a mess! I didn't cry, but I did stomp and scowl. In hindsight, perhaps I shouldn't have been working on this so late at night instead of sleeping.


Thank goodness for the kindness of bloggers!  I searched for images of the quilt and contacted a couple of bloggers who have made successful versions of it.  Cindy of Hyacinth Quilt Designs and Marion of My Quilt Diet both replied with encouraging words and tips and assured me their points were off too but that it all came together OK and to just keep going.  Helen from Sew Kind of Wonderful (makers of the ruler and pattern) also replied to my panicked plea for advice and wrote that my points were off pretty much the same way as hers are when she makes this quilt.  She assured me it would all work out.


Tonight I took a deep breath and wrapped my mind around those points to figure out where to mark the ruler instead of at the stated spots, so I would at least be consistent from unit to unit for the best chance of matching things up.  I made and trimmed enough units to make two blocks, so I could join them and see if my alternate marking and trimming was going to work.

I think I am confident enough to go back to assembly line mode now.  Well, not right  now.  I have, at least temporarily, learned something about staying up too late sewing.
at January 06, 2017