Yes, blocks, plural.  I have more blue scraps than any other colour so they're getting two whole blocks for the July installment of the Rainbow Scrap Challenge. 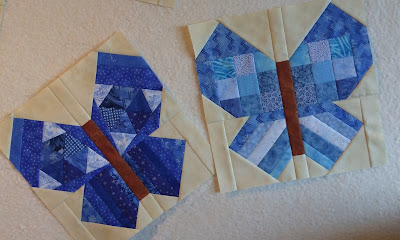 I'm challenging myself to make each butterfly different and to use only my smaller scraps.  Every month is getting a bit more difficult.  I almost gave up on the bright blue one after putting the 60 degree triangles together.  I couldn't figure out how I wanted the set of triangles to sit in the wing. Just as I started packing up the blue scraps, inspiration struck. 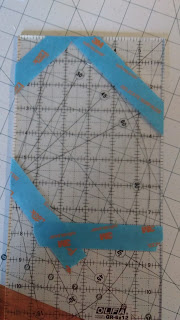 This doesn't look like much but it did the trick.  I outlined the wing shape on my ruler with tape so I could see what the wing would look like once the corner triangles were added.  I added fabric to my triangle unit until it was more than large enough to make a wing base, then used this outline to audition the angle.  This loaded sideways, but you get the idea. 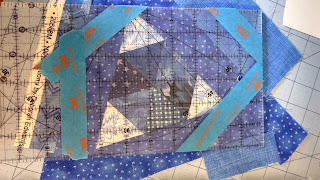 Voilà! One fussy cut wing base! 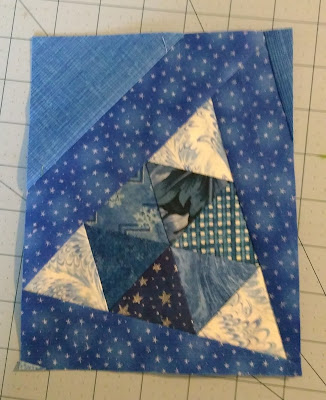 And a complete butterfly.  I think it's my favourite so far. 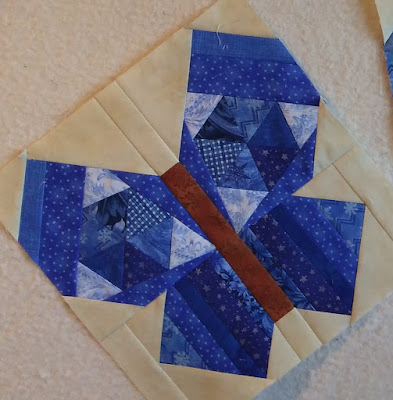 What do you call a group of butterflies? I found references to kaleidoscope, flight, flutter and swarm...  I rather like flutter, so here's my flutter so far. 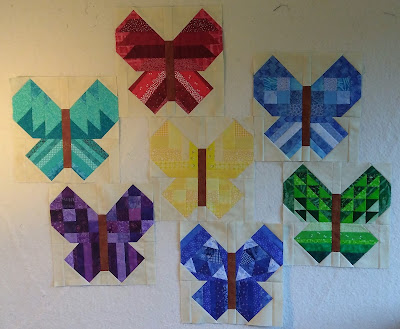 I'm linking up with ScrapHappy Saturday at SoScrappy and checking out dozens of other quilters' RSC sewing!
at July 24, 2017