Fixing mistakes - yes, no or maybe?

I make good use of my seam ripper on a regular basis and don't get too worked up about it. Who hasn't sewn a square to the wrong side of a unit, or sewn a fabric wrong side down?  It just takes a quick minute to fix a little mistake and move on.

Recently I've made a couple of sewing mistakes that were not so quick to fix.  When I shared my "oops" on social media, people told me to just leave the mistake in and move on but I just couldn't do it.  Once I saw it, I couldn't un-see it and it would have bugged me forever.

I still haven't fixed the mistake above.  It's a subtle one, and I didn't notice it until I had added the side borders.  That bottom row of sashing is upside down.  I thought a few choice words and put the project in time-out.  I'm pretty much over my sulk now, and it won't take a huge amount of time to take out the row and flip it around, but a few deadlines have displaced this project on the priority list for now.  Getting the pattern to my tech editor, for example.  Hovering will be released later this year. 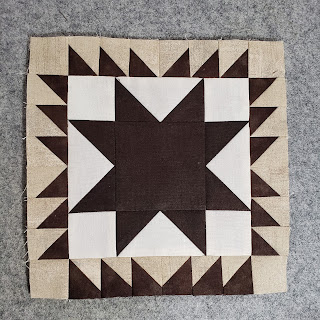 This mistake is a little less subtle! It looks like it should be a quick fix, just remove the last row of the block and flip it around, nothing I'd usually get worked up about.  It would not be the first time I've had to do that.  The snag was that I had experimented with clipping seam allowances to help seams lie flatter at the points.  Those clipped seam allowances were not conducive to disassembling and reassembling things.  It was just easier to remake the block from scratch, including all 24 little HST.  Guess who's not going to be doing much seam clipping in future, just in case I need to rip?

Loads of people told me to call it a design element, make the rest of the blocks the same, and plan a layout to run with it.  That's an interesting idea, but I had already made all the other blocks the "right" way.  "Running with it" would actually have been more work, having to make more blocks to match.

Plus I had a plan, and I don't think the "new" block would have worked in this setting:

That said, when I remade the block, some of my background ended up wrong face up.  I left it that way!

So, I'm curious.  Are you on team "leave it" or team "fix it" or even team "it depends"?  To be clear, I'm not judging, just curious.  I firmly believe in quilting for joy, so whichever approach lets you enjoy your craft, go for it!