When I talked to Mom on the phone this week she commented that she hadn't seen a new post on my blog so she assumed I'd been busy with other things.  That's partly true, but mostly I just haven't had much new to show.  I'm still stitching away on the hearts quilt. Did I mention I'm a slow quilter?  I've made progress though.  I now have 32 of the 48 blocks quilted.  That's two thirds.  Yay!

Because I was getting bored quilting the same thing over and over I went ahead and started working on the outer border adjacent to quilted blocks.  I leafed through a lot of books and thumbed through my idea files for inspiration then took out a compass and paper and came up with a template for this. 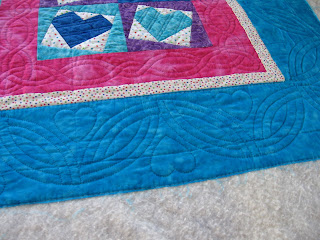 When I took it out of my lap frame the first night I worked on it I had a few misgivings about my choice.  I thought it was perhaps a little too girly sweet for my daughter's taste.  All I could see were heart flowers with big tulip-like leaves, which hadn't jumped out at me when the design was just on paper.

Sure enough, the hearts in the border were just too much for her.  Not that she said so.  She just looked and looked, smiled a wobbly smile and disappeared.  I found her crying in her room.  She finally admitted that she thought it would "take a long time to get used to" but she hadn't wanted to hurt my feelings. 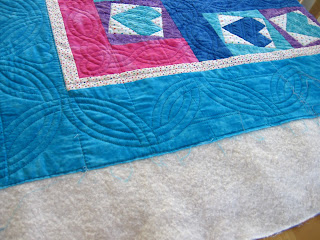 We both still like the curves but I'll leave out the hearts.  I'll try some lines running behind the curves and see how that looks.  It will take a few more than what I have now to really see if it works.  If not I can always - sigh - stitch in the ditch along that inner border to make sure I don't have too big an unquilted space between the last quilting in the center and the dip between curves.  Have I mentioned I really don't enjoy hand quilting in the ditch?

Maybe by the time I finish quilting all the curves the hearts will have grown on my daughter and I can use the hearts to fill that gap after all.

After working on just this for the last few weeks, I'm feeling the need to piece something and use different colours, so I sat down with pencil and paper yesterday to figure out if I had enough of this 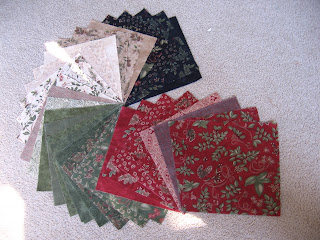 to make a smaller version of this: 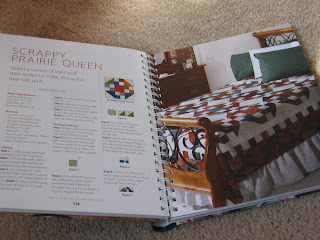 The fabric is a Northwoods Botanicals by Holly Taylor layer cake that I won in Thelma's giveway a while back.  The pattern is Scrappy Prairie Queen from "Creative Scraps: Quilting with Bits and Pieces" by House of White Birches.

Reworked to use 12 12-inch blocks instead of 20 15-inch ones it will be a throw size quilt mostly made with my layer cake.  I'll just need a little bit of light fabric for the inner border and something for an outer border.  This can be my Christmas quilt if I get it made in time.  I know I'll have it pieced but I'm not sure I'll have the quilting done.  Ah well, if not this Christmas, there's still the next one!
at October 09, 2010