Finally a little bit of piecing

Yesterday I finally sat down at the machine to do a bit of piecing.  It was extra-fun because I used an early birthday present my in-laws gave me when they were down at Thanksgiving.  My birthday isn’t until this month but they didn’t insist that I wait till the actual day to use what I picked out.  In the end I didn’t have time to play with it until almost the birthday anyway, but I savored the anticipation.
I used my new Lil’Twister tool to piece this table runner.  To use the tool you start by sewing together 5” squares of fabric and adding a 3“ border all around.  It feels like you have a quilt just about ready to go, complete with borders, but then you use the Lil’Twister template to cut it all up again. It does create a lot of scraps, but I’ll find a use for them.
I had made a small sample to help me get my brain around how the squares translate into pinwheels so I could figure out how to arrange my squares to get the pinwheels in the arrangement I wanted.  The sample block below (which was a little rumpled when I took the picture) was made with four fabrics in a plain four-patch with a black border.  There isn’t any border added to the final block.  The pinwheels just float on whichever fabric borders the squares. 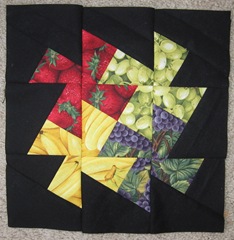 To get the individual pinwheels to float on a background instead of interlocking with each other as in the sample block, I had to piece a checkerboard instead. 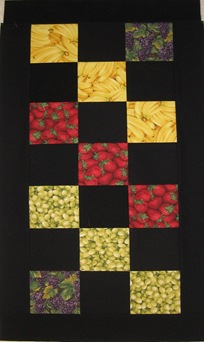 I’m pleased to finally almost have a runner to match the placemats I made with these fruit fabrics a couple of years ago.  The leftover fabric was waiting for just the right pattern.  Now I just have to machine quilt it, which means I need to start practicing.  Yes, piecing this was just an exercise in procrastinating on learning to freemotion quilt!
at January 06, 2011