Progress, not by me 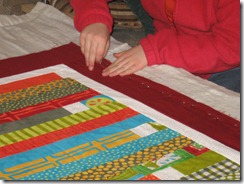 My daughter has been working on the quilt she started last march.  It’s a Jelly Roll 1600 pattern variation. The center was finished in the spring and the borders added by November.  The quilt came out to play again this month.  My daughter did a very good job helping set up the basting frame and loading her quilt, then she pinned most of it herself.  I just helped a little in the end in the interests of regaining access to my sewing corner shelving, which was behind the basting frame. 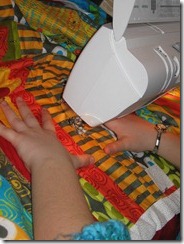 Now she is machine quilting it in straight lines using the walking foot.  Every third line of quilting she is using one of the machine’s pre-programmed stitches and it’s looking pretty cute.  I think all that is left now is to quilt a bit in the borders and she can move on to the binding.  I think she is happy to see the end in sight.  I has taken her longer than she expected (but just about how long I expected!) to get this far. 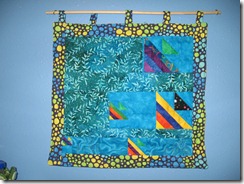 My son finished his wall quilt several months ago, but I just recently got permission to take a picture.  He had a paper piecing pattern to make the fish blocks, but otherwise he did all the planning, fabric selection, measuring and cutting, remembering to add his seam allowances.  Considering how little help he asked for and accepted, I think he did a great job.

There’s no new  sewing to show on my own account.  I’m rather constrained by not being able to cut any decent amount of fabric yet (though the arm does seem to be mending).  I am finally getting around to sorting a dozen years’ worth of family photos though, so there’s a silver lining!  Now the trick will be to keep organizing any new ones so I don’t end up with a pile like this again!