Step away from the piecing…

Why is it that when I have carefully measured everything, and measured each unit at each step along the way to make sure everything is still on track, that is when the final result isn’t the size it should be?  There must be quilting gremlins kicking around here somewhere.

After gnashing my teeth at finding that my carefully paper pieced border (I didn’t have enough fabric to change tack after all) was 3/4” too long on all sides, and checking my math again and again and again, I took in several seams just a smidge until all the smidges ate up the extra length.  I couldn’t just cut off the extra because I needed the pattern to match at the end to turn around the corners.  I then added an outer border to stabilize the bias edges on that pieced border and ta-da! 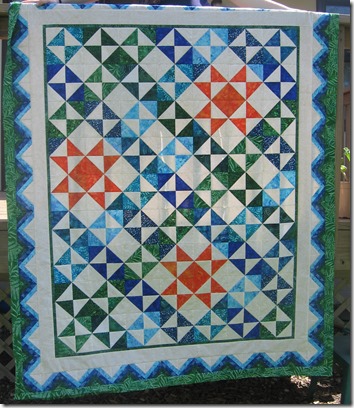 I’m waffling about the width of that last green border.  I may make it about a 1/2” narrower, but this is where it stands now.  I also wonder if I should have used a different scale for the pieced border, but I’m not changing it now!  I have no idea how I want to quilt this so one of the other two flimsies I have on my shelves will push ahead of this one for quilting.

This makes three unquilted flimsies waiting in line, plus the Canada quilt only 1/3 hand quilted.  I know that isn’t very many by some standards but that’s more than I usually have so I need to step away from the piecing, move on to deciding how to quilt the flimsies and start basting. 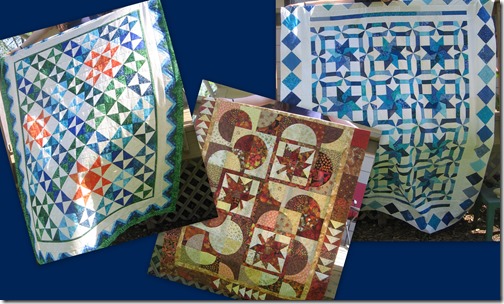