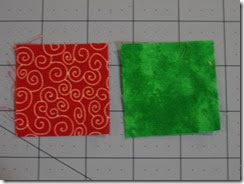 To make the ridiculously tiny 4-patches from my last post you will need two 2” squares. 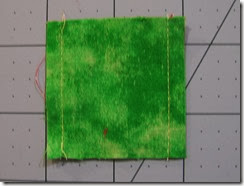 Layer the two squares together, right sides together.  Sew a 1/4” seam on two opposite sides. 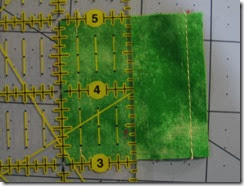 Cut the unit exactly down the middle between the seams.  In this case, that’s 1” from each side. 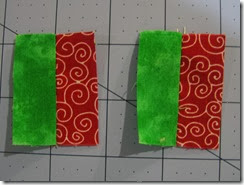 Open and press both units. 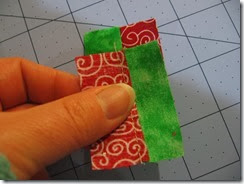 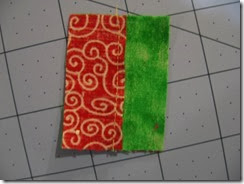 Layer the two units, right sides together, matching opposite colors (in this case red layers over green and vice versa), and nesting the seams. 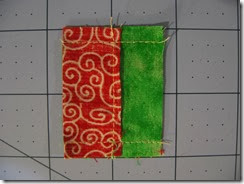 Sew 1/4” seams across the top and bottom, perpendicular to the existing seam. 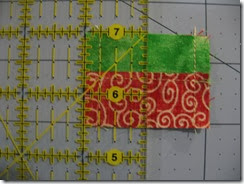 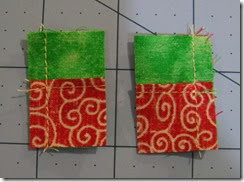 Cut the unit exactly down the middle between these two new seams. 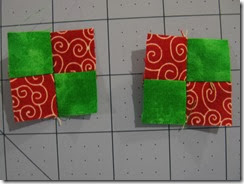 Open up the two units.  You have two 4-patch units.  They should measure 1 1/2” and will finish at 1” when sewn together with something else.  Wouldn’t these make a lovely doll quilt?  They could be set with plain alternate squares in a straight set or on point, or in a zigzag setting…

This technique will work for making larger 4patches as well.  Just start with squares that are 1” larger than the desired finished size of the 4-patch unit.

This tiny stitching is a bit addictive. After playing with these I browsed online for other tiny blocks.  How about tiny flying geese?  I tried these, starting with a 2 3/4” square and a   2 1/4” square to make four  1/2”x1” finished units to add to my 4 patches. 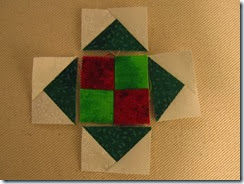 They were pretty easy (and also ridiculously cute!)  so I was encouraged to try tiny triangle squares,  I used this method from Missouri Quilt Company, starting with 2” squares and ending up with 1” unfinished units (I had to trim the units just smidge to get them down to exactly 1”).  That was pretty easy too. 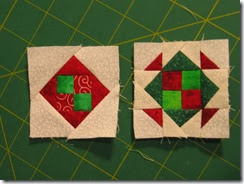 Next I decided to join my little units together into 2 1/2” blocks.  That’s when I stopped having fun.  Well, the block on the left was fine.  I could make a few more of those. I just added a frame around the 4-patch and used a 1 1/2” square and the stitch-and-flip method to add the white corners.  I’ll probably make more of those.

The block on the right used my 4-patch, flying geese and triangle squares. Getting those tiny units where they needed to be was a fussy task!  Any little wobble or mismatched point is accentuated when everything else is little too. The wonkiness is less obvious in the photo than in the actual block.  Ah well, who’s going to be looking at the details when it’s on the Christmas tree?