This is not a race…

For Christmas this year I think I’m going to ask Santa for a sign to put up in my quilting room.  It should say something along the lines of “What’s the rush?”.  I need the reminder sometimes. 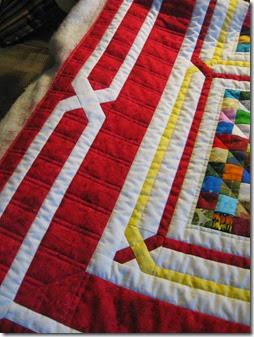 This week I have been machine quilting Quilter’s Scrapbook.  Remember earlier in the week I said I thought it would be done fairly quickly?  I got caught up in that idea of getting it done NOW.  On day two I was getting frustrated because the quilting in the blocks didn’t look like I expected, and quilting the bead board motif in the border is taking so much longer than I wanted (though exactly as long as I should have expected if I had been thinking realistically and rationally!)

Happily I had  a moment of clarity yesterday when I remembered there is no deadline to get this quilt finished.  Any sense of urgency is completely artificial and self-imposed.  I just turned off the machine, walked away and went and accomplished other things that needed doing and gave me satisfaction.

Today I sat back down, unpicked what I didn’t like in the blocks, came up with something else that I like better, and stopped when I had had enough for the day.  Tomorrow I’ll enjoy working a little bit on that bead board border, which is looking exactly as I hoped it would and will take however long it takes to get done. When I’ve had enough for the day I’ll go bake some muffins or tidy up the garden and not feel the least bit guilty. The quilt isn’t going anywhere.  What’s the rush? Quilting isn’t a race, and I’m much happier now that I have rediscovered that little fact.