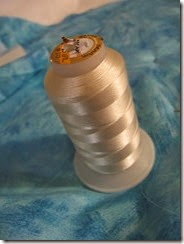 Believe it or not, after 15 months as a finished top Seeing Stars is finally basted and I have a quilting plan.  I even bought new thread. Here’s the 2500 m spool of Invisafil ready to go.

My son offered to unwind two spools one after the other as he runs his next 5 km race to test it out.  I thought that might be considered a tripping hazard, so I’ll just take the manufacturers at their word!