My quilting space is a little cluttered with non-quilty things at the moment.  They aren’t even my non-quilty things.  They will be cleared away by the time school starts next Thursday. After that I can spread out Vintage Sparkle and see about getting the borders sorted out, but in the meantime I needed a project to work on that didn’t need a lot of space. 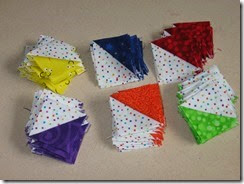 Enter 156 bonus HST from Starlight Wishes (formerly known as Starlight Starbright until I realized there is a QAL by that name going on and sharing a name would just get confusing).  They needed trimming down to a uniform size.  Now I get to play with them to decided what exactly they will become.

I will say that whatever they become will be much smaller than the visions dancing in my head as I trimmed.  156 HSTs should give me a fairly substantial start to a project…except for the inconvenient fact that they are only 1.75” each!  The scale didn’t register in my brain until I consciously did the math.  My 156 HST will only yield about one 15” block, or 2-and-a-bit 10” blocks, or four 7.5” blocks…You get the picture!