I made the first block for this quilt as a sample, just to see what it might look like.  I liked the design and I liked the colours and liked the prints so I decided to work it up into a quilt.  I drew it in EQ first and played around with colours and layouts, so I’d know exactly what I was planning.

When I made another block, I thought it might look too bland to have the whole background the same, so I headed off to the quilt shop for more yellows.  Then I looked at it all again and decided the yellows were awfully bright so I went back to the store for a more subdued yellow to toss into the mix to maybe calm things down. 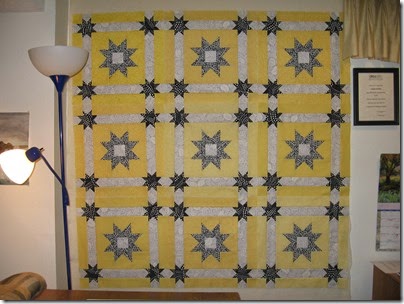 I just finished making the blocks and now that they are all up on the wall I think I should have had more of that calmer yellow.  Or maybe all the same background after all.  And I wish I had reversed the fabric for the small and large stars.  I considered that choice very carefully at the beginning and thought I had gotten it right, but while it was just right for a single block, I think it would be better the other way around in the whole quilt.

I think this needs a border in the same grey as the sashing, but of course that isn’t what I had originally planned so I don’t have enough of that fabric!  There’s another trip to the quilt shop in the near future.  I hope there is still some of that grey left! 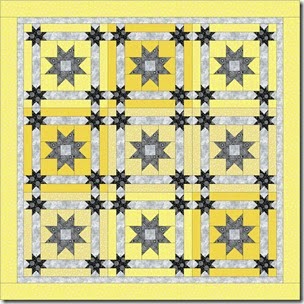 I’m buying extra this time because I may end up setting this on point for a long twin size quilt.  That will require some pieced setting triangles.  Again, this is not what I had planned! 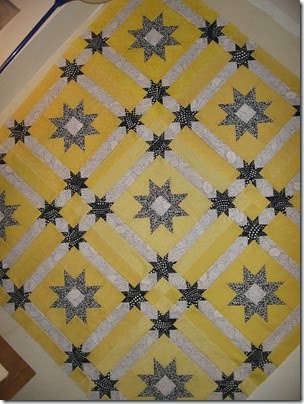 I can see what I want it to look like in my mind’s eye, I just need to get it there in reality.  There might be a version 2 of this quilt down the road to get it right!