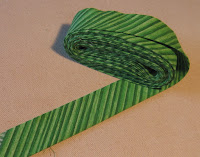 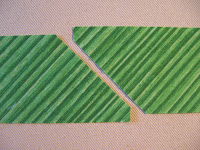 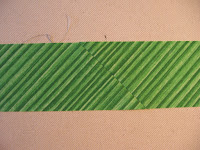 Cutting parallel to the stripe on the ends of each strip 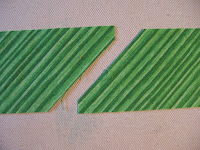 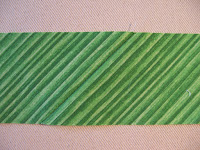 Guess what I preferred? (In case you aren’t sure: I chose option #2.)


Of course I figured this out after sewing strips together willy-nilly, with the angled ends of the strips in whichever orientation they ended up from cutting the bias strips from the rectangle of fabric.  I decided it was worth cutting out the seams that didn’t match up and recutting the strip ends parallel to the stripe.

If you’re wondering why the tips of the angled cuts are cut off, here’s what’s going on with that. I used my corner trimmer to trim the tips to avoid guessing whether my strips were offset correctly to sew to end up with a straight joined strips.


The trimmed tips just help me line everything up just right.

Now that I have the binding made, and the backing prepared, there’s nothing left to do but quilt the runner.  I’ve been putting it off because I’m not entirely sure what to quilt, but there’s a deadline approaching. Tomorrow I’ll just have to get started and hope that inspiration strikes by the time I have finished all the stitching in the ditch!


****************************
Unrelated to quilting:  Can anyone recommend a blog editor that I can use to write my posts offline, then upload them to Blogger?  I used Live Writer, which let me format things the way I wanted, but it has recently stopped getting along with Blogger.  The built-in Blogger editor is driving me batty!  I suppose I'll get used to it, but if you can suggest anything else, I'd be grateful!
at May 29, 2015