Isn't it funny how a small thing can make a huge difference? I've had a love-hate relationship with this little quilt. 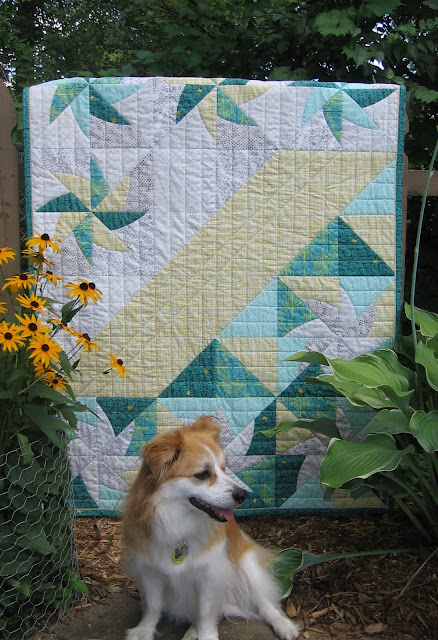 I loved my fabric choices and loved making the blocks.  I hated the way the fabrics played together IN the blocks. (Blocks are from "Chic Sisters" by Sew Kind of Wonderful.) 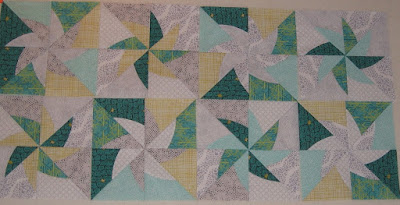 The pinwheels didn't pop as much as I had hoped. The white and grey prints seemed to disappear where they met the light aqua and yellow.  These blocks were supposed to be joined to make a table runner for a shop sample, but I thought it just looked like a busy mess. 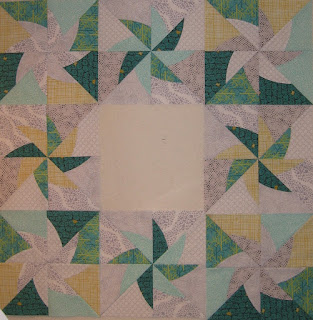 I toyed with a square layout, and tried to figure out what to put in the middle.  Another pinwheel? An applique? An hourglass block?  In the end the blocks sat in a drawer for a few months.

Over the summer I wasn't very inspired to sew.  It wasn't just because summer activities beckoned.  I just couldn't think of anything that I really wanted to work on, and there were no ideas at all percolating in my brain.  At the same time I missed sewing. I finally decided I needed to just push through and finish a few things and see if "clearing the decks" would spark a bit of inspiration.  This project definitely needed to be "cleared"!

My boss at the shop suggested a 3 x 4 block setting with some sort of diagonal element tying the two halves together, so I played around with a few layouts, with different shapes to fill in the extra 4 blocks.  What I came up with was OK, so I sewed it up. Next I struggled to decide what to quilt.  I wanted something simple that wouldn't compete with the pinwheels. 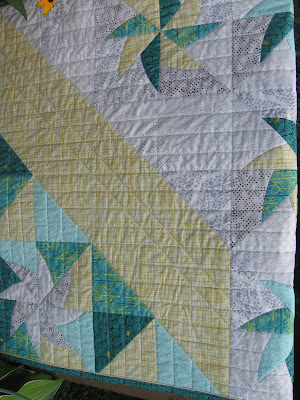 You can guess that I used my trusty walking foot again.  My first thought was to quilt parallel vertical lines top to bottom, but in the end I decided the quilt needed a little something more so I switched to horizontal lines behind the light pinwheels on the teal/yellow background. Then just a wee bit more: how about diagonal lines in the yellow slash?

By this time I was liking the quilt a bit more, but still wasn't excited about it. I had planned to use "faux piped binding" to bind, just to add a little something extra to a borderless quilt.  The tutorial gave me a wider binding than I usually use and it ended up covering up points on the edge of the quilt.  At 10:30 pm, I was frustrated, back to the "hate" part of the relationship, and I took out the seam ripper to take it off, trim the binding to a narrower width and sew it back on.  But, at 10:31 pm I decided ripping could wait until morning and I went to bed.

In the morning, rested and refreshed, here's what I noticed: 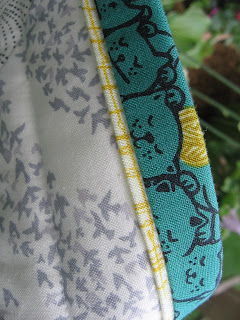 Cute kitty cat faces peeking over the edge of the quilt.  Oh yes!  The binding stayed just as it was!  Those cut off points were really not central to the quilt design anyway.  They were just part of the background.

And there we go.  The kitty cat binding saved the quilt.  It was just the right width and cuteness to pull it all together for me.  I'm back to "love"! 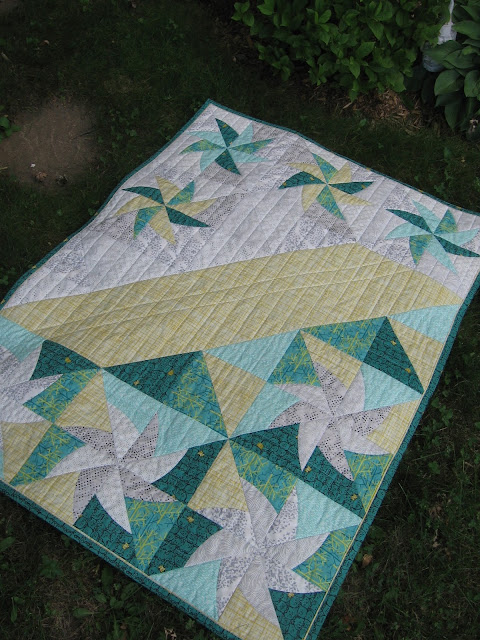