I've been thinking about Echo Point since last fall.  I enjoyed bringing it to life last month, and finally quilting it this week. 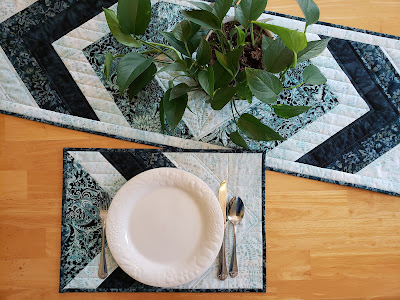 Strip piecing made these really quick to make.  Honestly, deciding in what order to place the fabrics, and deciding how to quilt them took longer than the piecing.
The pattern calls for 5 fabrics, so I pushed myself to find 5 that played well together. These five came home from the quilt shop. 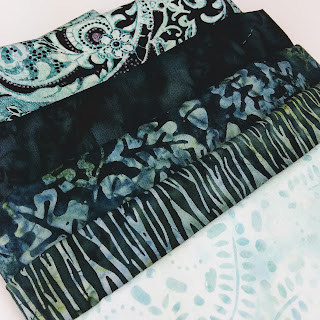 When I started laying them out wasn't sure about that stripey one.  I thought it had a touch too much green.  Happily, I had bought a little extra so I was able to play around with repeating one of the other four fabrics to take the place of the fifth one. 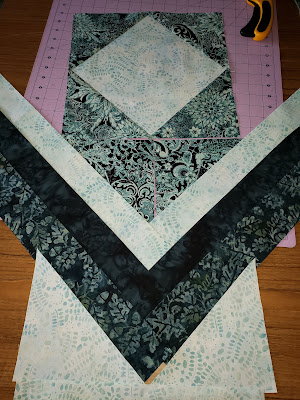 I thought this combination did the trick.  Strip sets followed. 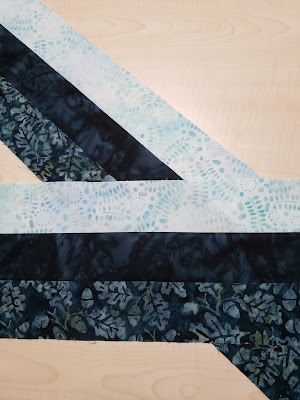 I then got sucked into sewing and didn't take any more pictures until the set was finished. 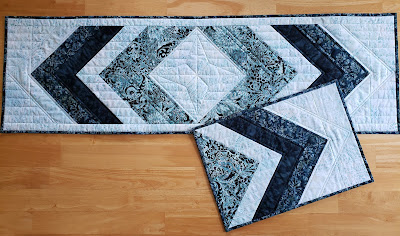 I had planned to use rulers to quilt some circular elements, but none of my ideas quite gelled. In the end I defaulted to straight lines again.  Their crispness pairs perfectly with the clean lines of the pieced design. 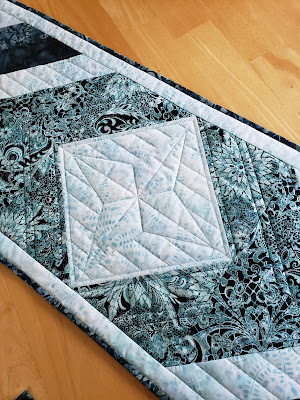 I dressed things up just a little with a star motif in the center of the runner. The quilting on the placemats repeats the quilting on ends of the runner.  Not only does it tie the two together nicely, it seems fitting because the runner is actually two placemats sewn to the sides of a center block.
The pattern is written for six placemats or four placemats and the runner.  It's based on 40" width of fabric, but with 44" wide you could squeeze two more placemats from your strip sets. 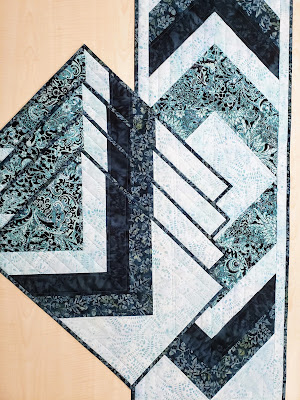 I'm really excited about this design.  I hesitated to write the pattern because there are a few bias edges to deal with, but they're small and really not a big deal in a project this size.  I included tips in the pattern about how to work with those edges, and my generous testers Judy Juhl and Pat Minnick  were very successful.
I will definitely be making more of these.  Version two in Stonehenge Gradations fabric is already pieced and waiting for quilting.  Like I said, the piecing is quick.  I need a little more time for the quilting part :)
If you'd like to make your own, you can get the pattern in my Etsy shop or ask for it at your favourite quilt shop.
Echo Point is pictured on the cover in two colorways of
Banyan Batiks' upcoming Pebbles and Daisies collection
at May 13, 2022