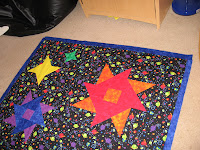 The top is done! I set it aside for a while as I pondered borders. I had originally planned to not have borders at all, but the quilt didn't look finished so I played around a bit. I thought I had settled on a thin blue border, but when I started sewing I decided it still didn't look done. I thought about a black outer border, to sort of go with the background fabric, but that didn't look right. I finally remembered that I was thinking a little outside the box with this quilt, and decided the background could spill out of the box too.

So, after being inspired and discovering exactly what I wanted, I was completely deflated to find the fabric I bought 8 months ago was no longer available (who'd have thought?). I could have sworn I saw some the previous week though. Anyway, as I mentioned in an earlier post, I finally found some online. It arrived and I became obsessed and neglected the housework again but I finished the quilt top. The lighting has washed the colours out a bit, but you get the general idea. 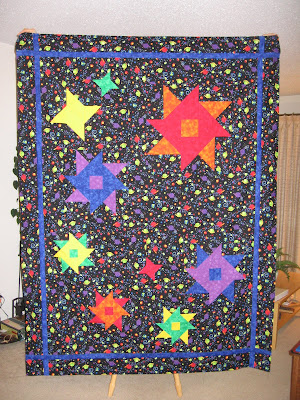 I wavered back and forth about how to quilt this. I had meant to tie it for a quick finish, but then the quilt said "swirls". Of course it changed its mind and claimed the quilting would get lost in all that busy background. I suggested quilting the stars and tying everywhere else and it was happy with that while it waited for borders. Once its borders were attached, the quilt started talking about circles...

I spent the afternoon Friday marking the quilt for quilting with a lot of not-quite-concentric circles in the background overlapping with other sets of circles. I'm not describing it very well, but it looks interesting. The test will now be to see if the quilting shows up at all on the background, and if it looks as interesting quilted.

There will be a delay, however. I hadn't planned borders. Adding borders made the quilt larger. A larger quilt means the batting and backing I had prepared are too small. I really need to start waiting to finish a top before I prepare those. It isn't the first time I've gotten caught. Long story short, I need to piece together scraps to extend my backing, and I need to go purchase more batting.

Oh, and the larger size is just a bit too big to baste in sections on my kitchen table, and I still pin to the carpet when I try to baste on the floor. Off to a machine quilter it goes to get basted, then I'll finally get to start. This is taking much longer than my initial plan, but the quilt is going to be so much more interesting than how it started out in my head that I don't really mind. Besides, spring is bound to get here soon so my hubby won't be needing the quilt right away, right?
at February 28, 2010