The last few months all of my quilting time has been dedicated to moving projects off the UFO list.  It is now down to 2 projects so yesterday I gave myself a reward and played with the fabrics I showed you at the end of my last post. Yes, this means the swap quilt is completely finished! (Insert happy dance here.)  I’m waiting for a less dreary day to take it outside for pictures.
Here’s the new project so far: 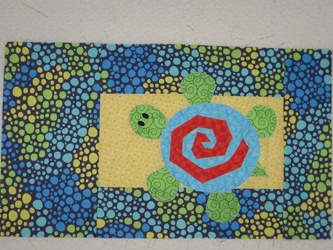 I’m making “Turtle Twirl”  by Blue Meadow Designs from the September/October 2008 issue of Quiltmaker magazine.  I don’t often buy a magazine for any one particular quilt, but I did this time.  The turtle quilt on the cover was just too cute and I’ve been waiting for an excuse to make it.  One of my kids’ favourite teachers is expecting a baby, so here’s my chance!
The pattern used fusible web for the applique and doesn’t actually call for sewing it down, but I wasn’t confident that would survive the use and washing a baby quilt goes through.  I decided to go ahead and do a satin stitch all around.  Can anyone explain to me why my curves got less smooth as I sewed instead of improving with the practice ?!!  It came out OK anyway.  I don’t think Mrs. H. will be fussing about the details.  She’s too sweet for that and besides, she’ll have her mind on more important things by then!
I have the strip units sewn and sub-cut to make a blue and green checkerboard to wrap around three sides of this applique block, and borders to go around everything.  I think this should be ready to baste and quilt by tomorrow.  My daughter wasn’t clear on whether the baby’s due date was early or late May, so I want to get this done sooner than later.
I’m off to sew!
at April 18, 2011