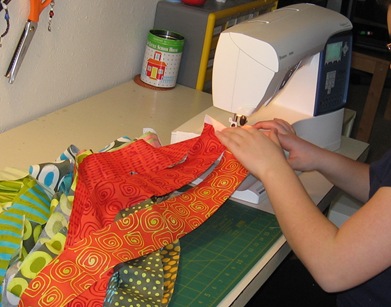 That isn’t me at the sewing machine.  That is my daughter, who avoided the idea of sewing like the plague until a teacher at school started a 5th grade after-school quilting club.  After several sessions there she started eyeing my machine with a gleam in her eye.  I tried not to ask “Really???” too often!

On the weekend we used a gift certificate to buy a jelly roll of her choice.  Today was a day off school and she started working on a Jelly Roll 1600 quilt.  I’ve been itching to get into that fabric since Saturday, but I exercised some self-control and let her open up the roll of strips when she was good and ready to.  I even refrained from helping move things along faster.  I limited myself to giving instructions at each new step of the process, and straightening a very few too-wonky seams. (I went and cleaned bathrooms between steps, and if that doesn’t tell you how determined I was not to hover and interfere, nothing will!)

So far she has sewn a white square of fabric to each strip (that isn’t in the pattern but we thought that would be an easier way to add interest than to have her piece strips on the diagonal just yet), pressed, then sewn all the strips end to end.  She now has one long strip 2.5 inches wide by 50+ yards.  I’m being very good and not touching it while she’s in bed.  I’ll let her do the rest too, probably later this week.  I can wait. Really. I can.  I think.

In the meantime I’ll dabble in these fabrics.  The colours didn’t photograph well.  They are more vibrant than this but you get the idea. 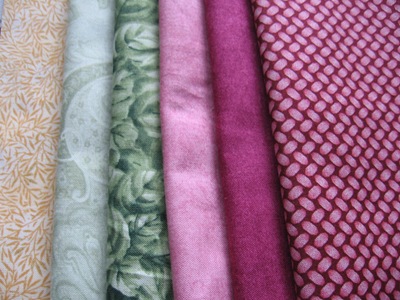