Rudolph has come to visit a little ahead of schedule this year! 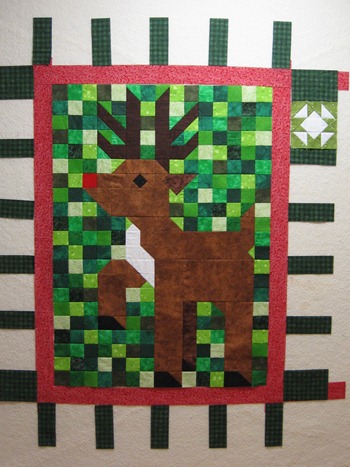 I couldn’t resist a little “just for fun” sewing, and I’m really just a little kid at Christmas.  I have an “all grown up” style of Christmas quilt already but this one, even unfinished, is making the whole family smile and want to put on some Christmas music. Anyone for a rousing rendition of Rudolph the Red-Nosed Reindeer?

This is Jingle Patch from the November/December 2012 issue of Quiltmaker magazine.  I changed the assembly though.  The pattern called for the body to be made up of small squares as well but I really didn’t want to cut 75 brown squares then sew them back together again.  I drew the design onto graph paper and sectioned the quilt in a way that let me sew chunks of brown together instead of small bits.

I am also changing the borders because I didn’t care for the squat little trees in the border from the original pattern.  There was a note that the borders on all the “Patch Pals” patterns are interchangeable, so I looked up the rest of the collection online and decided that the border from the November/December 2011 Patch Pal quilt (Polar Patch) suited me better.  I’ll be making the snowflakes on two different green backgrounds.

Those will be tomorrow’s project.  Right now I need to stop doing “just a little bit more'” and get to bed before I start messing up the piecing!