The “quilt from nothing”?

My hundred-patch quilt top is finished!  The photos aren’t great because there isn’t anyone else home right now to draft as a quilt rack. I tried using the deck railing but the wind kept blowing the quilt to the ground.  Since I lack patience and want to share right now I settled for a patch of floor with so-so lighting but I managed to take pictures. 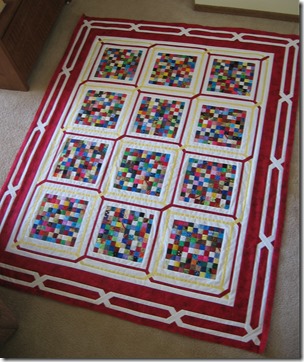 The top measures 59” x 73”, a generous throw size.  The 1200  1” finished scrap squares are fabrics from most if not all of the quilts I have made since I started quilting 13 years ago.  These were a by-product of my mad cutting down of scraps in the past year. I cut scraps into squares and rectangles and strips, but then took the scraps from that and cut smaller ones.  I think I’ll name the quilt “Quilter’s Scrapbook” since it’s a reminder of all those previous projects. 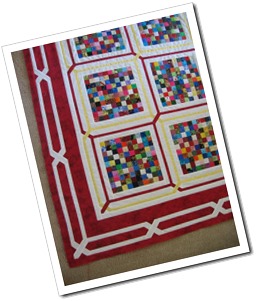 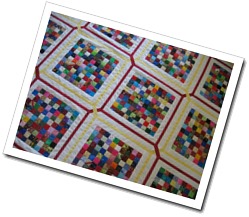 At one point I looked at those 1 1/2” squares and wondered what I was thinking, keeping such small bits.  I almost threw them out but then I saw a 144-patch quilt with wide sashing somewhere online and thought I could do that.  A little later I saw a sampler quilt set with a Garden Maze sashing (again, I don’t know where!) and thought that would dress up the scrap quilt a bit.  I played around with different widths and kept sewing together little squares and felt quite smug about making a quilt from ”nothing”.  By the time I had 12 blocks assembled I had decided to dress up the border too.

Now that it is together, I can no longer feel quite as smug about the “quilt from nothing”.  I may have started out to make a quilt with found bits, but I definitely needed some new yardage for all the sashing and borders!