I had it all figured out.  I was absolutely certain how Vintage Sparkle should come together. Last Friday I finished assembling the center and thought the borders would be added by the end of the weekend.  The top was almost done!

At that point I started wavering about my plan for the borders.  I have since come up with many competing plans.  That has proved rather paralyzing.  What If I start on plan B but then decide plan A was the better option after all?  Or maybe plan C?  And if I had thought of plan B in the first place I would have constructed the edges of the quilt differently to make plan B easier and reduce clunky seams.  Maybe I should unpick what I’ve done to allow for that?  But do I have enough fabric to allow for that alternate construction?

Today I draped the quilt top over my bed and mocked up 3 options on a bit of the edge. 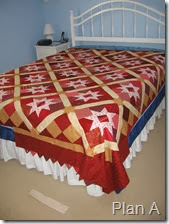 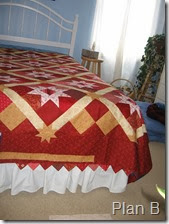 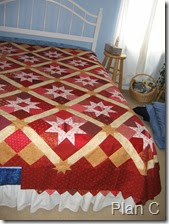 The star that bites into the border in B and C repeats the cornerstone stars from the rest of the quilt. I like that extra element, but A is certainly simpler at this point.  If I choose B or C, I’ll then have to decide how to accomplish that as an afterthought.  I know exactly how I would do it if I had planned it from the start!  I suppose I could unsew the rows and sashing and proceed that way but…I hated pinning and sewing those long seams and I suspect I wouldn’t enjoy unpicking and then doing them over!

Okay, I’m done with the whining.  Maybe I’ll just let this one sit awhile while I go work on the tax return.  Not that that is much more fun!

Linking up with Linky Tuesday at Freemotion by the River