Thanks for all the kind encouragement about what I claimed was a lumpy, wrinkled, puffy mess in my last post.  I pushed through and finished the quilt, binding and all, then went through another mood swing:  I love this quilt!  You may hear my daughter say “I told you so”! 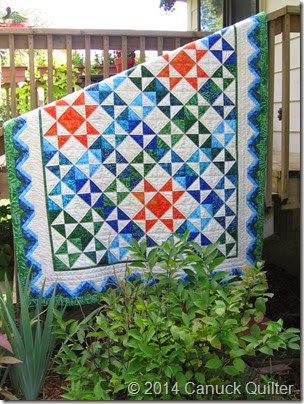 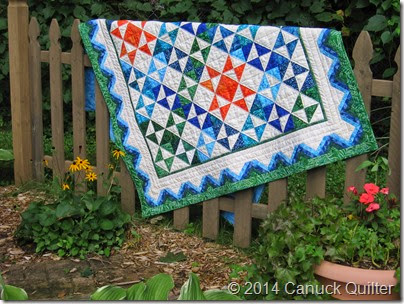 It took me about a year to decide how to quilt this quilt.  I came up with three or four sketches of elaborate and less elaborate custom quilting for the center and the borders.  This was going to be the quilt where I practiced FMQ.  With well defined small areas I figured I wouldn’t have to move too much quilt for each design and I might be able to pull it off.

When I finally pulled the flimsy out of its storage box, those plans went out the window.  The colours and the design jumped out at me and I fell in love with the combination all over again.  I love that the orange stars pop out but that if look again, I see stars in the blues and greens.  Look again and I see white stars.  Or a lattice.  I just love this about the design and I decided that’s what I want the focus to be.  Any of the custom quilting plans I came up with focused attention on a particular part and interfered with the eye finding a different way to see the quit. 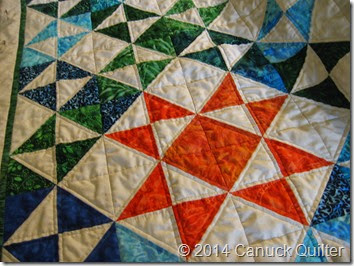 I wanted the colored part of the border to look like a framing mat set on top of the plain cream part, so I quilted parallel lines like a frame around the center, with one line running between but not over the points, as though it runs beneath the points.  It looks better in person than in the poorly lit photo below.  I quilted I the ditch in the zigzag border. 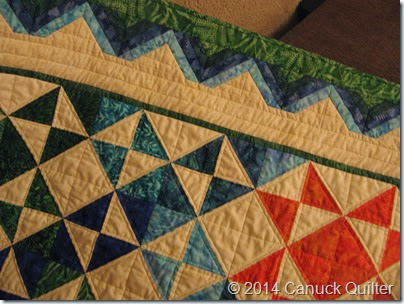 As you can see, it has been kid-tested. 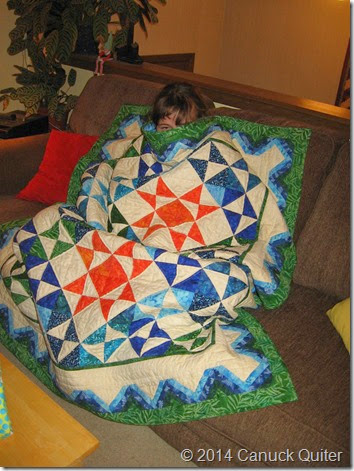 It is now officially ready to curl up in next to the fireplace on cooler nights. 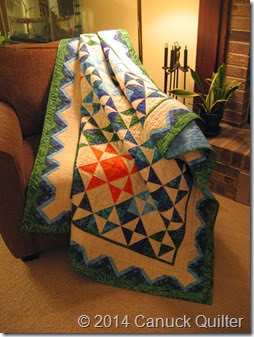 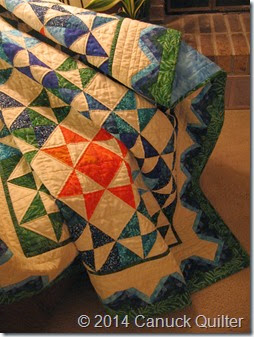 All it needs is a name.  I called it Seeing Stars for the last year, but after googling that name I discovered there are a lot of quilts, and a quilt-along, by that name.  I’ll have to dig a little deeper!  I do have a couple of thoughts.  I’ll let you know what I choose to rename it when I figure it out.