I was supposed to be figuring out how to post patterns for sale on payhip.com (because they, unlike Craftsy, will handle EU digital VAT collection for me on sales to the European Union starting January 1st).  Oops.  I got sidetracked.

Isn’t he just too cute? 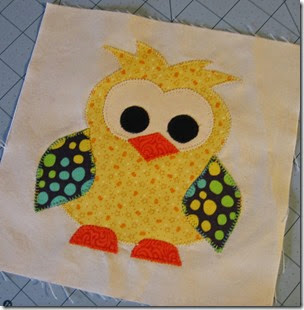 The design is from Five Sprouts Stitching and was free in their Craftsy shop when I went browsing on the weekend. I feel almost guilty getting this cute design for free.

If you have followed my blog for a while, you’ll know that this kind of sewing is not my usual fare.  To be honest, after one not so successful attempt I’ve been too chicken to try machine applique again.  Just how do you get around the points and curves neatly? I thought it would take too much time to learn, and there are too few hours for all the things that are on the “to do” list!  Clearly, though, this was higher on the list than the business stuff, which is why I’ll never be a millionaire!

After I commented on yet another of 2strings’ lovely applique projects, and said again how I should really put learning to machine applique on that “to do” list, she pointed me to two tutorials on her blog.  Her tutorial on how to get around the points and curves with machine blanket stitch is wonderful.  It’s very clear and takes all the mystery out of it.  That’s not to say that I didn’t goof a few times, but that was due to me losing track of which part of the stitch the machine was working on.  The tutorial told me to keep track!

I have a half-formed project idea for this little owl.  Some borders and prairie points and a pillow back…  It could work.

OK, back to business stuff.  If all goes well and I don’t get sidetracked too often there will be new links on my pattern page by the end of the week.

Email ThisBlogThis!Share to TwitterShare to FacebookShare to Pinterest
Labels: applique