I didn't have as much time to sew this week as I would have liked, but I did start ticking things off the list from my last post.  I didn't start in order!

First up is my orange butterfly for September for the RSC Challenge.  Find the tutorial for the basic shape here.)


I struggled with this one.  This is not what the wings looked like initially.  I spent way too long trying to make something else work.  I should have taken a picture of that too, but I was too focused on getting this done to remember pictures.  Anyhow, arriving at this simpler version required careful picking and reconstructing because I didn't want to waste the  background fabric that I had already trimmed for the failed version.  Anyway, it's done.  I think I may make a pink one next month, and call the nine butterflies enough.  I spent some time this week playing with new layouts using just 9 instead of the anticipated 12 blocks. I may throw in a few Spring Blooms to fill in some blanks.  We'll see.

Here are all the butterflies so far. 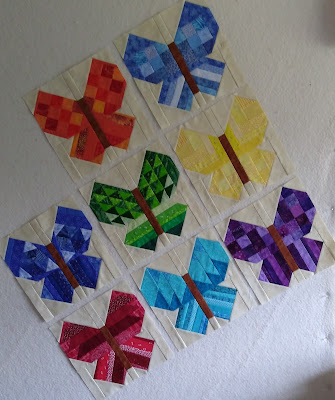 Next, I finished the binding on the Samoyed baby quilt.  Hubby delivered it this week and says it was well received.  Good, because they almost didn't get it. I kind of wanted to keep this one! 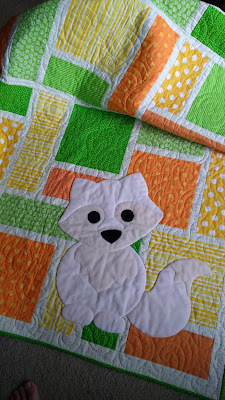 I even like the back.  I needed just 10 inches more than the width of fabric for the backing but I really didn't want a lot of extra of this fabric in my stash.  Enter the scraps from the top! 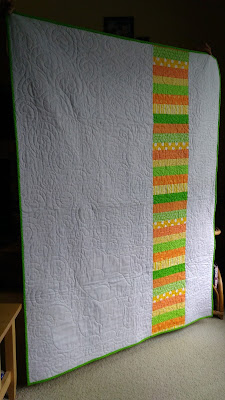 Then, instead of finishing something, as in quilting one of the four unquilted tops on the list, I started something new, but it was on the list so it's OK, right? 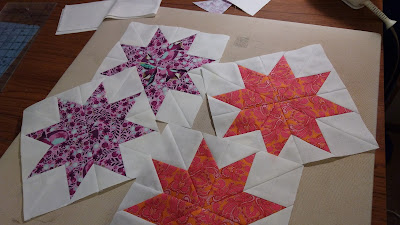 These Lemoyne Star blocks came together quickly using the Rapid Fire Lemoyne Star ruler from Studio180 Designs.  I spent a long time not wanting to spend money on rulers if it was at all possible to make the block without the specialty ruler.  I caved on this one.  I can and have made it without the ruler.  This just made it so much faster and the points are all just where they should be.

I have made a few more, and some alternate blocks as well.  I can share the finished top soon.  If I get off the computer now, I can probably have all the blocks together into a top by bedtime.  But first, supper!  I have to be fueled up for sewing.


Linking up with
ScrapHappy Saturday at SoScrappy
at September 10, 2017