Sandra at mmmquilts! is hosting Throwback Thursday the first Thursday of every month.  I missed last month, but here's my contribution for May. 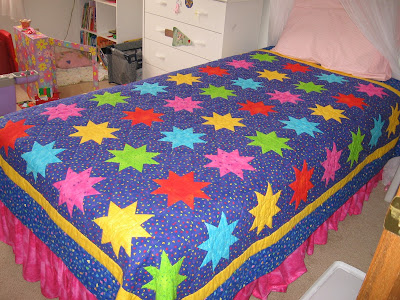 I think the pattern was called Star Soup, though I can't remember who it was by because, ahem, I didn't attach a label.  Maybe this will be a lesson to me a dozen years later: remember the label! This was my third completed quilt, finished in Sept. 2006. (I know the date because the photo was dated.) It only took me a couple of years to make.  Piecing it went fairly quickly but the hand quilting slowed down the finish.  This was in my "one finished quilt every two to three years" period. 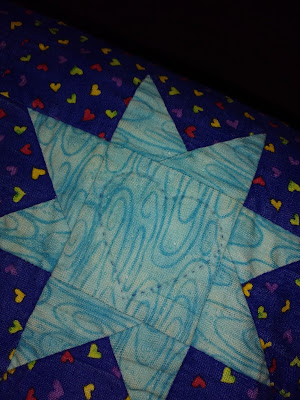 I quilted a diagonal grid lined up with the star points, stitched in the ditch around each star, and quilted a little heart in most of the stars.  The rest of the stars have letters to spell out my daughter's name. 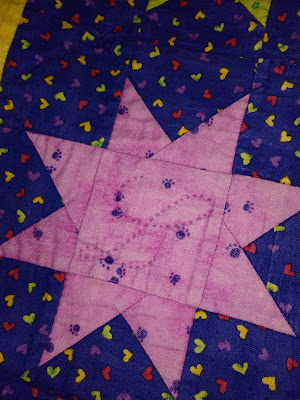 I used a painting stencil to trace the letters.  I did not and do not free-hand that well!

I bought all the star fabrics and the background at Poppin's Parlour in Pentiction, British Columbia but by the time I had assembled the top and discovered I didn't have enough background fabric to use for the border we had moved to Iowa.  Being short of fabric was entirely my fault, by the way, not the shop's.  It turns out that if you make a quilt larger than the pattern plans for, you'll need more fabric.  Who knew ?  :)

Anyhow, I couldn't find more of the same fabric, but another blue with slightly larger hearts scattered all over fit the theme so I went with that. 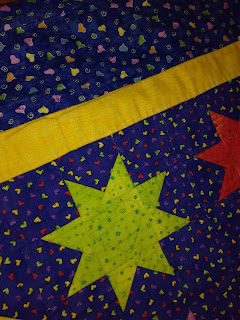 This quilt has been well loved and used. Though it was replaced as Laura's main bed quilt several years ago, it still gets pulled out now and then for extra warmth.  I curled up under it on the couch recently and decided I need to make another flannel quilt.  It is so soft and cuddly!  I'll get right on that...or maybe just add to the list?  That list is getting very long...