This summer these pretty strips showed up at the local quilt shop. 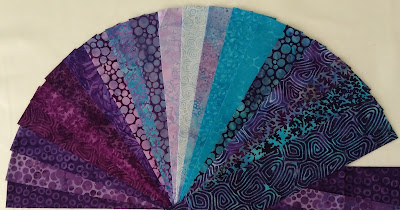 These are Crystal sea from Island Batik.  The colors had to come home with me, even though I had no pattern in mind.  That's a rare occurrence.  Usually I can drool over pretty fabric but I don't bring it home unless I have a plan.   That keeps my stash from overflowing its shelves and it keeps my budget balanced (more or less).

I had deadlines to meet and gardening to do so the strip pack sat on the shelf looking pretty for a month or two until one evening, when I couldn't sleep, I fired up EQ to start playing with ideas. By the time I started feeling drowsy, I had the start of an idea sketched out, but it didn't gel until my head hit the pillow.  I jumped back out of bed, found pen and paper and made a note, just in case the idea evaporated while I slept.  Thank goodness I did, because all I could remember in the morning was that I had had an idea, but the details were rather sketchy.

Do you ever have something you want to work on but have to put off because something else really, truly has a higher priority?  I don't know about you, but I find it really motivates me to get that priority dealt with! After a longer wait than I liked, I was finally able to cut into those strips and less than a week later I had a finished quilt top. 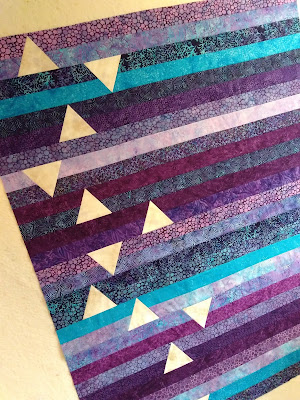 This is just a progress shot.  I'm a little surprised to find as I write this post that I don't have a picture of the finished top!  Hmm.  OK, this is where I admit that I hadn't quite finished dealing with that higher priority task.  My guilty conscience probably got in the way of pausing for pictures when I finished the top.  Playing with the purples really did recharge my batteries to finish that deadline project though!
at October 25, 2019