Why does it always take longer than I expect to quilt a quilt?  Honestly, I think even if I doubled my estimate, the actual time would expand to double that number.  It's just how things are.

I basted Starlit Picnic on Friday, and was sure I'd have it quilted by Sunday night.  Despite spending a large part of the weekend and most of yesterday quilting it, I don't foresee a finish until tomorrow evening at the earliest. 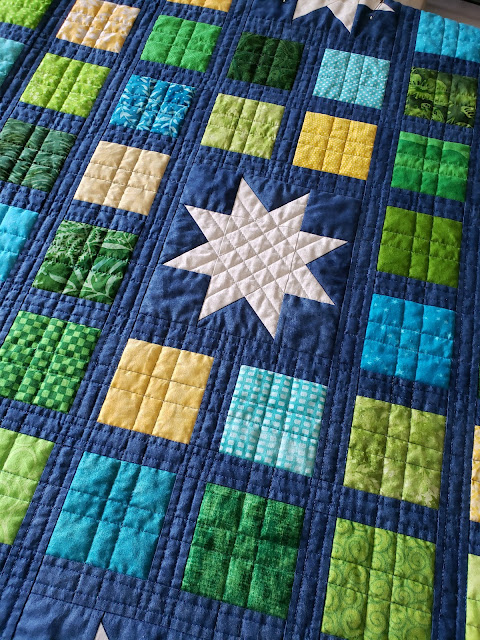 I suppose it's taking so long because I'm quilting more densely than I usually do.  I had planned light quilting, as that's my preference.  First I stitched straight lines up and down and across in the ditch of the squares.  That looked a little underdressed, so I added more lines in the sashing, 1/4" from the squares. 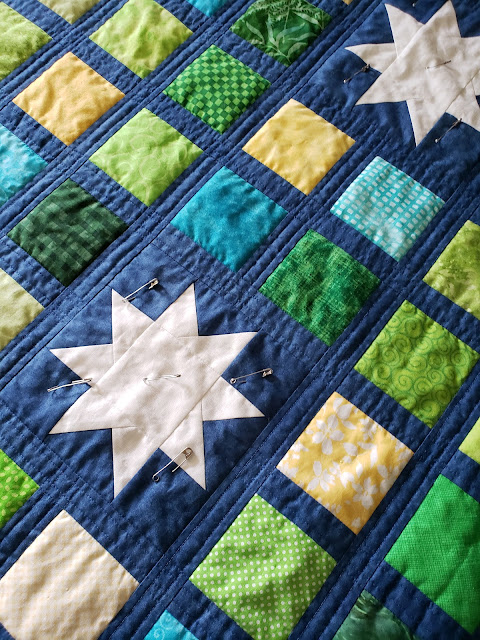 That dressed up the background/sashing quite nicely, but look at the puffiness in those squares.  That's what happens when some areas are quilted more densely than others.  Sometimes that's a fine design element, but in this case it just looked messy and unfinished.

While we're on that topic, why is it that uneven quilting density makes less densely quilted areas puff in the top, but everything is perfectly flat on the back?  I'm stumped.  Please share your theory! 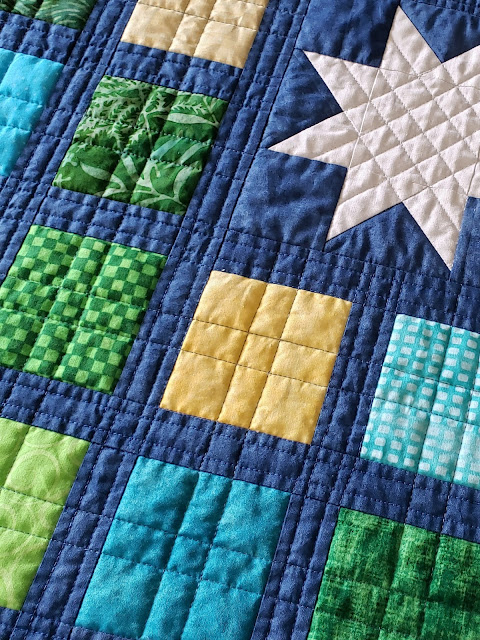 Moving right along...  Adding additional lines marching through the squares helped reduce the puffiness.  The size of these squares doesn't lend itself to neatly dividing into three equal parts, so I didn't try.  I focused on symmetry instead.  I think this turned out pretty well.  Overall, the effect of all the lines intersecting in the sashing and in the squares reminds me of a plaid pattern. 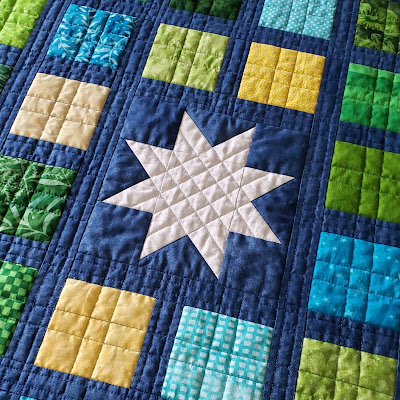 The star needed dense quilting to match so I stitched in the ditch around it and filled in with crosshatching.  I thought that echoed the gridwork in the rest of the quilt, but I put it on the diagonal to add a little contrast and interest.  I'm still on the fence about the background of the star.  I considered outline quilting 1/4" outside the shape, but now I'm leaning towards just leaving it.

I have 10 more stars to quilt, then I'll need to figure out the border quilting.

This will be the cover quilt for my new Starlit Picnic pattern.  I had planned to release it this week, but I need a cover photo first, which means it's all on hold until I finish quilting and have a finished quilt to photograph. I need to step away from the computer and towards the sewing machine now!