I have a new pattern coming out in September (at least, that's the plan).  I challenged myself to make the cover quilt entirely from my stash. 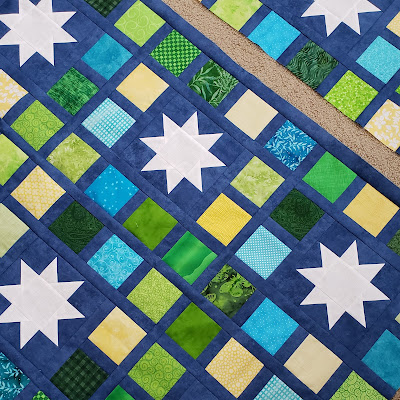 I don't have a lot of yardage in my stash.  I mostly have leftovers from previous projects, usually no more than half a yard of any one fabric, so my options for the background/sashing were limited.  It turned out the blue you see above, and the white I ended up using for the stars, were the only fabrics I had enough of to make the sashing and borders.  I liked the pop of white stars on blue, so I was good to go for the stars and background.

My original thought was to delve into all the colour bins for the squares, but it was just too loud.  I think all the colours would have been fine against white or black, but with the blue it just was an assault on my eyes.  My daughter helped me narrow down the colour palette.  It's still bright and scrappy but a little bit more controlled.

I finished the quilt top over the weekend and turned my thoughts to the backing.  I turned to the overflowing blue bin for that.  To add more interest I also sorted through my bin of orphan blocks and pulled out any blocks and assorted spare parts in blue, green and yellow to match the front of the quilt.  Some of these bits and pieces have been in the bin for years "just in case" I could use them someday.  Someday has arrived! 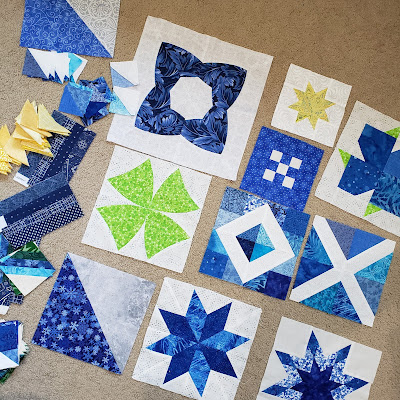 I cut up some leftover strips sets and mashed them up with some HST to make new blocks from small parts. 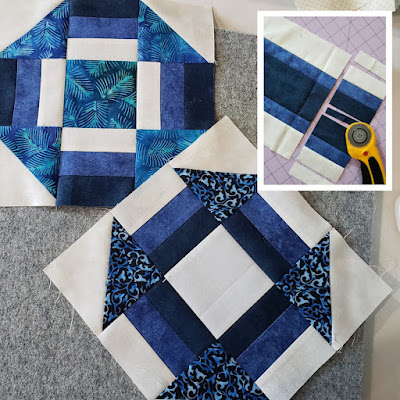 Some small parts were strung together into new elements, and some were sewn to blocks to make larger sections. 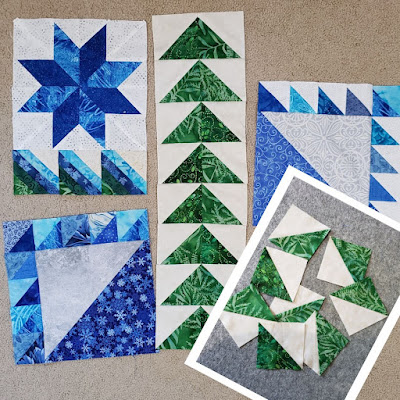 Next, I'll start adding blue scraps to one or more sides of blocks and sections.  My strategy is to build up parts to one or two common widths, then sew them in rows or columns.

I'm starting to get an idea what this frankenback is going to look like.  It would be easier with a design wall.  I had one of those, just batting tacked to the wall, but something started growing on it. I'm not sure what it was or why it appeared after the batting had been on the wall and doing fine for years, but that piece of batting headed to the trash.  I haven't replaced it yet and was using the floor.  However, while my son is between apartments for a couple of weeks, all his worldly belongings are stacked in half of my studio.  He has more stuff than I thought, and it's taking up my design floor!

I'm going to spend the rest of the day happily stitching and laying things out in a smaller patch of floor.  I'll report back when I have a completed backing to share.

How do you feel about pieced backings?  Love them or not?  Too time consuming? Intimidating? A fun creative challenge?  Let me know in the comments, and please feel free to share any backing tips!