One more border down

I finally decided what to do for a border on my flying geese quilt!
I had planned to piece a border of colour rectangles end to end but decided it wasn’t the look I wanted.  I then visited the local quilt shop with quilt in hand and came home with the perfect fabrics for a pair of plain borders. Of course those fabrics turned out to not be right either so in late October this quilt went into the UFO bin.
After finishing the top for Whimsy on New Year’s eve, border battles included, I was inspired to take another look at these borders as well and spent a couple of days auditioning fabric in various configurations.  It’s funny how I came almost full circle to my original idea, with a pieced border made up of all the quilt’s colours. I just placed them in a piano key pattern instead of end-to-end.

Enough chat.  Here’s the quilt, all my own pattern: 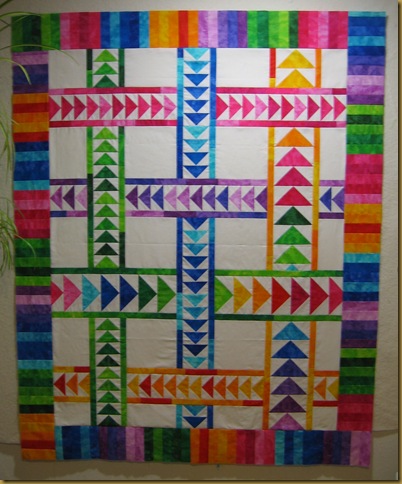 Hmmm,  I really think it looks better in person.  I suppose I could have waited for better lighting to snap the picture…
I considered putting in a narrow inner border between the center and the piano keys, but nothing seemed quite right.  Looking at the picture I think it could use one, but  full size in person it doesn’t seem to.  Doesn’t scale just mess with the mind?
I’m planning to machine quilt this one.  I have a few ideas, but I’ll let them simmer a little before I start to be sure I end up with what I like.  I do know I plan to bind the quilt in the two fabrics I intended for borders: 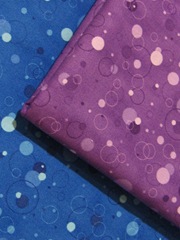 No name for the quilt yet.  Maybe Wandering Geese since they don’t seem to know which way to head?
at January 06, 2012