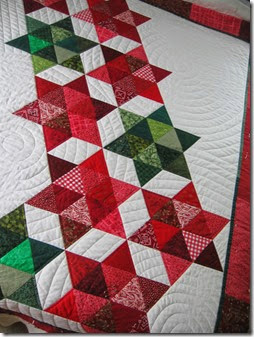 Yay!  I finished quilting the background spirals on my red and green star quilt yesterday.  It was a bit tedious but I think it was worth it in the end.  I still have to figure out what to quilt in the borders, so there isn’t a finished quilt to show yet, but in the meantime I thought you might enjoy a quick explanation of how I marked (or didn’t mark) the spirals.

These large spirals were inspired by the ones demonstrated by Jacquie Gering in her Craftsy class “Creative Quilting with your Walking Foot”.  She only marks the center circle and the line that extends from that circle to the next round.  From there, she just quilts a set distance away from the previously stitched round, around and around in a spiral without stopping. 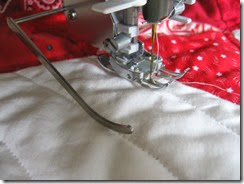 I used a guide arm that attaches to my walking foot, lining it up with the stitched line, to keep my needle a more-or-less constant distance from the previously stitched line.  (This picture was taken after the fact, so just imagine that line of stitching in front of the needle isn’t there yet.)

As I wrote in my previous post, I wanted the stars to float on top of the background spirals, which required the spirals to stop at the star fabric and continue in the next bit of white background.  Without stitching in the star, I lost the guide for where the curve should land once the spiral reached the diamonds on the far side of the star.  After trying to guesstimate (unsuccessfully) and mark (also not very successfully)  I decided to go ahead and stitch away on the stars as I went around the spiral, use those stiched lines as my guides, then rip those stitches out once I didn’t need them as guides anymore.

What???  Trust me, it wasn’t as awful as it sounds!  Here are the details. 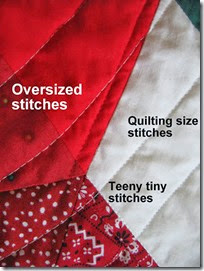 1. Just before reaching the star, I changed my stitch length to .5 to make about 10 tiny stitches to secure the line of stitching.

2. Without breaking the thread I the changed to the largest stitch length my machine allows and stitched merrily across the star fabric.

3. When I reached white background again, I once again switched to the tiny stich to secure the line of stitching, then to a normal quilting stitch length (I usually choose 3 on my machine), then back to the tiny stich again just before reaching the next bit of star fabric.

4. I continued on in this way, changing stitch lengths as needed, stitching continuously around and around the spiral. 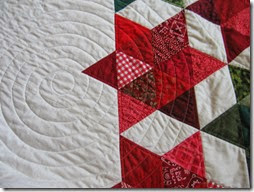 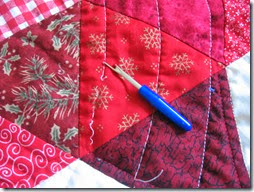 5. Once the spiral extended as far as I wanted it to, I took out the seam ripper and ripped out those large stitches on the star fabric.

Because they were such large stitches they were very easy and quick to remove.  The tiny stitches at the beginning and end of each line stitched in the white kept those parts secured even as I ripped out the rest.  You can see in the picture above that I forgot to set a larger length in the red on that last round  Ahem! That line came out, just not as easily as the rest, so if you try this interrupted spiral don’t forget to switch stitch lengths! 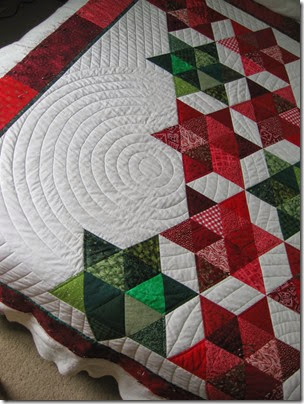 That’s it for the interrupted spirals.  Now to go choose something appropriate for the borders….