Which Way North arrived safely at its destination and the recipient had a stab at figuring out where the name came from.  This one quilt went to my father-in-law, who is retired from the Canadian Air Force.  Honestly, I like his explanation better than mine:

“Your name for the quilt was most appropriate; some of the most interesting and enjoyable flying I did in the 25 years or so in the air force were the flight over northern Canada. Seeing the wild life one only saw in photographs; musk oxen forming their defensive circles when startled by our overflights; mother polar bears on the ice with their young standing on their hid legs inviting us to come down lower if we dared; millions of Snow and Canada geese forming to start their fall migrations south; the beauty of the desolation of the northern landscape and thousands of icebergs in the Davis strait and Baffin Bay starting their journey south to Newfoundland waters.”

Sigh.  That’s so much more poetic than the actual origin of the quilt’s name.  I named the quilt after a goof, ooops, error.  It really is subtle though, and unless you’re a pilot or flight navigator you wouldn’t notice.

If you remember from my previous post, my husband suggested adding runway numbers to the quilt’s borders.  Since his dad spent the greater part of his time in the Air Force at one base, my husband looked up the runway numbers for that airstrip, and showed me the diagram of how the two runways were laid out. 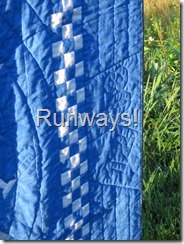 I thought I had it.  I measured angles and everything!  I quilted away. When my husband got home I proudly showed him what I had accomplished.  He said it looked great, but I noticed a look on his face as he studied the quilt.  It was a look that said there was something wrong but that he thought keeping it to himself was the right thing to do.  Still, after being married to him for the last 20+ years, I’ve gotten pretty good at reading his face and I made him spit it out:  I had the runways reversed!

Guessing, correctly, that the stitching was staying as it was, because the quilt needed to go in the mail ASAP, but that I was unhappy with the goof, he stared at it some more, and announced that all was fine.  As long as we declared the bottom of the quilt “north”, rather than the top, as we’re used to seeing on maps, everything was consistent.  Yay!  By the time we named the quilt as I stitched the binding on, we were having a grand old chuckle about the puzzle we would set for his dad and that’s where the name came from. 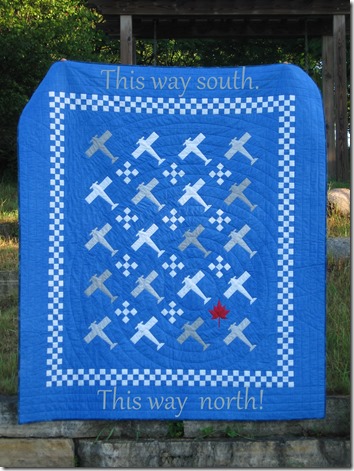